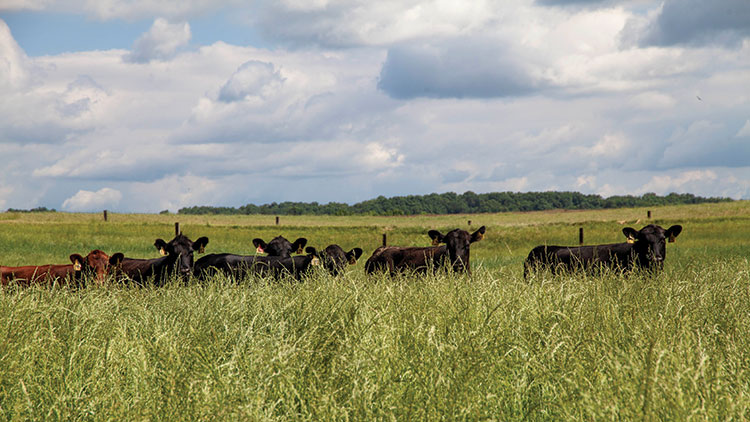 Sitting in a rocker on a wrap-around porch, I found myself staring out at hilly, green pastures split by a gravel road that runs into a wooded area. The sky was the clearest it had been all week, and the breeze was creating ripples in the grass.

The view, which looked like something out of a movie opening, came along with a farmer turned businessman story that was fit for the big screen as well. For an hour and a half, I sat on that porch with Dave Fischer, the fourth-generation owner of Fischer Farms, and listened as he passionately talked about his operation and the industry he’s a part of.

The southern Indiana farm was established in 1870 and consisted of 332 acres during Fischer’s childhood. He reminisced on how the cows were raised behind the house and pigs roamed around the farm. Since then, the Fischer farm has seen many additions and changes and is now a 750-acre, natural-beef operation with tentacles that include a processing and distribution business. 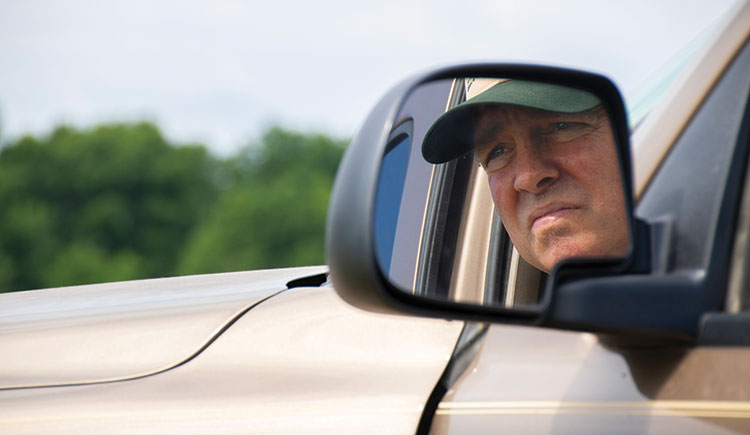 Dave Fischer can talk about ryegrass all day. He has 225 acres in a ryegrass-corn rotation.

“I could talk about my ryegrass all day,” Fischer said. “Just ask my wife,” chuckled Indiana’s representative in the 2018 American Forage and Grassland Council (AFGC) spokesperson contest.

When Fischer first started grazing the fragipan soils, with layers that restrict water flow and root penetration, his crop acres were harvested for corn silage, then cover-cropped with wheat, and everything was baled. “We struggled with moisture, just like most farmers around here. Hay was just too wet or too dry,” Fischer explained. Over time, he began to look into other options.

He landed on ryegrass and began the unique system he uses today. Fischer currently plants two varieties of annual ryegrass, Winterhawk and Bruiser, which he chose for their winter survivability.

From October to March, the cattle graze on the ryegrass pastures where he hopes to get at least two good grazings a season. After the cows are pulled off the pastures in March, Fischer lets the ryegrass grow to 3 feet tall before chopping it for silage.

Once harvested, the fields are planted to corn, and the cattle graze on native Kentucky 31 (KY 31) fescue pastures. In the fall, the corn is harvested as silage, and the system then repeats itself.

In between harvest and planting, Fischer will often apply manure and sawdust on the pastures to return some of the nitrogen and natural nutrients to the soil. He sprays the ryegrass after it’s harvested for silage to prevent it from competing with the corn.

All of the corn silage is stored in a pit and is fed as a total mixed ration (TMR) with corn, ryegrass silage, and some distillers grains.

“What won me over was how aggressive ryegrass roots are. I worried about surface compaction from the tractors and choppers during harvest,” Fischer noted. With time, those aggressive roots made all the difference.

In October 2017, Lloyd Murdock, an extension soils specialist with University of Kentucky, came out to Fischer’s farm to study the nearly impermeable fragipan and found that the ryegrass, which was 24 inches tall, had roots that extended 29 inches deep into the soil.

After three years of planting ryegrass, the fragipan was 13 inches deeper in the ryegrass pastures than those with tall fescue. The aggressive ryegrass roots broke through the fragipan and released chemicals to further mitigate the undesirable soil situation. This allowed corn roots to grow deeper into the soil and have overall better growth.

All of the fescue pastures are KY 31 and have the toxic endophyte. He finds that most of his cattle are over conditioned from grazing on the ryegrass and being fed a TMR by the time they are moved to the fescue pastures, helping to compensate for any lower performance on the permanent pastures.

Cattle on the pastures and in the barns

Currently, there are 450 cows that graze on his pastures and calve each year. Fischer buys the remaining needed calves from four neighboring producers, finishing around 650 cattle per year.

Fischer uses a biseasonal calving system with his cows calving in April and May for the spring season and October and November in the fall. Since the calves have some variability while finishing, his system, coupled with the calves supplied by other producers, covers the entire year of sales. Around 100 heifers are kept each year as herd replacements.

Fischer artificially inseminates (A.I.) all his first- and second-calf cows. If time permits, he will A.I. older cows but usually uses a bull to breed them. Cows are inseminated with hand-selected Angus and Shorthorn bulls to ensure calves have the genetics for good marbling. Fischer also keeps some bull calves of his own to use for both A.I. and bull breeding.

Calves are usually weaned at 6 months old but are weaned later if grass is available. Once weaned, they are moved to their own pastures where they are free to graze and are fed a TMR.

At around 1,000 pounds, the cattle are moved to the finishing barn where they are exclusively fed a TMR. Fischer ensures these cattle are comfortable to avoid excess fat burning and keep them from gaining too much muscle. He over finishes the cattle by a month to six weeks, making sure the animal has the appropriate amount of marbling.

Farming wasn’t always Fischer’s primary occupation. Before 2002, Fischer worked in the computer software industry and lived in town. He explained the family farm was not suited for crops when he returned, and so he began expanding the cattle business — never with the intention of producing naturally raised beef.

Quickly, Fischer was faced with the challenge of finding a premium price for his cattle. “We found that there wasn’t a premium for feeder cattle, so we decided to start finishing them out,” Fischer explained.

He couldn’t find a buyer to provide a set premium for his naturally raised cattle. “I just couldn’t get any of the big guys to lock down a price,” he said.

Fischer doesn’t use growth hormones or antibiotics past weaning. Frustrated with the market, he began to move to direct sales in 2004. “My daughter and I went knocking on the doors of 17 restaurants one day and got one yes,” Fischer recalled, “And to this day, that one buyer is still purchasing from us.”

Since securing his first customer, word spread, and he now serves 130 customers including restaurants, smokehouses, and even some colleges. On average, Fischer Farms sells about 15 homegrown steers and 80 hogs each week. A neighboring farm provides the hogs. “The key is to grow at the right rate,” Fischer notes. “We ship almost everything out each week and keep very little inventory.”

In the first five years, Fischer did all the sorting and distribution himself. Each steak was quality checked by him and was delivered personally to each of his customers. Fischer eventually passed on the fulfillment process to his wife, Diana, and a company in Indianapolis now handles the distribution, but he still tries to keep a close relationship with his customers.

Pride in his business

Potential buyers often tour the farm to see how and where the cattle they will be purchasing are raised. In a typical month, Fischer hosts three customers, both potential and existing, for a tour of the farm. “We have never had a potential customer come out to the farm and not buy from us,” he said with a sense of pride.

In their supplied restaurants and stores, Fischer’s customers also display a similar type of pride. He explained, “They will often have notes next to their products indicating that the meat was natural and fresh. They also will put our name on their menus, which helps bring in future customers.”

Along with his retail customers, Fischer takes promoting fresh, natural beef and the agricultural industry into his own hands. He often takes time out of his schedule to visit local colleges to provide samples and speak to students about the sustainability of agriculture. He promotes it and stands up against the common misconceptions associated with raising and eating meat and the impact the industry has on the environment. Unlike most ag advocates, he doesn’t target farm youth but rather those who get their information from the internet.

Expansion on the horizon

As we watched the sun move across the sky, Fischer and I discussed the future of the farm and the business. “The goal is for a 20% expansion each year,” Fischer explained.

He noted that he doesn’t want to process meat or start selling independently in a store or restaurant. Instead, he has started to look into expanding their overall market across the country. Fischer’s son, who currently lives in Chicago, is working to get new customers and start a market in that area. Fischer explained the goal is to continue growing and eventually pass the business and farm onto his son.

“The biggest struggle we have is finding places to keep more cattle,” Fischer noted. He explained that he utilizes the pastures of retired farmers who are willing to check up on the cattle. This allows Fischer to buy or rent land that is farther from the home farm since he doesn’t have to spend extra time traveling to check on the cattle.

Fischer’s passion for the land and the agricultural industry is on a contagious scale equal to a rampant virus. That passion is exercised by his drive to grow ryegrass, improve his soils, and generate a meat product that meets the high standards of both him and his customers. Striving for this perfection consumes the majority of his schedule, but his deep love for the land pushes him to always take the time to sit back in his rocker and enjoy the view from the porch.

His is the land of misfit cows Next

He zigs when others zag Previous