Be prepared for potato leafhoppers 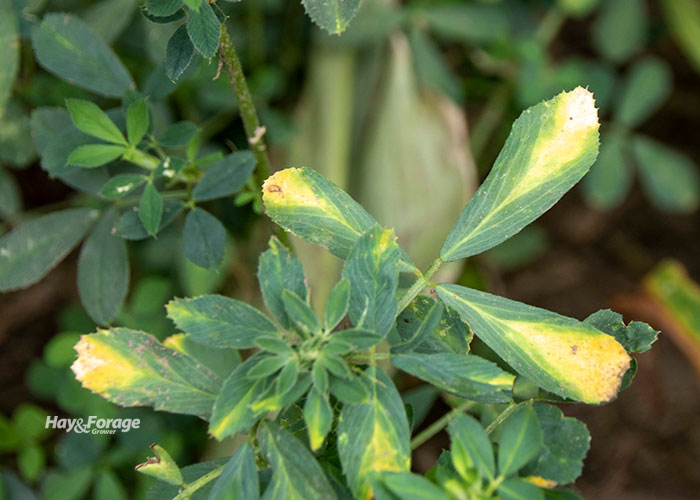 Despite their name, spuds aren’t the only thing potato leafhoppers snack on. They also have an appetite for alfalfa. The insects feast on forage in the summer, and this season’s weather patterns call for a greater number of guests at the dinner table.

Philip Kaatz with Michigan State University Extension says his state has experienced a drier and warmer spring than normal. The same can be said for many other alfalfa-growing regions this year. These conditions are expected to persist into the months ahead, and Kaatz is predicting a potato leafhopper outbreak.

Both nymphs and adult potato leafhoppers cause damage. The insects suck sap out of plants and inject their saliva as they feed.

“Potato leafhopper’s saliva results in abnormal cell growth and blockage of fluid transport in the leaf,” Kaatz explains. “Because of the damage, reduction of yield, forage quality, plant vigor, and winterhardiness will occur.”

Early feeding is of highest concern. New seedings and fields with regrowth less than 3 inches are most susceptible to being pestered by potato leafhoppers. Kaatz encourages farmers to scout for the insect once regrowth appears. Look for hopperburn, or the yellowing of alfalfa leaf tips.

“Unfortunately, once hopperburn is visible, the damage is done,” Kaatz says. “It is already too late to prevent the effects of the damage. With yellowing of the plants, yield reduction has already taken place.”

Limit damage before it destroys

Utilizing an integrated pest management approach is recommended to avoid such circumstances. Before administering insecticides, use a sweep net to determine if the economic threshold has been reached.

Sweep the net through a stand of alfalfa 100 times, breaking up the repetitions into sets of 10. Relocate to a new area of the field with each set. Then, count the number of insects trapped inside the net.

If the economic threshold is met or exceeded, the preferred method of pest control is cutting. However, insecticides can be used as long as they are applied responsibly.

“It is better to spray smaller plant regrowth rather than taller growth,” Kaatz says. “If sprays are used, only use approved insecticides labeled for potato leafhoppers and follow all label requirements.”