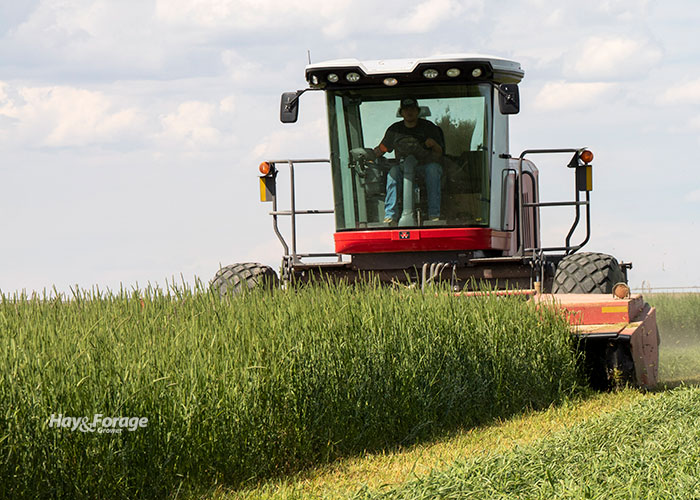 If the early bird gets the worm, the early producer gets the high-quality hay. This time of year, hay is being stored for winter feed, and a timely cut is key to optimizing cattle nutrition and performance.

Although it is assuring to have a barn full of bales, what’s more important is that stored bales are of high quality. Katie VanValin, an extension beef specialist at the University of Kentucky, reminds farmers that cattle have nutrient requirements, not bale requirements.

“At the end of the day, it won’t be a certain number of bales that maintain a cow herd,” VanValin says. “Instead, supplying enough pounds of total digestible nutrients (TDN) and crude protein will meet the cows’ nutritional requirements.”

Stage of maturity at harvest is the most significant factor in determining the level of energy and protein hay has to offer. VanValin explains in a recent issue of Off the Hoof that leaf to stem ratios decline as plants mature, which means there are lower protein concentrations and larger amounts of indigestible fiber in the forage.

The best way to ensure optimal levels of energy and protein is to cut hay early. This is easier said than done, though, as cool-season forages grow rapidly in the spring and offer a short window of opportunity to harvest.

Wet weather also expedites plant growth and added moisture makes finding a time to cut hay challenging. However, thinking ahead and working diligently around these setbacks will improve producers’ chances of success.

“It can be easy to miss the optimal stage of maturity to capitalize on forage quality,” VanValin says. “Luckily, it takes the same amount of time to cut, rake, and bale good quality hay as it does poor quality hay.”

Slow down on supplements

Hay is the base of most cattle rations, and the goal is to meet as many of the cow’s nutritional requirements as possible with the forage. This reduces the need for supplements, which also reduces costs. The table below provides an example of the cost of supplementation based on hay quality with an 80:20 soyhull and dried distillers grains with solubles (DDGS) blend at $210 per ton.

VanValin says while farmers can test hay to make sure their herd’s nutrient requirements are being met, the best way to guarantee this is getting in the field sooner rather than later.

Henning, an extension forage specialist with the University of Kentucky, says the earliest cut hay had the greatest levels of digestibility and crude protein. Intake of the earliest cut hay was also greater – heifers ate 13 pounds per day compared to 11.7 pounds and 8.6 pounds for the later cuts.

Higher intake translates to greater gain per day. Henning reports heifers gaining up to 1.39 pounds when fed the early-cut hay. Not only were these cattle gaining more, but they were doing it in a fraction of the time.

“If you calculate how long it would take to equal gains on hay, you arrive at 95, 140 and 298 days, respectively,” Henning says. “Hay cut on May 25 could produce the same gain as hay cut on May 3, but it would take twice as much hay and three times as long.”

In addition to the nutritional and financial benefits of getting a head start on hay, farmers will have a more flexible cutting schedule for the rest of the season. Henning says wider harvest opportunities will come with more favorable weather in June and July.

The great pasture-clipping debate Next