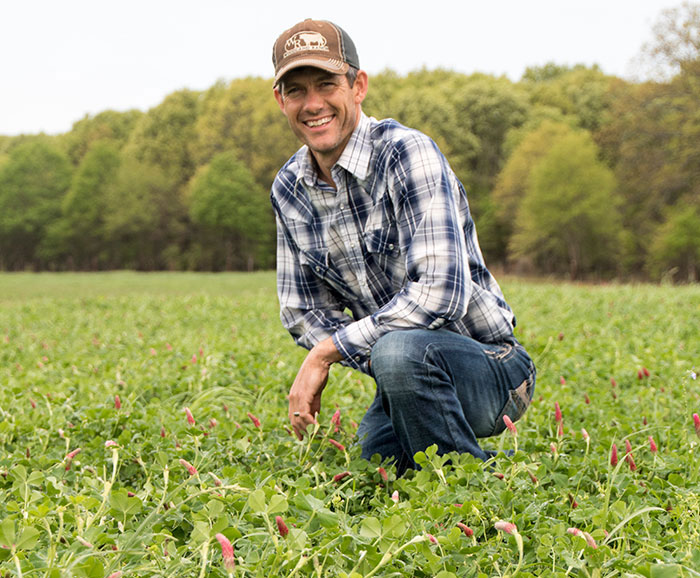 Perhaps no flowering legume catches the eye more than crimson clover. Native to southern Europe, farmers and ranchers in the southern U.S. noted its value as a green manure and grazing crop by the mid-1850s. Since that time, the species with the distinct red flowering seedhead has proved its worth both in photographs and as a valued forage resource.One rancher who continues to be sold on the value that crimson clover offers for a beef operation is Scott Williams, who manages Woodland Ranch near Alba, Texas. In the rolling hills of East Texas, Williams seeds nearly 300 acres of crimson clover each year. The annual legume is grazed through the winter and then cut and harvested as baleage in the spring. The Woodland Ranch beef herd consists of 270 cows, evenly split between fall and spring calvers. They also raise a portion of their young stock, including bulls, for the seedstock market. Registered Angus comprise about 60 percent of the herd, with the remaining animals being commercial. A small Belted Galloway herd is also maintained. Williams’ wife, Lori, assumes the duties of administration and operations manager.“During the summer, we rely pretty heavily on common bermudagrass, which is native to this area,” Williams said. “We’ve also established about 80 acres of Tifton 85 bermudagrass and another 50 acres of Coastal bermudagrass.” The ranch manager places bahiagrass in the weed category.Williams really likes the Tifton 85 and hopes to establish some additional acreage. “It’s almost like a different species, but it’s important to get it fertilized with nitrogen,” he said. To meet the needs of the bermudagrass, Williams uses both chicken litter and purchased urea. He also soil tests each year. The Tifton 85 pastures are sprayed with a pre-emergence herbicide each spring for crabgrass control.Woodland Ranch stockpiles several hundred acres of bermudagrass each fall for winter feeding, but that’s not enough to meet the nutritional needs of growing calves and lactating cows. That’s when crimson clover comes into play.Crimson rulesThough arrowleaf clover is native to the ranch’s pastures, Williams seeds about 200 acres of crimson clover into his nonstockpiled bermudagrass pastures each fall around September 20. He first gives the fields a light disking, then broadcasts 15 pounds per acre of crimson clover seed. Finally, pastures are lightly dragged to enhance good seed-to-soil contact. “We begin rotationally grazing the crimson clover in January,” Williams said. “We use it like a supplement, allowing cattle access to the pastures for about two to three hours; then we move them back to the stockpiled bermudagrass or feed them dry hay.” Williams makes about 1,400 bales of dry bermudagrass hay each year, and what Woodland doesn’t use is sold to neighboring ranches.Many ranchers are concerned with the bloat risk that is associated with succulent legumes such as crimson clover. “We’ve only had two animals in five years that showed symptoms of bloat,” Williams said. “It’s really important to also feed dry hay,” he added.Williams has given thought to also trying Blackhawk arrowleaf clover, a variety developed at Texas A&M University, but he’s concerned that it might continue to grow too late in the spring and compete with the bermudagrass. Crimson clover, on the other hand, is known for its exceptional seedling vigor, prolific winter growth, and an early departure in spring, which matches perfectly for overseeding warm-season perennial pastures. “By mid-April, the crimson clover usually plays out,” Williams noted. During that last breath of life, the picturesque legume grows back about 6 inches and sets hard seed. It’s this seed that helps populate pastures with new plants come fall. Finally, Williams sprays his pastures with metsulfuron and 2,4-D to suppress weed competition as the bermudagrass comes out of winter dormancy. 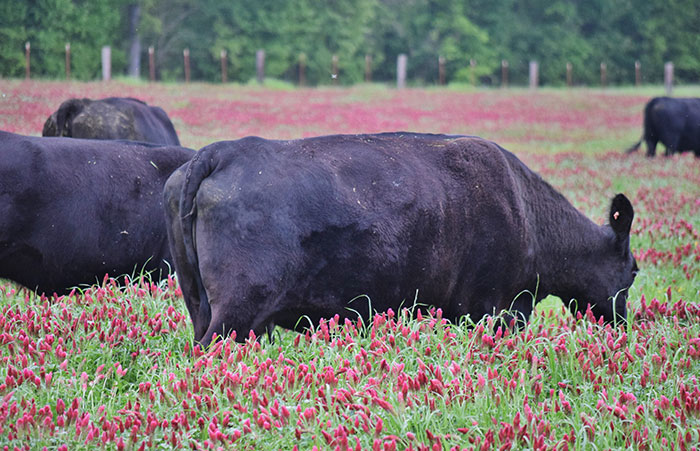 Photo Credit: Lori Williams A game changerWoodland Ranch’s affection for crimson clover doesn’t stop as a grazing legume. They also make baleage — 1,250 bales in 2016 to be exact. “It’s been a real game changer – the best tool I’ve ever invested in,” Williams said of his in-line bale wrapper, which is used for both crimson clover and bermudagrass baleage. The spring-made crimson clover baleage is fed in the same way a supplement would be beginning in early November. Williams likes to make his clover baleage at about 65 percent moisture; seven layers of wrap are used. The bermudagrass is wrapped at 45 percent moisture. All of the bales are net wrapped after being rolled to about 60 inches in diameter. His dry hay bales are slightly larger at 66 inches. Williams noted that his crimson clover baleage has tested between 15 and 24 percent crude protein and 54 to 67 percent total digestible nutrients. “The baleage has drastically reduced the amount of supplement that we have had to purchase,” Williams noted. “Our liquid feed supplement needs dropped from about 75 tons to 35 tons,” he added.

You can learn more about the Woodland Ranch operation at www.woodlandranch.com.

Drown or fry? Next