Early adopter is an understatement 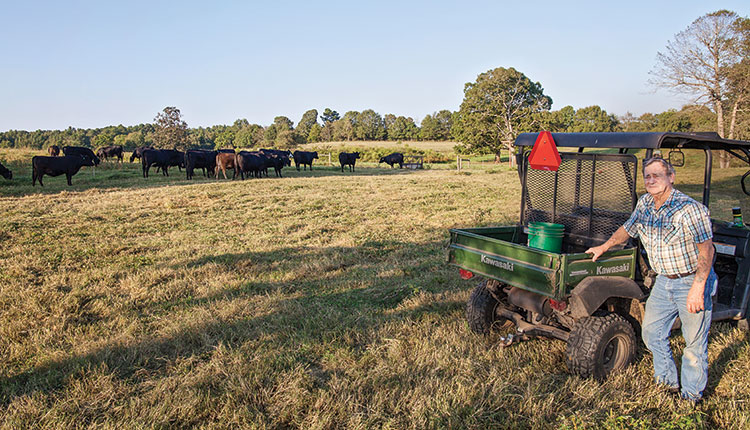 Ted and Patsy Hughes take land stewardship seriously. Over the course of nearly 50 years they have transformed a worn-out cotton farm into a productive, rotationally-grazed grass mecca.

There are some people you meet in life whom you’ll never forget, nor do you ever want to. For me, count Ted and Patsy Hughes in that category. 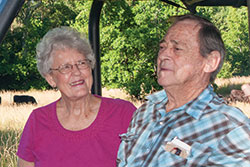 Patsy and Ted Hughes
Ted, an amiable Georgia cattleman from Comer, Ga., has lived a life of grass like few others. Talking to Hughes about rotational grazing is much akin to having a conversation with Thomas Edison regarding the lightbulb. Unlike Edison, however, Hughes is very much alive and active at the age of 75.

“In 1966, my wife, Patsy, and I bought 25 acres of the farm where she was born and raised; it was a worn-out cotton farm,” explained Hughes last fall from the kitchen table in their home. As a matter of fact, at that time, Oglethorpe County was a giant, red sore on the map. Farmers tilled the soil and grew cotton until there was no topsoil left.”

After spending some time in the Navy, Hughes tried his luck at the University of Georgia. “I loved agriculture and wanted to learn but really struggled with some of those first classes,” Hughes said. “I was way out of my league.”

Hughes, however, was as likable then as he is today and developed a rapport with several of his professors. As it turned out, instead of learning in their classrooms, the professors and Hughes flipped the switch and turned the small Hughes farm into a learning and teaching laboratory. Essentially, Hughes would be homeschooled with his farm being the classroom.

That role continues into the present.

“At the time, Elvis Beaty was the Georgia forage agronomist,” Hughes recalled. “He came out to my farm and we talked. He recommended that I start something called rotational grazing. He said, ‘Ted, people will probably laugh at what you’re doing, but you’ll be way ahead of your time.’”

That conversation was the beginning of a long road and learning curve. In 1970, Hughes started simple by splitting a few pastures for his cows. Through the years, additional land was purchased and rented, mistakes were made, more fences were installed, and the cattle herd grew.

The red dirt, over time, turned green with grass. Along with it, the soils became more fertile and were able to produce even more grass and legumes. As it turned out, Elvis Beaty was right — Ted Hughes was way ahead of his time.

As Hughes and I rode around on his Kawasaki Mule, there was seemingly a stop and story or lesson at every fence post. The teaching and learning never stops on Chantilly Farm; nor does the grass stop growing.

These days, the farm consists of 210 acres with 150 owned. Not all of the acreage is grazeable with woods and a couple of ponds dotting the landscape — about 160 acres is in permanent pasture. He keeps the cattle out of the ponds. Instead, Hughes uses strategically placed permanent, concrete water troughs that provide access to multiples of his 28 paddocks.

Many of Hughes’ paddocks are configured into a wagon wheel pattern. With the water source as a hub, fences radiate out like spokes. If needed, paddocks are split with polywire based on forage availability and cattle numbers. Animals are moved frequently through the rotation.

“My cattle are accustomed to being moved; they look forward to it,” Hughes said. Walking among the cows, and even the stockers, the animals were docile, a clear indication that human interaction was not a foreign experience. Hughes also has an indoor facility to work cattle. “It’s easier that way on both man and beast,” he noted. 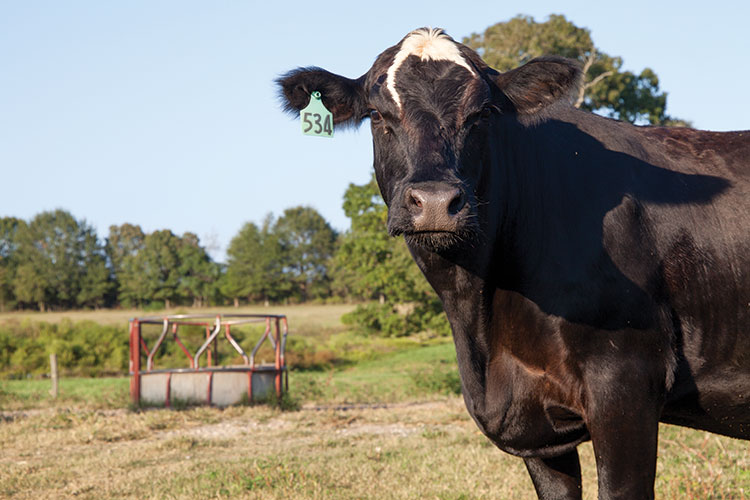 Concrete waterers serve as hubs on Chantilly Farms. Fences radiate from the waterers like spokes on a wheel, allowing the waterers to service several paddocks. 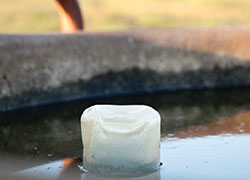 Chlorine pills are put into jars that float in each waterer to help keep the tanks clean.

In addition to moving cattle from paddock to paddock on a frequent basis, Hughes encourages the cattle to move themselves as well within a paddock. A portable mineral feeder is pulled to areas where the animals are prone to undergraze. This generally means someplace away from the water. By doing so, the grass is more uniformly utilized and manure nutrients are spread over the entire acreage.

Hughes, who understandably has reduced his herd size in recent years, currently runs about 35 Angus cow-calf pairs while also backgrounding calves and grazing stockers until they hit 800 to 850 pounds. When I was there, he was also running some of his neighbor’s heifers on extra pasture he had available.

The mostly A.I.-bred herd calves beginning in January. “Cows are a good place to store forage,” Hughes chuckled. “I like to put a lot of condition on cows through gestation. Having a body condition score of around 7 really pays off when that cow calves. You can’t do that, at least economically, without good pastures.”

A cattleman by any definition, it’s the pastures and grass that really gets Hughes’ mind and mouth moving. “I raise cattle, but my cash crop is grass,” Hughes opined.

In the heart of Georgia’s Piedmont region, the pastures on Chantilly Farm are mostly tall fescue-based, but Hughes also utilizes bermudagrass, ryegrass, and clovers. The ryegrass is broadcast or no-till drilled in the fall where Hughes feels it is needed. Chicken litter comprises his main source of fertilizer, using it judiciously not to suppress the legume component of his pastures.

Walking through the pastures, clovers are ever present. Hughes broadcasts white clover seed where needed each fall and winter using a seeder that mounts to his Mule or tractor. Recently, he has used Durana white clover, a variety developed by University of Georgia’s Joe Bouton that has significantly better persistence under grazing compared to ladino clover.

“Having legumes is really important,” Hughes said. “Clover can save you a lot of money on fertilizer, but it also improves livestock performance and adds plant diversity, which helps the soil.” On Chantilly Farm, it also helps to dilute the effects of consuming tall fescue during periods when toxin concentrations are the highest.

Hughes’ pastures are productive and dense, but not necessarily weed-free. “I don’t like to use chemicals, but I will spot spray for problem weeds and brush,” Hughes explained. “Some weeds seem to be pretty palatable to cattle and those just become part of the system.” 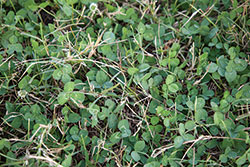 Durana white clover has
performed exceptionally well
If you ask Hughes, the best kind of hay feeder is an empty one. That’s not because the cows ate it all, but rather because pastures are providing all of the needed nutrition.

Each year, some hay is custom made from excess pasture production on Chantilly Farm and stored in a pole shed, but it’s mostly fed as a supplement and kept as a matter of insurance against drought or some other weather calamity. Generally, fields that are cut for hay have poultry litter applied to them.

To maintain the herd through the winter, Hughes stockpiles some pastures beginning in the fall. Cows and calves are kept on pastures throughout the winter, though some hay is supplemented beginning in January. Over the course of a typical year, Hughes’ average hay use is less than one-half ton per cow.

When grazing stockpiled fescue, Hughes is careful not to overgraze, leaving adequate leaf area for regrowth and long-term persistence. A December 2017 interview focusing on Chantilly Farm’s stockpiling program with University of Georgia extension forage specialist Dennis Hancock can be found at bit.ly/HFG-Chantilly.

Grass and cattle production make up only part of the Ted and Patsy Hughes’ story. In fact, they may be the smallest part. What really drives the 2018 American Forage and Grassland Council’s (AFGC) Forage Spokesperson winner is environmental stewardship. Taking care of the land has become engrained in his DNA, perhaps because he has witnessed firsthand over the past 50 years how a depleted agricultural “giant, red sore” can be transformed into a vibrant and productive landscape.

“When I started in the late 1960s, I didn’t know what I was doing,” Hughes said. “Any success Patsy and I had is a credit to the many people who have helped us through the years, grass production, and the ability to conserve and build our soil.”

In his presentation at the AFGC Conference in Louisville, Ky., last January, Hughes remarked, “I view stewardship as an act of reverence to God.” Hughes doesn’t just give environmental stewardship lip service; he truly wants things to be better today than they were yesterday.

Living with that mantra, Hughes speaks with pride about receiving the 2008 Governor’s Environmental Stewardship Award for Agriculture. He and Patsy have twice (1986 and 2006) been recognized as Farm Family of the Year in their local Broad River Watershed.

Ted Hughes left college because it was too tough. However, his unrelenting thirst for knowledge, his humility and ability to listen to others’ advice, a keen awareness of his farm surroundings, his desire to succeed financially while at the same time making his farm a better place everyday have resulted in a lifetime diploma that is unmatched by any college degree he might have obtained. On top of this, he has had a strong willingness to share his knowledge and experiences with others.

He’s one of only two Next