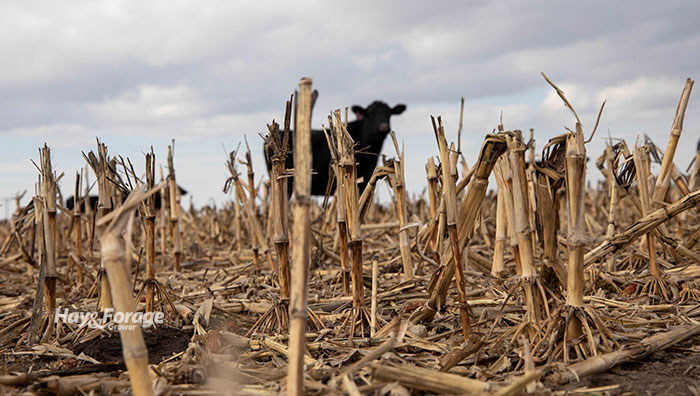 Cornstalk grazing is a tried-and-true approach to wintering cattle in many parts of the United States. What the combine leaves behind can be an economical source of forage with some added, but usually limited, corn grain.

The digestibility of the leaf and husk are typically between 45% and 57% total digestible nutrients (TDN), according to Karla Wilke, extension cow-calf specialist with the University of Nebraska. She notes that research has shown this level of nutrition will maintain nonlactating pregnant cows if stocking rates are moderate and intake is not limiting.

“When grazing cornstalk residue, fall calving pairs present two challenges that their dry, pregnant counterparts do not,” Wilke says. “The first consideration is that lactation can more than double the energy requirement needed just to maintain the cow’s body condition. The second consideration is that the calf will consume at least 1% of its body weight in forage by three months of age.”

A calf’s forage intake is important for rumen development and for nutrient consumption, which impacts growth. Additional nutrition is needed beyond just what milk is providing.

Wilke cites a study conducted by the University of Nebraska that compared the performance of cow-calf pairs grazing cornstalk residue with pairs maintained in confinement. The pairs grazing cornstalks were supplemented with about 5.5 pounds per day of a dried distillers-based cubes that also contained calcium, trace minerals, and vitamins A, D, and E.

The results of that three-year study indicated nursing cows grazing cornstalks from November to April lost about a half of body condition score, even though they received supplement. However, the subsequent pregnancy rates of those cows were not different from cows maintained in a drylot.

“It is also important to note that the average body condition score was 5 to 6, which is moderate,” Wilke says. “In a fall calving system, cows would have time to pick up body condition after cornstalk grazing ended in April and before calving in August or September.”

In the study, the nursing calves grazing cornstalks from November to April gained approximately 1.5 pounds per day, while the nursing calves in confinement gained about 2 pounds per day. A partial budget analysis revealed that due to the reduced cost of cornstalk rental relative to the cost of maintaining the cattle in confinement, the lighter calves produced a greater net profit than the confined calves.

The cow-calf specialist points out that the economics of a complete feeding system needs to be evaluated. In some cases, net profit may be greater even when animal performance is somewhat less than another alternative system.