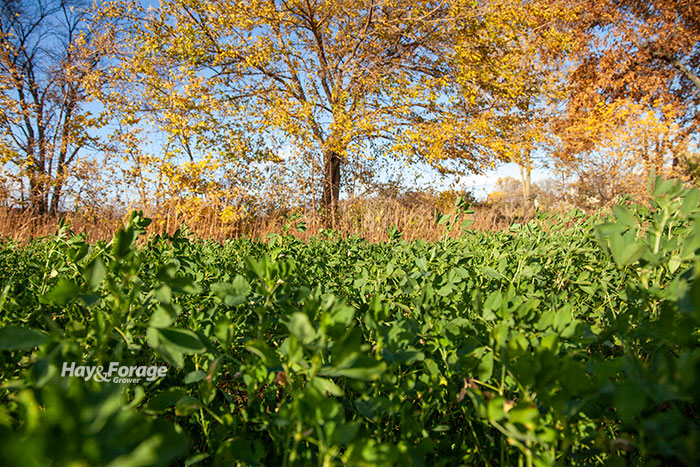 Watching our late-night news last week, the weatherman made his first mention of “frost warning” for the year. Admittedly, it was for much farther north in the state than where I live, but it was a wake-up call that the long underwear will soon need to be located in the bottom of the dresser drawer.

First frosts and freezes also bring to mind the cessation of plant growth, if not life. Fortunately, alfalfa falls in the former category.

It is at the point when alfalfa quits growing that an opportunity for a final harvest exists. Conventional wisdom is that this is a safer time than four to six weeks before a growth-stopping frost or freeze. With the late-fall cut, plants are unlikely to use stored root reserves to initiate new growth.

Through my years of working closely with many alfalfa producers, I’ve found there are three primary reasons why farmers cut alfalfa late in the fall. They are:

In the case where favorable weather has contributed to significant fall growth, it’s hard to leave an apparent high-yielding, high-quality crop out in the field. However, the reality is that late fall-cut alfalfa is rarely, if ever, high yielding.

On the flip side, late fall-cut forage is almost always excellent quality. With the extended cool temperatures, there is low fiber deposition and fiber digestibility stays high.

There’s been a long-held concern by some that fall alfalfa growth will smother and kill a stand over winter. This simply does not happen with a legume such as alfalfa. Rather, leaves freeze and eventually drop off the plant. Stems, for the most part, stand erect. The old, fall aftermath growth may impact forage quality in the next year’s first cutting, but if harvested early enough, the reduction in quality is minimal.

Following a year of severe winterkill or drought, sometimes alfalfa is cut in late fall simply to meet a need for additional feed. It’s difficult to be critical of this thinking, but it will be expensive forage.