Fungicide use to inhibit Aphanomyces 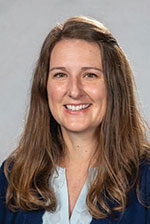 Kiersten Wise Funding:$24,928
Kentucky research that tested the efficacy of fungicide seed treatments and foliar fungicides on alfalfa to potentially manage Aphanomyces root rot wasn’t conclusive. It didn’t show that the products, rather new to alfalfa production, could consistently improve plant populations and yields in alfalfa fields with a history of the disease, said Kiersten Wise, University of Kentucky (UK) plant pathologist.

But the research provided a “great opportunity to get more specific data on an important disease and some practices that are widely promoted,” Wise said. “Fungicides are widely promoted, but there’s not a lot of independent research that shows whether or not they’re worth a farmer’s investment.”

Aphanomyces root rot can seriously impact alfalfa establishment, particularly in poorly drained and heavy soils found in Kentucky. The disease thrives when those soils are saturated after planting and temperatures turn cold. It can kill or stunt alfalfa seedlings and thin stressed stands, so weeds get the upper hand.

Conditions especially favored the disease in her state in 2019, leading Wise to apply for Alfalfa Checkoff funding and look for solutions under the climatic and environmental conditions Kentucky farmers were contending with. Most fungicide research — and resulting university recommendations — come from Northern states, particularly Wisconsin, she pointed out.

This new research “at least gives Kentucky farmers a little more information about how these products work under their production systems,” Wise added. As part of the research project, Wise also co-authored a Crop Production Network resource, called “An Overview of Aphanomyces Root Rot.”

Despite COVID-19 restrictions and limitations in 2020, Wise and Chris Teutsch, a UK plant and soil scientist, applied fungicide seed treatments to conventional alfalfa before planting it on a poorly drained field with a history of root rot. Replicated trials were conducted at the UK Research and Education Center in Caldwell County. Some treatments did increase plant populations but not yields.

The foliar fungicides were applied in 2021 after first cutting to test whether cutting timing and fungicide would impact dry matter yield. “We didn’t see any differences with the foliar fungicides, but we were conducting the research in years where we didn’t have a lot of foliar disease pressure,” Wise said.

The researchers also planned to soil sample alfalfa fields across the state to determine which Aphanomyces race was prevalent. Races 1 and 2 had been confirmed in the state, but it had only been assumed that Race 2 was more widespread. Travel restrictions due to COVID-19 kept them from gathering samples, but they did receive a few samples from county agents. Before those samples could be bio-assayed, they were lost in the December 2021 tornado that destroyed the UK research center.

The only consistent protection farmers presently have against the disease are alfalfa varieties with “race-specific” resistance to Aphanomyces, Wise says. “When we look at recommending new management practices, we want to think about consistency. So, additional research would be needed to see if those results are consistent across broader areas (of Kentucky) and different types of production.”

Fungicide seed treatments may potentially help protect against the disease when alfalfa is established in high-risk areas, including fields with poor drainage or a history of disease outbreaks. To help farmers fight Aphanomyces, Wise and her colleagues discuss variety resistance and ask whether the fields have a history of Aphanomyces outbreaks, as well as other questions. They help determine whether fields are at high, medium, or low risk of future outbreaks.

To access the report, “Improving Our Understanding of Aphanomyces Root Rot of Alfalfa,” or the Aphanomyces overview, visit alfalfa.org.

1. The fungicide seed treatment Rizolex + Apron XL increased alfalfa plant populations compared to the nontreated check and all other seed treatments, but it did not affect yield, ADF, or NDF.

2. Foliar fungicides didn’t increase dry matter yields as compared to the non-treated check on a 30- or 40-day cutting schedule.

3. A soil bioassay to help determine Aphanomyces race structure was not completed due to tornado damage to soil samples and facilities.

This article appeared in the November 2022 issue of Hay & Forage Grower on pages 32-33.

Save water on irrigated alfalfa Previous