Alfalfa establishment that breaks the mold 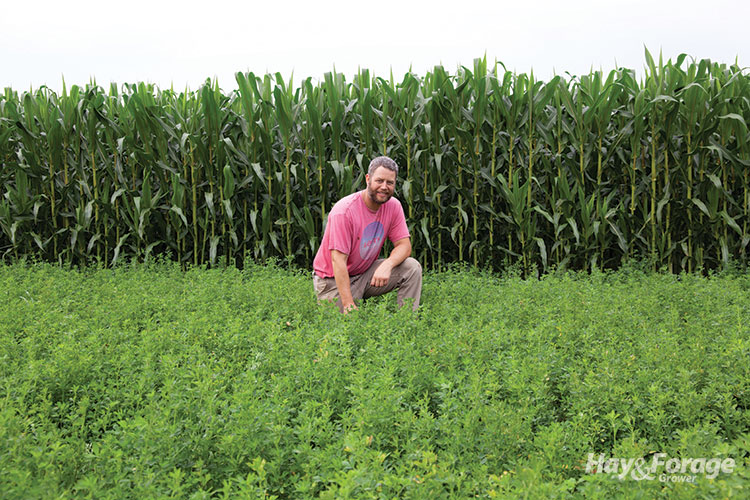 Corey Leis has been establishing alfalfa in the spring by no-tilling into existing stands of winter cereal rye.

Seeding alfalfa in the spring, with or without a small grain companion crop, remains the popular approach for stand establishment in much of the northern United States. Throw in those farmers who prefer a late summer seeding strategy, and that catches just about everyone.

Recently, there has been some extensive research evaluating the possibility of successfully seeding alfalfa under a corn crop that will be harvested for silage. Some growers have been experimenting with this system on a limited basis and are having reasonable success (see “They think out of the box” in the February 2019 issue of Hay & Forage Grower).

In the rolling hills of western Wisconsin, several dairy producers have sought ways to establish alfalfa while still maintaining ground cover to protect their highly erodible soils. One of those farmers is Corey Leis, who farms with his father, Wayne, near Cashton, Wis.

For more than a dozen years, Leis has successfully established alfalfa by spring seeding into a developing stand of cereal rye. Following a corn silage harvest, he no-tills winter rye seed using a 15-foot Great Plains drill. Leis cuts his planting rate to 80 to 85 pounds, which helps reduce future plant competition with the alfalfa.

“In the spring, there’s about a week to a week and a half window to get the alfalfa seeded,” Leis noted. “If the rye is too short, the no-till drill beats it up too much; if it’s over 12 inches, then there’s too much material to deal with. We like to drill when the rye is about 3 to 4 inches tall, but it will work up to 8 inches,” he added. 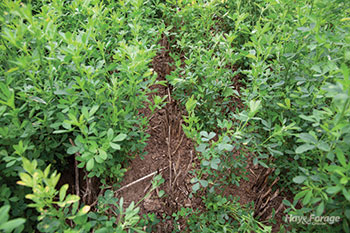 An old row of cut cereal rye can be seen between alfalfa plants on the Leis’ farm. The rye should ideally be 3 to 4 inches tall when the alfalfa is seeded.
Seeding alfalfa into an existing rye crop was an idea brought to Leis by one of his neighbors. “Now,” Leis said, “there are several dairy farmers in the neighborhood that are routinely using the practice. Compared to using spring oats as a companion, you have cover for erosion control so much faster with the rye. Also, the rye comes off earlier than a spring-seeded cereal.”

Although Leis cuts back on his rye seeding rate, he doesn’t seed the alfalfa any differently than when he seeds with a spring oat companion crop. “We seed about 17 pounds of alfalfa to the acre, and that includes the 34% seed coating,” the third-generation dairy farmer explained.

Leis tries to ensure that the rye gets taken off before it heads out. This benefits both the alfalfa underneath and his ryelage forage quality. He likes to harvest when the rye is between 65% and 70% moisture. “If it gets too dry, it packs like a sponge,” Leis said with a smile.

After the rye is off, the fields are allowed to regrow for a short time and then sprayed with glyphosate to terminate any residual rye regrowth. “We get two cuttings of alfalfa during the seeding year and then keep stands for another three to four production years,” he said.

“For the past two years, we’ve been seeding HarvXtra alfalfa varieties and want to see if we can get by with a three-cut per year system,” Leis noted. “I’m hoping that will extend stand life even longer and reduce some harvesting costs.” He hopes to have all of his alfalfa acres seeded to HarvXtra varieties within the next two years.

The Leises farm 1,800 acres of tillable land, which includes 650 acres of alfalfa and 300 acres of corn silage. They feed their 400 milking Holsteins a ration that consists of 45% alfalfa haylage and 55% corn silage. The ryelage is used to feed heifers.

“Our successes and failures with seeding alfalfa into cereal rye are no more or less common than on the acres where we use an oat companion crop,” Leis said. “On our rolling ground, we just like having cover at all times, and this system helps us do that.” 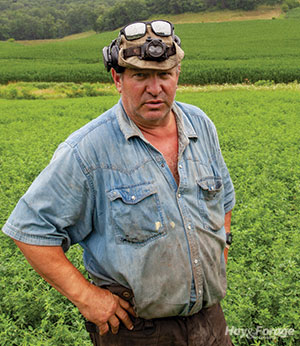 Joe Bragger likes to keep a tight rotation of corn, winter rye, summer annuals, and alfalfa.
Like Leis, Joe Bragger seeded his alfalfa into cereal rye during the spring for about four years. “We quit doing it not because it didn’t work . . . it did . . . but because I saw an opportunity to grow more summer annuals,” said the second-generation dairy farmer from Independence, Wis.

Bragger farms 1,400 acres along with his wife, Noel, and brother, Dan. The son of Swiss immigrants, Bragger is an experimenter. “I’m willing to give just about anything a try,” he chuckled.

The Bragger farm is a series of valleys and hillsides. Forage cover is important, if not critical, for profitability. “I decided several years ago that I really wanted to maximize the energy I got out of grasses and rely on alfalfa for protein,” Bragger explained. “I could only do that if I managed my cereal rye and summer annuals for maximum yield and quality.”

On fields where alfalfa is to be established, Bragger seeds cereal rye immediately after a corn silage harvest, cuts and chops the boot-stage rye the next spring, and then plants brown midrib pearl millet. He takes a cutting of millet 45 days after planting, and then another 30 days after the first cutting. It’s at this point in mid-August that the millet is sprayed out with glyphosate, and alfalfa is established for the next year.

“It just stays so cool up here early in the season that it takes alfalfa forever to really get going with a spring seeding,” Bragger said. “Also, I like to seed some endophyte-free tall fescue with the alfalfa, so I don’t use Roundup Ready varieties,” he explained as a reason why a late-summer seeding is a better fit for their system.

“We hold to a pretty tight crop rotation,” Bragger noted. “One hundred acres of new alfalfa seeding goes in every year. We keep fields for two production years and then in the third production year will only take the first cutting. At that point, corn is immediately no-tilled into the alfalfa sod. At any one time, we have 100 acres in transition with rye, millet, and new seeding and 200 acres of established alfalfa,” he added.

Bragger also grows about 180 acres of Unified and Enogen corn for silage to help feed his 400-cow dairy herd that is housed at three different locations in the area. His remaining acres are cash cropped with corn and soybeans.

With space at a premium on a farmstead that is surrounded by hills, Bragger layers his bunkers with chopped alfalfa, rye, and millet. “It would be nice to have separate piles, but we just don’t have the space. The layering works well, especially if you can time out the rye and millet harvests with the alfalfa,” he explained.

The keys to successful alfalfa establishment have remained steadfast for decades: good seed-to-soil contact, proper planting depth, and a heaping portion of help from Mother Nature. In recent years, however, some of the traditional methods of how and when these get accomplished are being challenged by both farmer and researcher. Especially in these times of extreme weather events, having establishment options can’t help but be a good thing.

This article appeared in the November 2021 issue of Hay & Forage Grower on pages 14 and 15.