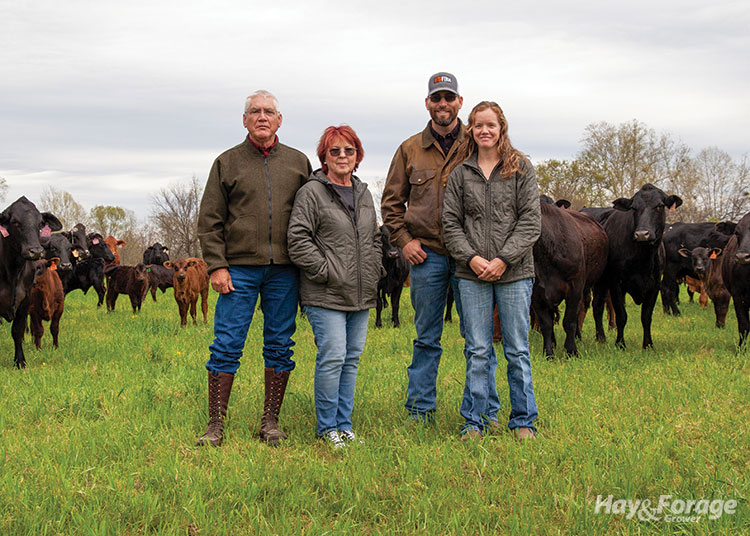 The Bailey family maintains a herd of about 300 Brangus-Angus cross brood cows. They wrap both their baleage and dry hay. From left to right: Bob, Deborah, Will, and Sydney Bailey.

Somewhere at the intersection of dry hay and chopped haylage you’ll find baleage, and that crossroads is getting more crowded with each passing year. Like many haymaking systems, it’s hard to cut corners with baleage and realize its full potential. For those willing to make the system work as it should, baleage can totally change a beef operation for the better.

Arkansas springs can be wet, while summers are always humid. Both situations can make it challenging to make dry hay; however, for the Bailey family in southwest Arkansas, it wasn’t too much moisture that drove them to baleage — but rather a lack of it.

“The droughts of 2011 and 2012 were a wakeup call for us,” lamented Will Bailey. “Those years hit us hard, and we knew that something had to change.”

That “something” turned out to be baleage. “Baleage gave us a way to drought-proof ourselves,” said Will’s father, Bob, who farms with his son.

The Baileys, including Bob’s wife, Deborah, and Will’s wife, Sydney, own and operate 900 acres of pasture and hay land near De Queen, Ark., just a short distance from the Oklahoma border. All four family members are actively engaged in farming activities, and they maintain a herd of about 300 Brangus-Angus cross brood cows. Calves are backgrounded for 60 to 100 days through the winter months. The farm also has 12 chicken houses, which provide a steady source of income and a ready source of poultry litter for their forage acres.

“Traditionally, people didn’t cut hay around here until Memorial Day,” Bob said. “We started planting the wheat and crimson clover for an early crop that we could harvest as baleage and give us extra feed. The winter backgrounding program was a by-product of the system that we used as a means to keep the wheat from maturing too fast. It was a game-changer for us because we got the extra feed and realized more profit from the backgrounded calves that get sold in the spring at 800 to 850 pounds,” he explained.

The wheat-clover mix is seeded on a portion of the Baileys’ 160 acres of dedicated hayfields. These fields, along with their pastures, have a base sod of bermudagrass and crabgrass in about equal proportions. The crabgrass is allowed to go to seed late in the year to replenish the soil’s seed bank.

In the fall, wheat and crimson clover are no-till seeded on fields that will be used for backgrounding. The pastures get seeded with a mixture of tetraploid annual ryegrasses. “We drill 100 pounds of wheat and 10 pounds of crimson clover per acre,” Will said. “We’ve found it easier and quicker to just broadcast the ryegrass at a rate of 25 pounds per acre.”

During the winter, cows are supplemented with dry hay and ryegrass baleage. Once the ryegrass reaches grazing height, cows are rotated between pastures and dry lots. In the spring, cows and calves are rotated through the ryegrass pastures until it plays out around the beginning of June.

The Baileys make about 600 bales of baleage and 600 to 700 bales of dry hay per year. “Even the majority of the dry bales get wrapped,” Will noted. “This avoids the dry matter loss from just storing them outside, and we don’t have to worry about a loss of protein that comes with excessive heating.”

Baleage is made from the farm’s wheat-clover acres plus any excess ryegrass or crabgrass. Dry hay is harvested from the dedicated bermudagrass-crabgrass hayfields. This hay is generally baled between 18% and 24% moisture and then wrapped.

The Baileys don’t cut corners, using eight wraps of plastic with their in-line wrapper on both baleage and dry hay. “We want to ensure oxygen exclusion, and we like to wrap bales immediately,” Will said. “There have been times when we saw the sun go down while we were wrapping and then were still out there to see it come back up.”

Baleage is harvested in the range of 40% to 60% moisture. “Sometimes with ryegrass, we’ll push it to 65% because the sugar content is high, and it ferments pretty easily,” Will noted. “The wheat and clover are less forgiving.”

No baling begins until a sample is put in a microwave to check its moisture. Deborah records the moistures and keeps track what fields the hay is harvested from. Once wrapped, Sydney acts as the quality control specialist for maintaining plastic integrity during the year. She inspects bales regularly, and any holes are quickly patched. She also will apply glyphosate around the bale lines to keep weeds at bay and discourage wildlife damage.

The Baileys’ fields are soil tested and fertilized accordingly. “Most of the hayfields only need nitrogen,” Will explained. “We apply 2 tons per acre of chicken litter to every acre in the spring. Then, after each cutting, commercial nitrogen is applied.” Up to six cuttings per year are harvested.

The harvesting is done with two John Deere 10-foot mower-conditioners, and swaths are laid out as wide as possible. The forage is then tedded once, raked, and baled with a McHale V660 round baler.

“Baleage is definitely one of the best things we’ve ever done,” Will exclaimed. “Its high quality has basically cut out the need for supplemental feeds. I attempt to talk people into trying it all the time.” 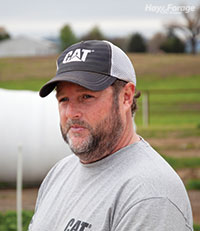 “I eat and breathe to make hay,” said Nick Taylor of Havana, Ark. “Baleage allows us to get some good feed up with some fairly short windows between rains.”
About 130 miles northeast of the Bailey operation lies the small burg of Havana, Ark. It’s here that Nick Taylor and his wife, Jamie, also sing the praises of baleage on their cattle and chicken operation.

Nick, who didn’t come from a farming background, became a plumber after graduating from high school and ran a successful business. It was Jamie’s family who farmed, and she worked for the land conservation district while maintaining a few chicken houses at the home farm. With the eventual opportunity to farm full time, Nick and Jamie started on 80 acres of her family’s operation.

These days, the Taylors have 700 owned acres spread across multiple farms within a five-mile radius. Their cattle operation consists of 250 to 275 brood cows and a herd of bulls.

“I didn’t come into farming with any preconceived notions, so we haven’t always done things the same as other people,” Nick said. “I’m also not afraid to try something new or different.”

“We learn a lot from life,” Jamie added.

Like the Baileys, the Taylors love their baleage. “That’s my baby,” Nick asserted. “I eat and breathe to make hay. Baleage allows us to get good feed put up with some fairly short windows between rains.”

Ryegrass is typically seeded in the fall, but some mid-winter seeding has been done when weather conditions allow. Marshall is Nick’s preferred variety, but Winterhawk has also been used successfully.

He will often apply glyphosate in early fall before no-till seeding the ryegrass. This helps with competition and weed control. “I have an old Haybuster no-till drill,” Nick noted. “It might have been number one off the assembly line. I traded some chicken litter for it,” he chuckled.

The Taylors have crabgrass as their summer-annual base grass, although they also have some permanent pastures that are predominantly tall fescue. Nick gets two cuttings of ryegrass, and by the third cutting, stands are usually half crabgrass. Then, crabgrass takes over for the remainder of the summer.

It’s all about the cattle

The Taylors begin calving their cows in late January and wean in September through October. They also purchase high-risk stockers at that time. Both their backgrounded calves and stockers are supplemented with baleage and commodities, then sold around the first of the year. “Our cows don’t start getting baleage until sometime in December,” Jamie explained.

Hay is cut with a Kuhn 10-foot mower-conditioner, and then tedded and baled with a John Deere 460M round baler. The Taylors make about 1,500 baleage bales and 300 dry bales per year.

“We sometimes bale the same day as cutting,” Nick said. “I like to target about 60% moisture but will bale drier. We forage test all of our baleage. I know what every row is. This year, our lowest protein test was 12% and total digestible nutrients (TDNs) are generally in the 60s,” he added.

Baleage is wrapped using a Tubeline in-line wrapper, applying 10 layers of plastic. “To be successful, you can’t skimp on wrap,” Nick advised. 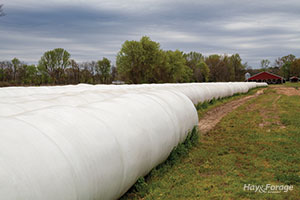 Baleage, pictured here on the Bailey farm, has been a game changer for both the Bailey and Taylor families. “Baleage gave us a way to drought-proof ourselves,” Will Bailey said. Nick Taylor noted that the lowest protein test from his ryegrass and crabgrass baleage was still 12%

Like the Baileys, the Taylors also wrap most of their dry hay to preserve quality and minimize dry matter losses. This past year, Nick grew a small field of corn to cut, bale, and wrap. After planting and applying chicken litter, he had a crop that was 6-feet tall and ready to cut in about 35 days. “It was tough to get dry, but the feeder calves loved that stuff,” he said.

Weather extremes of being too wet or too dry are more common these days than ever before. Such conditions can have a dramatic impact on how cattle are typically fed, managed, and marketed. Baleage, done right, may not be a cure for all weather ills, but it certainly can provide additional options and keep plans closer to normal than they otherwise would be. Just ask the Baileys and the Taylors.

Efficiency keys this harvesting business Next