Grinding their way to haymaking success 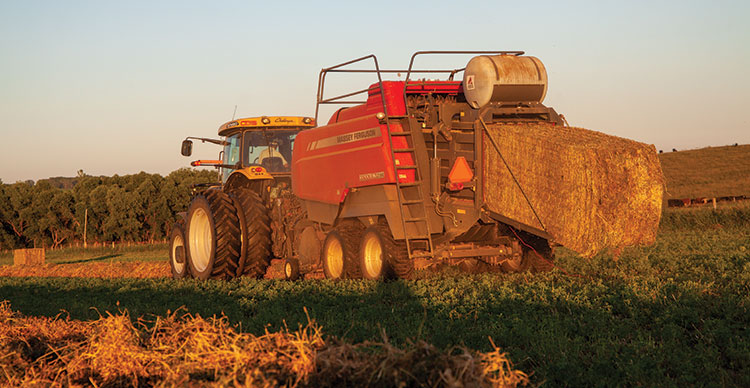 Miles Lacey often bales hay as the sun is setting and evening dew has developed.

Driving unabated in the eastbound lane across I-90 in South Dakota, I heard the familiar ringtone of my cellphone. The voice on the other end was Miles Lacey.

“If you can get here by 7 p.m., that hay should be about right for baling, and you can get some pictures,” he said. Luckily, traffic was sparse, and the speed limit through rural South Dakota is actually more of a suggestion than a hard cap.

Miles and his parents, Dick and Konny, along with his nephews, Tyler and Tanner Jacobson, keep the wheels turning, the plungers banging, and the hay grinding at Lacey Hay. It’s an operation that’s been on the map near Brandon, S.D., for nearly 60 years.

Lacey’s father, who is now 81 years old, purchased the farm and started with a stack mover in 1962. Five years later, he added a hay grinder and did custom grinding, mostly for feedlots. Hay grinding remains a major part of their business today. 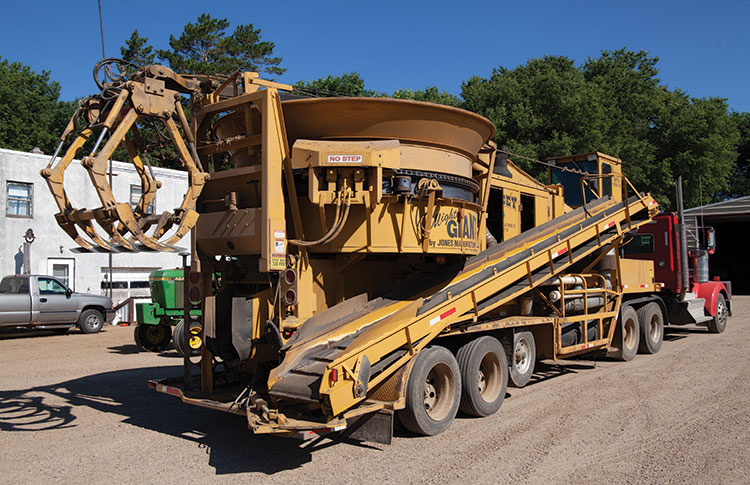 Lacey Hay has been grinding hay since the late 1960s. These days, they operate two trailer-mounted grinding units.

The father-son duo combines to farm about 700 acres at their Brandon location, just east of Sioux Falls and a near stone’s throw away from the Minnesota border. They also own and operate another 1,200-acre irrigated hay farm in north central South Dakota near Mound City that was purchased in 2006. Prior to that year, Lacey and his dad had farmed in the same area using share-rent agreements. Having the two farms spaced apart helps to eliminate some of the weather risk inherent with the haymaking business.

In any given year, Lacey Hay bales 1,200 to 1,300 acres of alfalfa between their two locations. They also grow corn, soybeans, and small grains as rotation crops and have a herd of 120 beef cows, which Tanner takes the lead in caring for.

While the dairy industry is disappearing in many states, such is not the situation in South Dakota. In 1962, when Lacey’s parents purchased the current farm, the state had 270,000 dairy cows. South Dakota hit rock bottom in 2004 with a tally of only 79,000 cows, and there didn’t seem much hope for stopping the decline of dairy bovines. However, with some aggressive marketing, the state began attracting operations from other U.S. regions to move to the Mount Rushmore State.

At the beginning of this year, South Dakota’s dairy herd totaled 141,000 head and has grown every year since 2004. Along with cows, dairy processing capacity has also expanded. The so-called I-29 dairy corridor has been a near and steady market for Lacey’s alfalfa hay.

“In recent years, making dry hay has been a real struggle in eastern South Dakota,” Lacey said. “It’s certainly more challenging than it was 20 years ago, and I find myself wishing for a drought most years. Some of the dairies that have moved in from other areas where dry hay was a normal feed ingredient have realized that haylage may be a more reliable way to go. As a result, we lost some of our market, but the recent rise in high-protein feed prices has been good for us from a hay demand standpoint,” he added.

In addition to dairies, Lacey also markets his hay to heifer growers and beef feedlots. His highest quality hay is sampled, tested, and stored in sheds. On the home farm, Lacey has enough indoor hay storage for about 3,500 tons. His grinding-quality hay is stacked outside and tarped. Lacey ships bales anywhere in the U.S. but only delivers using his own trucks within about a 200-mile radius.

Operating two farms that are separated by 300 miles means a lot of road time and the need for two lines of haymaking equipment. At the home farm in Brandon, that haymaking fleet includes a 16-foot AGCO Challenger self-propelled disc mower-conditioner, three twin-configured parallel-bar rakes, two AGCO 4x4 balers, and a Stinger bale stacker. 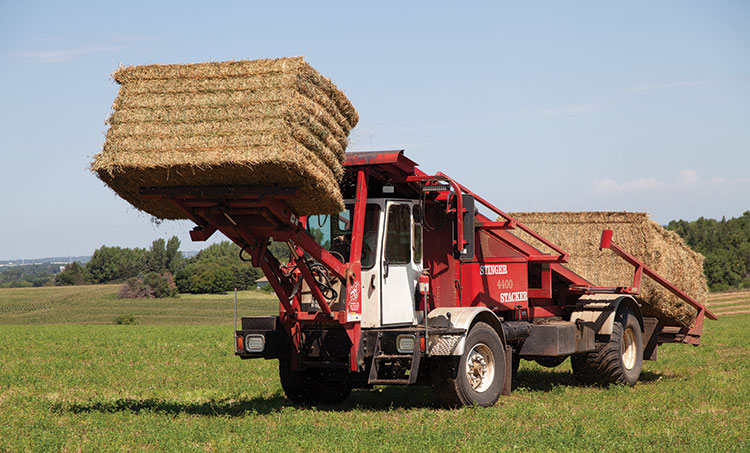 A Stinger bale stacker is used at each farm location.

Lacey said they take a similar approach to making hay as for what is done in the more arid West. They try to let the wilting crop get as dry as possible, and then they let the dew start to set in during the evening before they start baling. “We often deal with pretty short baling windows,” Lacey said.

It’s that short baling window that led Lacey to purchase a Stahli West DewPoint steamer this past winter. “It’s the first one to be sold in South Dakota,” Lacey said of the unit that is more commonly used in the arid West. “We’re hoping that we can start baling at two or three in the afternoon with the steamer, utilize that mid-day solar radiation, and then keep going through the evening.”

A change in approach

Lacey Hay seeds both conventional and Roundup Ready alfalfa varieties at a robust rate of 30 pounds of seed per acre, which includes the 33% seed coating. “My dad still likes the conventional varieties, and I prefer the flexibility of Roundup Ready varieties, so we plant both, depending on who owns the land,” Lacey said. In both cases, conventional tillage practices are used, and alfalfa is typically direct seeded in the spring, but that may change.

“We are trying to do more late-August seedings after a small grain harvest,” Lacey explained. “It seems like there have just been too many years where wet springs have really delayed us or have been the cause for lost new seedings.”

Lacey gets three to four cuttings per year, depending on the weather. Alfalfa fields annually produce 5.5 to 6 tons of bales per acre. All of Lacey’s fields are soil sampled on a grid and fertilized using variable rate application. Lacey also makes use of manure compost from an Iowa feedlot. Alfalfa is sprayed as needed for insects such as alfalfa weevils and potato leafhoppers, but the veteran alfalfa grower considers pea aphids to be one of his most troubling pest issues.

Life is a grind

In addition to making and marketing hay, Lacey, along with his father and nephews, continue to run year-round custom hay grinding business that his father started in the 1960s. They service surrounding dairies, feedlots, and beef farms, extending out to about a 100-mile radius with two trailer-mounted grinding units.

“It gets busy in the fall, and then busier in the winter, when at least one of the rigs is out on a job seven days a week,” Lacey said. “In addition to grinding clients’ hay, we grind a lot of bedding material and straw for feeding at the dairies. We also take orders for ground hay, which we grind here on the farm and then deliver with our live-bottom trailer. With the grinding business and our own cow herd, it gives us a good outlet for the hay we make that isn’t quite dairy quality.”

With a 60-year history and Dick and Miles Lacey not getting any younger, the future of Lacey Hay still looks bright with Tyler and Tanner now fully engaged in the operation. “We’re really fortunate my sister’s boys took an active interest in what we’re doing here,” Lacey said. “They both went to technical school to learn welding, so that’s been an added bonus!” 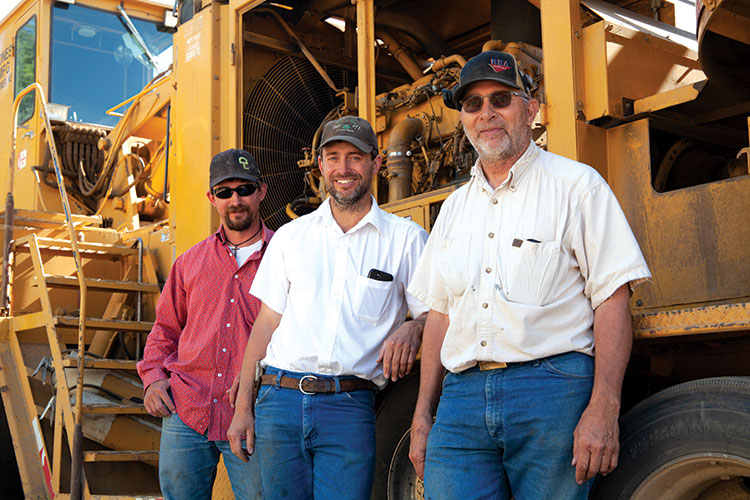 The Lacey Hay crew bales 1,200 to 1,300 acres of alfalfa each year. Left to right: Tanner and Tyler Jacobson and Miles Lacey. Not pictured is Miles’ father, Dick.

This article appeared in the April/May 2021 issue of Hay & Forage Grower on pages 6 to 8
Not a subscriber? Click to get the print magazine.

Cattle and crops are a perfect pair Next