Cattle and crops are a perfect pair

By Paige Smart
The author is a partner in a custom stocker cattle operation in eastern North Carolina. She holds a master’s degree in animal science from North Carolina State University. Steers at S & K Livestock Development enjoy rapeseed. The cattle tend to prefer brassicas to grasses late in the year.
S & K Livestock Development LLC is a custom cattle grazing business that was started by my brother, Ryan Kennedy, and I in 2018. Ryan had been using cover crops and minimum tillage practices on our eastern North Carolina family row crop farm for several years. At the same time, my interest and knowledge in cattle and grazing management was growing while I earned my master’s degree through the Amazing Grazing program at North Carolina State University.

My brother and I had talked for years about the potential of grazing cattle on the cover crops he grew during the winter between cropping seasons. In late 2017, I applied for and received a $7,000 AgPrime grant funded by the Tobacco Trust Fund to help get our grazing business started. Although our leap into the cattle business was not without hard lessons learned, mistakes, and “next times” during the first three years, we now can say that adding cattle to the operation has been a very successful, worthwhile venture.

Each year, we bring truckloads of stocker cattle to the farm starting in mid-October through early December. They graze a variety of cover crop species until mid-April, which is when the last load is shipped out so that row-crop planting can continue. The majority of the animals leave our farm in a finished condition, but a small percentage will return to their home farm for a little more time on grass.

On average, each group of cattle stays on the farm about 120 days. In an attempt to keep costs and risk low, we are contract grazing. We do not own these cattle and are paid based on average daily gain (ADG). The cattle are finished for an all-natural, pasture-based enterprise, which allows us to feed supplements for up to 1% of the animal’s body weight per day.

To date, our stockers have ranged anywhere from 1.8 to 2.8 pounds of ADG per group with an overall farm average of 2.5 pounds. We do not have access to high-quality stored feed, so we understock the farm to ensure we never have to exclusively feed hay. Currently, our stocking rate is two acres per head. In the 2019-2020 season, the farm was understocked; however, in 2020-2021, we are really pushing our limits. It’s no surprise that weather very dramatically impacts the success of our planned stocking rate.

One of the key profitability pieces for us is the length of time we are able to graze cattle. Having forage ready to graze from mid-October through mid-April is unique and only possible with a wide selection of cover crops. We rely heavily on spring oats, which are ready to graze between 30 to 45 days after planting. Oats allow us to graze from late October through December. They have a risk of winter killing in our area, so we always pair spring oats with more cold-tolerant grasses. 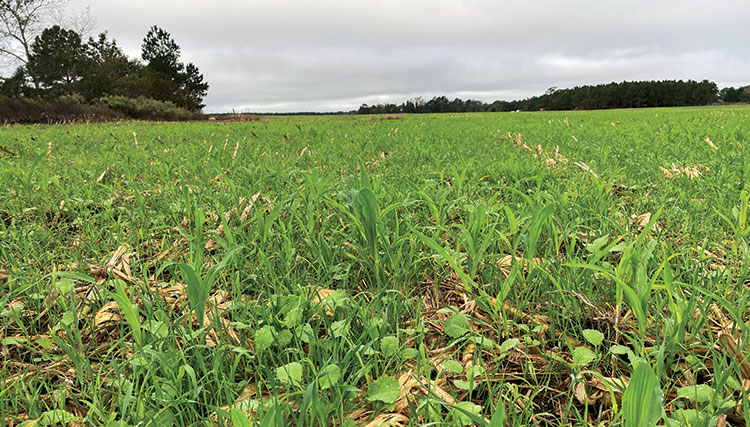 A mixture of spring oats, ryegrass, crimson clover, rapeseed, and volunteer corn about 20 days after planting.

From December on, we rely heavily on typical cereal grains like rye or triticale. We have also started including early maturing annual ryegrass, which has been excellent for high traffic and wet areas. Not a single one of these forages could support our system in its entirety — the diversity is critical for success. We have been using the following formula to help us determine the number of acres of each grass we need:

These are often paired together so that each pasture has two grasses as the base forage. We have adjusted this each year and are finally feeling more comfortable with this formula. As with anything related to forages, hitting an ideal ratio between species will always be a moving target. In addition to these grasses, we also include a brassica in most of our fields. The brassica we have had the most success with is rapeseed, which has only added $2 to $4 in cost per acre and is preferred by the cattle once they adapt to it.

We have experimented with annual legumes as well but have not been satisfied with our return on investment or their standability to grazing and traffic pressure. If we were trying to reduce nitrogen inputs for the row crops, then legumes might provide more value.

Our winter annuals are not always ready to graze by mid-October, so we have experimented with both stockpiled bermudagrass and late-planted summer annuals to cover that potential two-week lapse. I was initially satisfied with grazing stockpiled bermudagrass but have since had mixed results. Grazing late planted millet or corn has been successful, but irrigation was necessary to meet our timeline. Without irrigation, planting in September is too big of a gamble in our area.

Most of our acreage is planted using a fertilizer spreader to broadcast the seed followed by a pass with our Turbo-Till. In the future, we may invest in a no-till drill, but broadcasting currently works best for the number of acres we are covering with limited labor.

You might anticipate that we have nothing but sandy soils in eastern North Carolina; however, the majority of the acreage we are grazing is a “Carolina Bay” soil. This is a high organic matter, wet soil. With above average rainfall the past few years, we’ve seen significant forage losses to flooding. In the future, we are going to have to build a 15% to 20% loss of yield into our forage plan due to flooding. One year might be a fluke, but after three years, I think we can call these losses a trend.

Being a row-crop farm, most of our fields are not contiguous; this means we are often creating groups of cattle that stick to the same fields the whole time they are with us. From a forage perspective, we have to ensure that each group gets those ideal grass ratios. This also means we frequently walk cattle across roads during pasture moves, which would not be possible without having the cattle well trained to polywire.

Fertility and timing of fertility has been an ongoing learning curve. Most of the fertilizer comes to the farm in the form of commercial compost or poultry litter. We can fertilize in the fall for a huge fall growth spurt, but we really need those grasses to grow the most in January and February. Applying compost to boost growth for this period has given us the best results in terms of grazing days, but it’s very difficult to find a dry window of time in those months to run the application equipment. We are still learning how best to resolve this.

The stocker operation causes little impact on the timing of row crop planting or harvest. In the areas that we know will be grazed early in the season and need to be planted to forage quickly, we will use an earlier maturing soybean variety.

Corn is typically harvested in August, which doesn’t interfere with our forage planting in mid-September. After the cattle leave in the spring, the feeding areas, high-traffic areas, and wettest fields show serious pugging and at least perceived compaction from hoof action. While plant roots will ultimately help this issue, in the worst areas we run a deep tillage implement to mitigate any compaction. 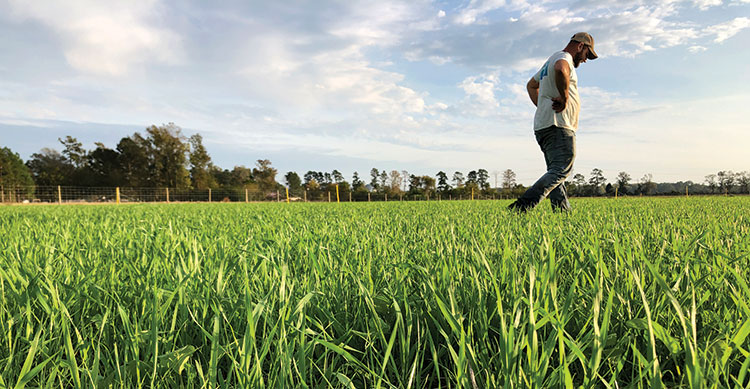 Ryan Kennedy walks across a mixture of spring oats and ryegrass about 10 days post-planting. The previous crop was soybean.

My brother and I both feel that adding a stocker enterprise to the farm is sustainable and a benefit from the standpoint of land stewardship. Just as important, there is profit to be made. We’ve learned a tremendous amount in our short time doing this, and we still have many more lessons on the horizon. Here are a few of the overarching lessons worth sharing to date:

Make it temporary. One of the greatest things about this stocker model is that we get to start new every year. The forages, every fence line, the water system, and even our working facility are all temporary and movable. This has been the biggest key to our success and provides us the opportunity to make dramatic improvements each year.

Our perimeter fencing is all two-strand polywire. We use fiberglass post corners with step-in posts every 20 feet. The interior fencing that is used for weekly rotations is single strand polywire. We have about 28 miles of polywire, six water troughs, and four fence chargers. Our waterers either pull from our irrigation wells or are solar powered and access water from the flowing ditches.

The working facility is also mobile, so we can unload, load, treat, or weigh anywhere on the farm. Using completely temporary systems also means that the row crops are not impaired by fences, water lines, and so forth. One of our biggest regrets are those few fences and water systems that we initially made permanent.

Be realistic. One of the biggest mistakes I made in our first season was overestimating the forage production capacity of our land. I planned for the “best-case scenario,” and, as a result, we fed more hay-based diets than we would have liked. To be profitable in this business, every bite that an animal takes needs to be as nutritious and balanced as possible. Plan for realistic or low yields and be pleasantly surprised if the best-case scenario plays out. Focus on forage timing, and do everything possible to have no gaps. Developing a realistic forage plan may take a few years, but don’t be discouraged. As long as you are learning, you’re progressing.

Be creative. When you start looking at everything as an opportunity, you’ll realize how much you can do with cattle that are well-trained to polywire. Before we owned enough polywire to fence out every pasture, we would contain the cattle in a 40-foot by 40-foot polywire square, reel up the current pasture’s polywire on a garden hose reel, unreel it on the next pasture, and then finally move them from their box to their new pasture. It would take us about four hours to accomplish this, but it often kept us from feeding hay. I never would have considered doing this or moving cattle across the road using polywire, but my brother does a great job of challenging me to think outside of the box.

I’ve often encountered farmers who have “hayfields” right next to “pastures.” I wonder how much less hay these same farmers would need if they were more flexible with their plans, put up some polywire, and grazed that hayfield when they were in need. Have a plan in place, but don’t be afraid to be flexible and change the plan at the last minute.

So much is possible with good planning, good forages, and very hot polywire. I encourage you to think outside of the box and look for opportunities that are there for the taking.

This article appeared in the March 2021 issue of Hay & Forage Grower on pages 6 to 8.

A good case of hay fever Next