A good case of hay fever 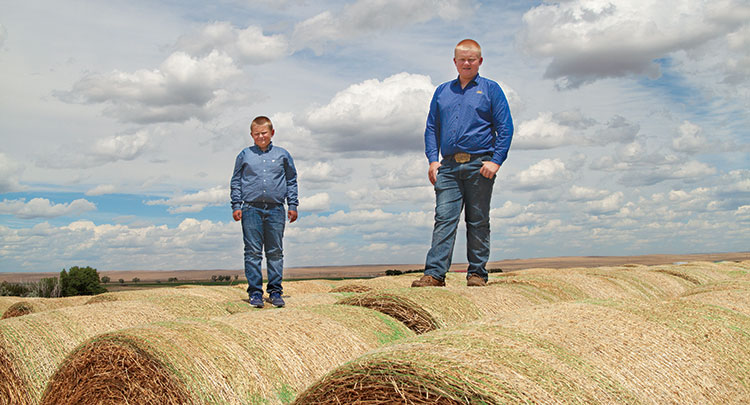 Nicholas Gutierrez made his appearance in the forage world as a teenager competing in the World Forage Analysis Forage Superbowl at World Dairy Expo in Madison, Wis. The Wyomingite’s 2019 Forage Superbowl entry not only placed high, as it usually does, but it won the Commercial Hay division.

When entered under a 17-year old’s name, questions sometimes arise as to who is actually doing the work to make the hay. But if you ever have the opportunity to chat with Nicholas about his family’s hay farm, you will soon learn that he is just as involved as his parents, Jason and Elizabeth, and he has been for a while.

Nicholas’ first farming experience happened when he was 3 years old. Instead of picking up toys like his mother asked, Nicholas escaped the confines of his room and managed to make his way into the field behind his house to join his father in the tractor. After the initial panic settled, Elizabeth and Jason concluded that their son needed his tractor time.

“In seventh grade, I was recruited to our FFA chapter by one of my friends,” Nicholas shared. “I really enjoyed spending time with the members and participating in our service projects.” During the 2020 to 2021 school year, Nicholas will serve his chapter as a second-year officer before graduating in the spring.

Involvement in his school’s chapter of the National FFA organization (FFA) throttled Nicholas into the agronomic and business side of haymaking. During his freshman year, he completed one of many research projects for his supervised agricultural experience (SAE).

Win some, lose some

Many hay farmers claim that you will pay for a hay barn whether you build one or not, and Nicholas is one of many that has the research to prove it. His SAE won at the Wyoming FFA state convention and went on to place at the national level.

His research documented the importance of covering hay to preserve quality and monetary value. “It was an easy argument to make,” Nicholas stated. “When you compared the stored bales to the weathered ones, you can see the damage and loss, which impacted how much it was worth.”

FFA doesn’t currently have a contest division dedicated to hay, so Nicholas competes against many other more specialized SAEs. This doesn’t stop him from making a name for himself or his work.

“Some of my judges are dairymen or haymakers from other parts of the country, and they can relate to my forage projects,” Nicholas explained. His recent SAE on correcting the pH of alkaline soils on his farm earned him another trip to the National FFA convention.

Jason described how difficult it is for Nicholas to balance work and school. “It’s hard anytime you miss school to keep up with the work,” he said. “But when you’re missing a week at a time, it’s almost impossible.

“Nicholas was committed to going to National FFA convention in 2019, which meant he couldn’t go to World Dairy Expo, too,” Jason explained. “Sure enough, that’s the year his entry won.”

Jason and Elizabeth met at the University of Wyoming, and neither have backgrounds with production farming. Before college and marrying Jason, Elizabeth lived on her parents’ small farm where she cared for her horses that moved with her from Minnesota to Wyoming.

If Jason was going to marry Elizabeth, who also works as a pharmacist, he knew that keeping horses was non-negotiable. Jason decided then that he would grow the hay to feed them. “It seemed silly to buy the hay when we could come here, buy a farm, and raise our own,” he explained.

So, the young couple bought 80 acres outside of Casper, Wyo., and began their hay business. There was an existing hayfield, but other than that it was a bare piece of land.

“We added all the structures,” Elizabeth said. “It didn’t even have utilities when we bought the place.” Now, several buildings, fences, irrigation systems, and a house are on the original 80 acres.

The previous owners were both full-time engineers but maintained the producing hayfield. Jason recalled the advice they shared: “Get the Idaho Forage Handbook and start reading.”

“We didn’t have anyone to consult with when we first started, so we read the research and trusted the science,” Elizabeth remarked. “It’s worked for us so far. We consider our performance, look at the science, and then make decisions based on that.”

Intense management and ideal conditions are not the only factors playing into the Supreme quality hay produced at Rooster Ranch.

In addition to Nicholas’ work to correct soil pH, the family makes decisions about seed varieties, fertilizer, weed and pest management, and marketing.

“It takes the same amount of time and money to prepare the land for an alfalfa stand planted to cheap seed or a proven, new variety,” Jason explained.

In recent years, they have selected alfalfa seed with HarvXtra and Roundup Ready genetics. The Roundup Ready trait allows them to manage weeds in a cost-effective way. “Anything will compete with and possibly overtake alfalfa,” Jason remarked. “Being able to spray Roundup and take the weeds out helps us produce cleaner alfalfa hay.”

As a member of the Weed and Pest Board in his county, Jason also believes that addressing grasshoppers before they are a real issue helps improve the bottom line. “Some years there’s noticeable damage three windrows into the field,” he asserted. During the past growing season, they treated hayfields for grasshoppers three times.

As for fertilizer, the family has experimented with liquid applications in the spring but were not impressed with the results, which is why they prefer to use granular in the fall. The winter moisture draws the nutrients into the soil, and they are available to plants from the beginning of the growing season. 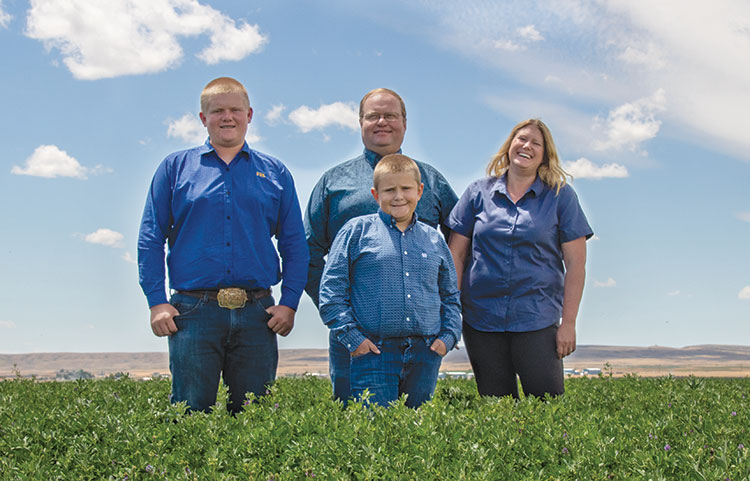 The Gutierrez family: Nicholas, William (in front), Jason, and Elizabeth.

Although Jason and Elizabeth bought the hay farm in 2004 to provide for the horses, it has grown into much more.

They began producing more hay than her horses could eat in a year, so the surplus became a cash crop for the couple. “Someone baled for us the first couple of years and kept a percentage of the hay,” Jason explained. “Even then we had more than enough to compete in the hay market.”

For a while, the family made deliveries to local farms. They would bundle together orders of 175 to 200 small square bales on a trailer, drive to the destination, and unload the bales.

Baling everything in small squares at first, Rooster Ranch fit into the horse hay market nicely. “We have high-quality hay here,” Jason shared.

“Warm days and cool nights are great for alfalfa,” he continued. “If you can get enough water on it, you can make excellent hay.” Winning multiple highly competitive hay contests only supports his statement.

These days, Jason maximizes the marketability of first cutting by making round bales. “It’s sometimes a little bit lower in quality, but we have several beef producers in the area,” he said. “They don’t need the Supreme quality, don’t want to pay the premium for it, and don’t want to hassle with small squares. Using round bales eliminates a lot of those issues.”

The Supreme quality hay that comes with later cuttings is mostly baled in small squares as horse hay.

The Rooster Ranch operation has grown considerably in terms of acres over the last 16 years. Their hayfields total 180 acres of pure alfalfa and 120 acres of mixed grass. Additionally, the family leases standing hay from neighboring farms each year.

Jason and Elizabeth also manage a 65-cow beef herd, which Nicholas and his younger brother, William, help with.

Even though the family has a consistent demand for hay, some bales just don’t meet the mark. “Our cattle absorb that loss,” Jason mentioned. “Beef cows do not need Supreme quality hay year-round.” In the off chance that hay gets rained on between cutting and baling, those bales are directed to their own herd.

“The cattle are not my favorite part of the farm,” Nicholas admits, but he said they complement hay farming extremely well. “You can’t hay all year, and cattle don’t need your full, undivided attention during hay season.”

A future in farming

Hay farming has always been an important part of Nicholas’ life, and although he doesn’t plan to be a full-time farmer in the future, he can’t imagine a day that it won’t be a substantial part of his adult life.

After graduating high school, he plans to go to community college before attending the University of Wyoming to pursue a degree in engineering. As of now, he is leaning toward civil engineering and would like to earn a lineman certification as well. Nicholas takes pride in being able to work with his hands and experience the fruits of his labor.

“Come springtime, you start to get an itch,” Nicholas laughed. “The only way to satisfy it is tractor time in a hayfield.”

Grazing benefits run deep on this Ohio farm Next

Cattle and crops are a perfect pair Previous