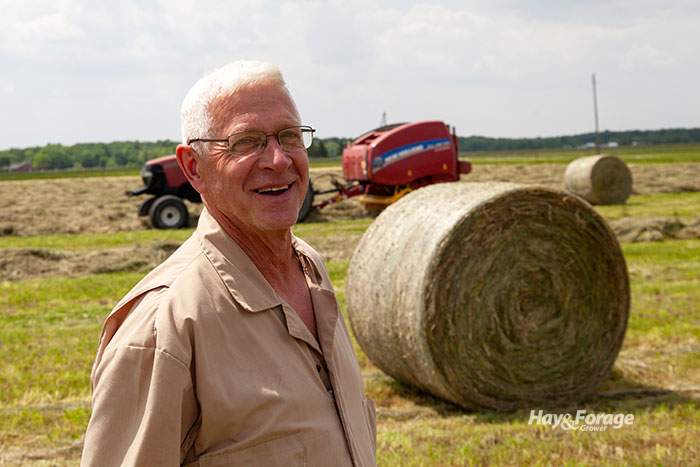 Ralph Schlatter has been caring for livestock since he was young. When his father passed away in 1969, he and his older brothers became the fifth generation to own their family’s farm in Defiance, Ohio. Schlatter has added many enterprises to the operation over the years, and his focus on regenerative agricultural practices not only benefits his animals, but it also improves his land.

Today, Schlatter owns and rents approximately 650 acres, most of which is used to graze his dairy, beef, sheep, chickens, and turkeys. He and his wife, Sheila, own Canal Junction Farm and its on-site retail store where they sell meat, milk, eggs, and cheese, which is made on the farm. The Schlatters have found success in direct marketing because of the recent consumer demand for 100% grass-fed products.

When Schlatter took over the farm, his family had been custom raising up to 6,500 layers and earning 10 cents per dozen for eggs. He wasn’t interested in this business model and wanted a different source of income, so he decided to start his own commercial flock of broilers. Schlatter realized buying his own animals and feed offered a new set of challenges, so after a few years, he shifted gears again.

Schlatter converted the 72 acres of row-crop land he and Sheila were living on to grass and started raising his chickens on pasture. He then turned one of the buildings the birds previously occupied into a tie stall barn for 64 registered Holsteins. Eventually, he transitioned the rest of his farmland to pasture and began grazing his cattle, too.

Having grass-fed products was a big advantage for selling direct-to-consumer. As business took off, the dairy barn was upgraded to a swing parlor and Schlatter aspired to grow the herd. However, instead of purchasing more dairy cattle, Schlatter unintentionally brought home beef.

“We bought some heifers that were supposed to be Holstein-Jersey crosses, but I can still remember thinking they had an Angus nose on them,” Schlatter said. “Their calves were all black and curly-haired, and at this point were 3/4 Angus. Looking back, we could have just sold the calves, but we kept the heifers and started a beef herd.” 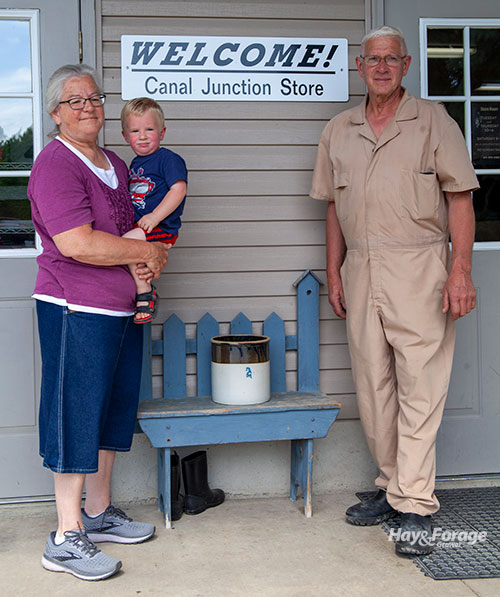 Sheila (holding her grandson) and Ralph welcome customers to their on-site retail store.

Despite the mix up, Schlatter made it work. The farm now has nearly 120 Normandy dairy cows and about 35 crossbred beef cattle, which are managed by his son, Kyle. Schlatter also raises approximately 5,000 broilers each year and has introduced lambs, layers, and turkeys to the farm. Schlatter receives additional help from Steven Machamer, a young farmer in the Wisconsin Dairy Grazing Apprenticeship program.

When Schlatter began rotationally grazing in 1994, he experimented with many different forages. He planted Kentucky bluegrass, orchardgrass, reed canarygrass, and different kinds of ryegrass and bromegrasses. He eventually found Kentucky bluegrass was the most resilient to compaction from grazing and the high clay content of his soil.

“We have very heavy clay – about 85% – and ryegrasses can’t take a lot of that,” Schlatter noted. “I know one field has some reed canarygrass, and there is also a little bit of orchardgrass here and there, but it doesn’t seem to be able to handle the traffic and gets beat down.”

White clover can also withstand these field conditions and is a key component to Schlatter’s pastures. He said this legume reseeds itself within 30 days, which aligns perfectly with his livestock’s rotation. Schlatter has tried to incorporate birdsfoot trefoil, but realized it didn’t reappear as quickly as he’d hoped.

“If we are trying to do a 30-day rotation, the cattle are always eating the birdsfoot trefoil down before it can bloom to reseed itself,” Schlatter said. “It’s a good feed, but we’ve kind of seen it disappear.”

Schlatter uses six-wire high-tensile wire on treated posts for fencing. His dairy cattle are moved to a new paddock twice a day – after each milking – and his beef cattle are moved once. Not all of his land is used in rotation, though, as 20 to 40 acres are set aside to make hay for winter feed. 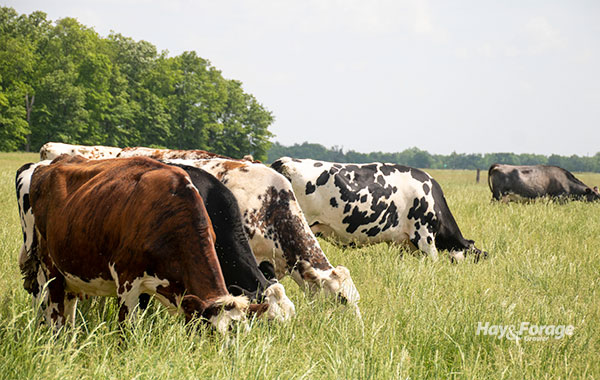 Normandy dairy cows at Canal Junction Farm are rotated to a different paddock twice a day, after each milking.

When Schlatter shifted to grazing, he was able to get rid of a lot of machinery. He sold his combine and tillage equipment, eliminating the cost of maintenance that came with it. However, Schlatter is less concerned with the economic returns of grazing livestock than the environmental ones.

Schlatter acknowledged some people’s concern of carbon emissions from cattle and explained what he believes to be the solution. “We can’t get rid of the cows, but we can get them back on the pasture,” he said.

Ever since taking his own advice, Schlatter has conducted soil tests and uses the data to justify his point of view. The organic matter of Schlatter’s soil has risen from 3.4% in 1979 to 5.4% in 2017. How does organic matter relate to carbon?

Schlatter explained that the soil’s ability to sequester carbon from the atmosphere intensifies when it accumulates higher amounts of organic matter. After implementing a pasture-based system and planting forages, Schlatter’s soil has done just that.

In addition to carbon sequestration, high levels of organic matter also improve the soil’s water holding capacity. This is another advantage of grazing Schlatter recognized in his fields during a heavy rainfall event years prior, further inspiring his passion for grazing.

“It was a Friday afternoon when it started to rain, and it rained through Monday morning,” Schlatter recalled. “After a couple of inches had fallen, there was already muddy water coming off neighboring conventional fields. We did not have water running off until after about 6.5 inches of rain, and that’s been a great incentive to us.”

Dewing it the small way Next