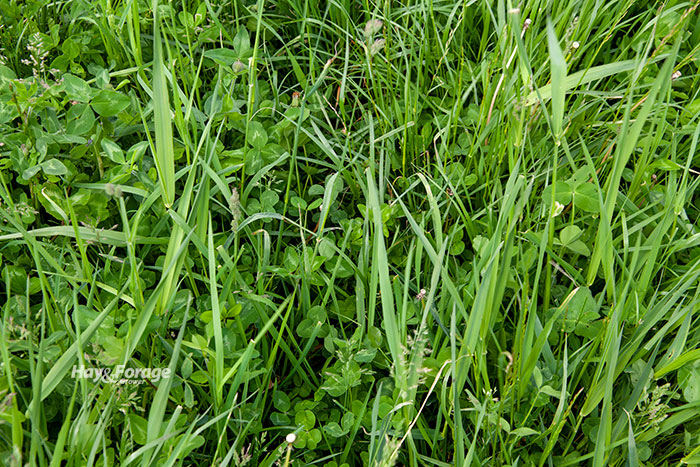 Whether we’re discussing people or forages, diversity is a present-day buzzword that permeates both the written and spoken word. Leaving humans aside, let’s turn our focus to mixed forage stands for hay or pasture.

A mixed forage stand of grasses and legumes offers many benefits, but also complicates management. For this reason, it’s not difficult to find forage producers who still like to roll with monocultures.

“Having a mixed hay or pasture stand that includes legumes such as white or red clover or alfalfa can reduce the nitrogen needs for the field,” notes Haley Zynda in a recent Ohio State University Extension Beef Cattle Letter. “If the field is comprised of at least 25% legume, then the nitrogen fixing capability of the legume should be able to handle the nitrogen needs of the rest of entire stand. In a world where nitrogen costs $1 per pound, legumes are coming to the rescue,” adds the Wayne County extension educator.

In further documenting the advantages of a mixed stand, Zynda writes that mixed stands will also have more longevity than either a pure stand of grass or legume. For example, a pure stand of alfalfa or orchardgrass will only have a lifespan of about four to five years.

Citing research from North Dakota State University at their Central Grasslands Research Extension Center, Zynda reports that a 50-50 mix of alfalfa and meadow bromegrass was planted in 1988 and was still productive as of October 2021. The plot still produces at least two cuttings per year.

Zynda explains that another benefit of a mixed stand is the reduced bloat risk for cattle. A 50-50 grass-legume mix has a lower chance of bloat than a high percentage legume stand. Cattle tend to select grasses before clover, so diluting the rumen contents with grass prior to legume ingestion can lower the risk of bloat.

“Perhaps the number one reason why producers choose to plant mixed stands is the increased feed quality that legumes provide, Zynda asserts. “Grass pasture can provide about 16% to 20% crude protein, but alfalfa and other legumes can offer upward of 20%. This can lead to enhanced animal performance on fresh forages alone and can also reduce the need to purchase protein supplements,” she adds.

Perhaps the most often cited reason for growing only pure stands of grass or legumes is weed control. Most herbicides labeled for forage crops will kill either broadleaves or grasses but not selectively take out only weeds in a mixed stand.

Zynda writes that a new herbicide, currently in the process of receiving Environmental Protection Agency (EPA) approval, may be helpful for weed control in some mixed stands. ProClova, marketed by Corteva Agriscience, is touted as being a broadleaf herbicide that will be safe for white clover and annual lespedeza. Further, there will not be any post-application grazing restrictions for the product.

Additional details on ProCova can be found here.

Alfalfa seedlings hang tough in the cold Next

Be ready to move on cereal forage harvest Previous