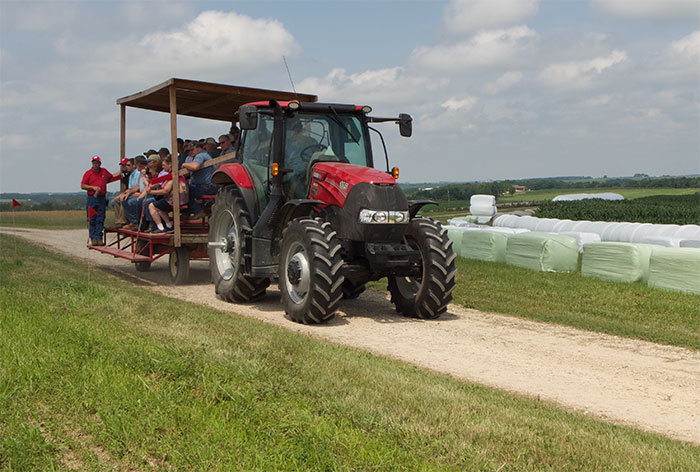 Shortly after it was established in 1963, the University of Wisconsin–Madison’s Lancaster Agricultural Research Station embarked on a study of crop rotation, to serve the small farms on the steep hillsides where the Driftless Area slopes down toward the Mississippi River.

Plenty has changed since then, including the size of the farms and the focus of the study, but the goal is still to bridge the divide between cutting-edge research at the UW–Madison College of Agricultural and Life Sciences and the practical realities of survival and prosperity on the farm.

The 50-year history of the project mirrors changes on Wisconsin farms over the past half century, says station

Superintendent Arin Crooks. “Originally, the goal was to see if we could replace alfalfa in rotation with corn by artificial nitrogen fertilizer, but the oil crisis in the ’70s sent the price of fertilizer sky high. So we began looking to a more sustainable crop rotation,” alternating corn and legumes, which move nitrogen from the atmosphere to the roots. 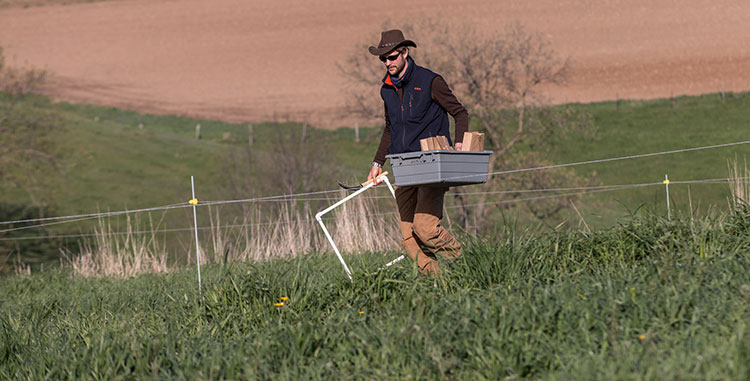 Jérémie Favre, agronomy graduate student for assistant professor Valentin Picasso Risso, in a research plot at the Lancaster Research Station. Kernza is a perennial forage and grain crop that can be grazed in the spring and fall, and harvested for grain in summer. Photo by Sevie Kenyon, UW-Madison CALS

The station is a 530-acre site west of Lancaster with seven full-time and three part-time employees, and three or four students from UW–Madison as well as other institutions such as UW-Platteville and Southwest Wisconsin Technical College. As one of the 12 CALS ag research stations, the site serves UW–Madison agricultural researchers who are testing, improving and adapting seeds and techniques to meet the needs of Wisconsin farmers.

“We talk about the rotation study as an evolving, living research project,” says Crooks. “For example, 10 or 15 years ago, producers around here started going back to planting winter wheat as a cash grain crop, so we began to test how that would play into productivity.”

More recently, the Lancaster station has embarked on a detailed study of a natural Driftless Area issue: how to shift the cost-benefit equation while grazing cattle in woodlands. Cattle appreciate summer shade, so in the pastures when the heat index goes critical. The hope is that regulating pasture usage will reduce harm to trees and benefit the cattle at the same time. 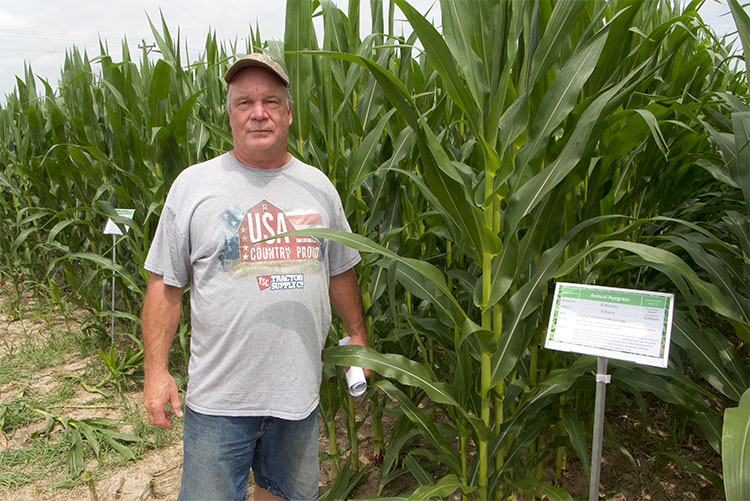 Sam Schwer, who farms near Fennimore, at a test plot showing the cost and benefit of various cover crops, at the Lancaster station. David Tenenbaum, University Communications

On July 19, at one of the station’s annual field days, Sam Schwer, who works 500 acres and raises beef cattle just north of Lancaster near Fennimore, was examining corn plots on fields following various cover crops planted last fall. Having the station do this on-the-ground research is a “strong decision-maker,” says Schwer, who is president of the Grant County Cattlemen’s Association. “Input costs are rising more and more, and if it works, that’s good — and if it doesn’t, I don’t have to put the money out to test it myself.” 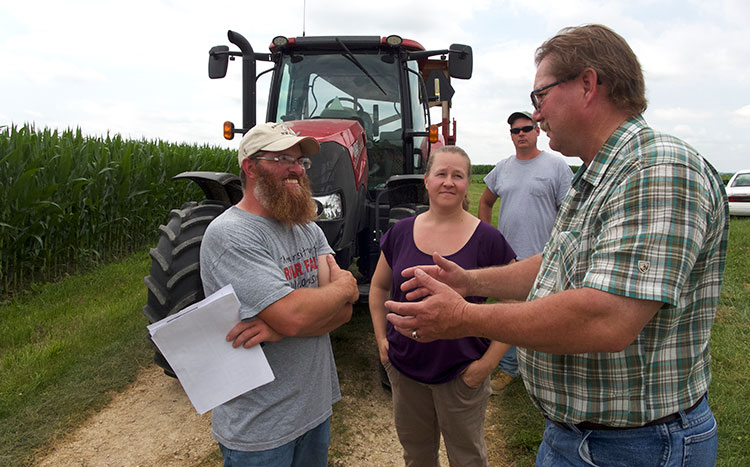 Nearby, Matt and Beth Mueller were discussing a perennial relative of wheat called Kernza that can be grazed and cut for forage, and so may reduce their need for stored feed. The couple farms 1,100 acres in Rewey, east of Lancaster, where they also raise 400 cows and their calves. Matt Mueller says they plan to test Kernza on part of a 30- to 40-acre area where the soil is too thin and rocky to be tilled. Visiting the station “gives us ideas to talk about, things to look into,” says Matt. “We’ll come back here in the fall to see how well the cover crop is established.”

“Kernza is new to us, and we hadn’t heard much about it,” says Beth. “It’s good to be able to come here and see it growing, talk to people who have researched it, who can answer our questions.”

The 350-acre Gerry Weiss farm a few miles from the Lancaster Agricultural Research Station shows the benefit of practical, tested agricultural advice. When Weiss bought the farm in 1975, it was riven by gullies; annual erosion measured more than 13 tons per acre.

As he began raising crops, cattle and swine, stanching erosion was the first order of business.

Weiss, who has a bachelor’s degree in meat and animal science from UW–Madison and a doctorate from Iowa State University, knew nothing about farming the steep hillsides of the Driftless Region, so he sought advice from the Lancaster station, the rest of the College of Agricultural and Life Sciences in Madison, and the U.S. Department of Agriculture Natural Resources Conservation Service. 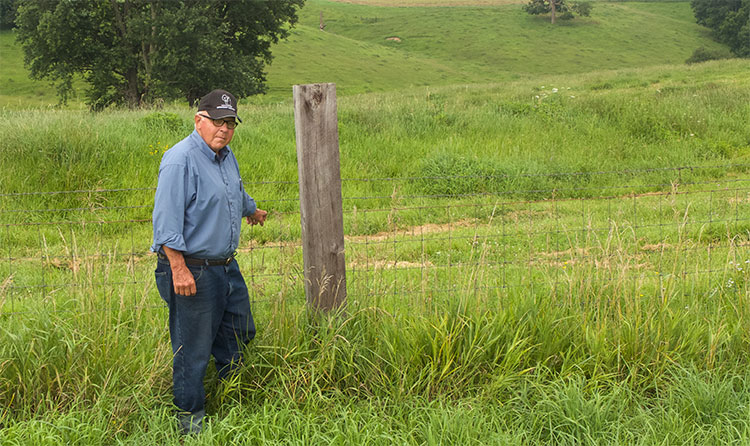 Gerry Weiss has spent a lifetime repairing 350 acres near Lancaster. Now he’s looking for a next generation conservation-minded farmer who appreciates the enormous amount of thought and intelligence that’s converted his farm from a poster-child of soil erosion into a textbook example of how to farm the hilly, Driftless Region profitably, sensibly and without waste. Grow forage, he says! David Tenenbaum, University Communications

After constructing miles of terraces and bulldozing and filling gullies, soil erosion plummeted to 0.1 tons per acre. Even after the heavy rains of mid-July of this year, bare soil is not visible.

That’s partly due to the intensive battle against erosion. And with grain prices low, the farm is devoted to forage crops and conservation reserves.

Much of that forage comes from permaculture — plantings that grow year after year from one seeding. “In 38 years following the initial seeding, I have never reseeded 75 acres of waterways and pastures,” Weiss says. “We fertilize and lime, but these are permanent stands. We just harvest hay off of them via grazing and mechanical harvesting.”

As Weiss drives his pickup across waterways where gullies once could have hidden a bulldozer, he returns to one name: William “Bill” Paulson, a Ph.D. agronomist who was director of the Lancaster Research Station from 1963 to 1991.

Paulson had an uncanny knowledge of pasture seeds, Weiss says. “USDA had its own seeding specifications for these soil-conservation activities, but the difference is that Bill had actually done it here at the Lancaster Research Station. As we built and seeded the waterways, he had the perfect seed mixture recommendations. It was unbelievably positive. He knew what would work here.”The Lancaster station is studying the effects of grazing cows in woodlands, aiming to develop guidelines to protect trees, shade cows and reduce the environmental impact of farming. 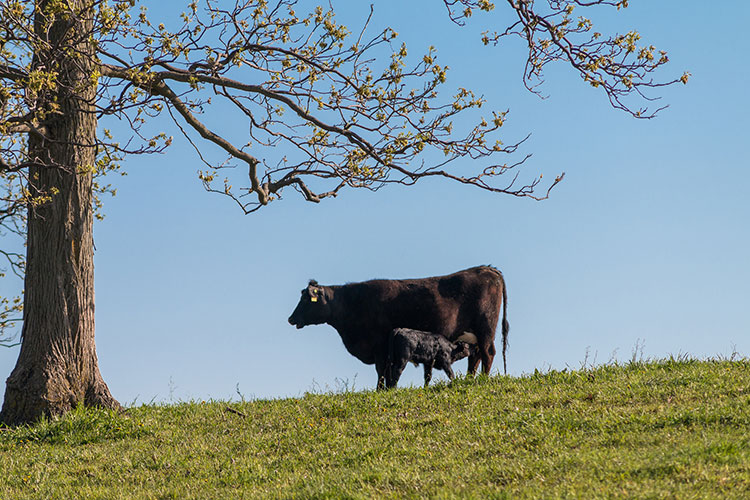 The Lancaster station is studying the effects of grazing cows in woodlands, aiming to develop guidelines to protect trees, shade cows and reduce the environmental impact of farming. Sevie Kenyon, UW-Madison CALS

Case IH Launches Next Generation of Maxxum® Series Tractors Next

AGCO to Acquire Precision Planting from The Climate Corporation Previous