Alfalfa heaving: A potential concern for this year’s alfalfa crop

Alfalfa stands across the Midwest are sometimes damaged during the winter and early spring. Winter injuries are most commonly the result of extremely low or fluctuating temperatures, persistent ice sheeting and lack of snow cover. These environmental conditions can lead to decreased crop quality and yield losses via exposure to disease and plant death.

During my on-farm visits with dairy producers this spring, I have witnessed a significant increase in the number of alfalfa fields affected by alfalfa heaving. Alfalfa heaving is a condition defined by alfalfa crowns and roots being forced above the surface of the soil as a result of freezing and thawing. Heaving occurs more commonly in heavy soils that feature a high moisture content. Repeated freezing and thawing causes soil expansion and contraction, which pushes the taprooted plants out of the soil in late winter and/or early spring. Older alfalfa stands are especially prone to heaving, due to their more developed taproot, compared to grasses or first-year alfalfa stands, which have more fibrous root systems. 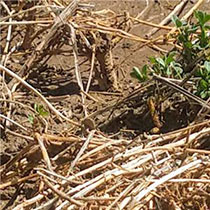 Heaved alfalfa plants can be damaged in four ways:

Evaluate your alfalfa stand when two to four inches of growth become available, in order to count the number of stems per square foot. Assuming heaving damage is minimal, an alfalfa stand needs at least 40 stems per square foot to be economically viable and, ideally, 55 or more stems per square foot to ensure maximum yield potential. After the initial observation of your alfalfa field, dig up a few plants to determine if the taproot is broken. Alfalfa plants with broken taproots will likely green up initially but die when temperatures rise and the soil dries out. The length of time before the plant dies will typically depend on the length of taproot above the break, and the plant’s lifespan can vary widely, from only reaching green-up (broken three to four inches below soil surface) to sufficient growth for the first crop (taproot broken six to eight inches below the soil surface) to growth until the first dry spell (taproot broken eight to 12 inches below the soil surface).

Severe heaving: Fields with more than 1.5 inches of heaving (as measured from the soil surface to the top of the crown) will likely have broken taproots and can also suffer significant damage from harvesting equipment. These fields will most likely need to be terminated immediately and transitioned into another crop species for the upcoming growing season, since over-seeding alfalfa in an existing alfalfa stand is not an option, due to the potential for autotoxicity death in new alfalfa seedlings.

Moderate heaving: Fields with one inch of heaving or less are likely to have unbroken taproots and may be salvageable for at least the current year. These fields may have a delayed green-up and might require both a more delayed harvest than normal (i.e., 25 percent bloom) and a raised cut height at harvest to ensure a cut above the now elevated crown height. If taproots are unbroken, natural settling can occur during the growing season, and if they are reseated, the alfalfa should survive into the next growing season. Stands entering winter with elevated crowns will likely suffer winter injury and kill.

What are our options?

Depending on the severity of the heaving, right now could be the best time to establish a plan to ensure adequate forage inventory for the upcoming year. If heaving is confined to patches in the field, consider renovating the stand by re-seeding the affected patches. If moderate heaving allows you to keep the field for more than one year, consider planting red clover or a mixture of red clover and grass to ensure an adequate forage yield. If the goal is to maintain the field for this growing season, and if additional legume yield is desired, consider berseem clover, crimson clover or even field or forage peas, depending on the ratio of seed cost to potential yield. It is important to remember that, when another grass or legume is patched into an existing stand, the newly-seeded area will need time — often, a minimum of 60 days after planting — to become established prior to harvest. If severe heaving has taken place and the alfalfa stand is terminated but additional forage is required, other options include warm-season sorghum Sudangrass and Sudangrass BMR varieties, which can be planted and harvested within a 50- to 60-day window, followed by subsequent harvests every 30 days into the fall (in optimal growing conditions). Other cool-season grass options for filling forage inventories include spring cereal grains, such as oats, barley, triticale and Italian rye grass.

Minimize the potential of future heaving

The most practical method of reducing heaving in future years is to leave residue or approximately six inches of stubble on the soil surface from the fall through the winter. Residue helps reduce heaving by insulating the soil, which decreases the potential for freezing and thawing. Another great way to reduce instances of heaving is tiling fields to enhance draining internally and on the surface.

Key Tips for Reducing your Feed Costs Next