By Jim Gibbs
The author is a veterinarian and ruminant nutrition scientist at Lincoln University in Canterbury, New Zealand. 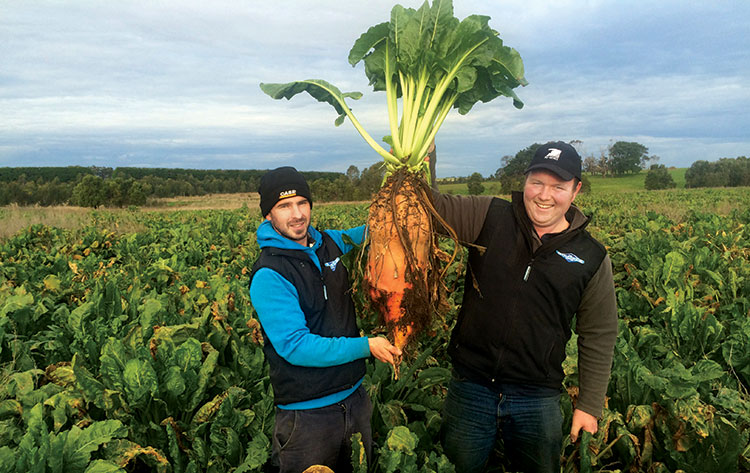 A few years ago, I gave a guest lecture on New Zealand forage grazing systems at a U.S. agricultural college. The professor introduced me with a statement that made me laugh and reminded me how Kiwi livestock systems are seen internationally. He told the audience that if you want to learn space travel, you go to NASA, and if you want to learn pasture-based livestock systems, you go to New Zealand.

Of course, what he could have added was that New Zealand had no choice but to develop productive forage systems because no grain is grown here, and the landscape appears to have been built just to grow and graze ryegrass year-round. Nevertheless, the livestock industries are well known for those green paddocks under the snowy hills, and the efficient systems of grazing management that make the most of the sun, rain, and geography.

But every grazing system has seasonal shifts in production, and the temperate island climate of New Zealand is no different. It also has cool winters and dry summers that limit pasture growth.

Like beef production systems on grass worldwide, this has the effect of reducing stocking rates and delaying slaughter age to 26 to 36 months, which puts a drag on farm profitability and carcass quality. Both farmers and meat processors are affected by these productivity limitations.

To remedy this seasonality in grazed beef production, a project was undertaken about ten years ago between Lincoln University and Silverstream Beef, a large beef operation in the South Island. The forage fodder beet was grown in order to transfer large yields of high-quality, standing feed from spring and summer growth to autumn and winter grazing, producing finished steers from 100% forage in 14 to 16 months.

This project was successful and went on to develop and validate two highly productive and profitable beef grazing systems based on grass and fodder beet that have been widely taken up by the beef industry. Fodder beets have had the fastest farmer adoption rate of any forage in New Zealand history with use going from 0 to 170,000 acres in 10 years. Because these systems suit large-scale farms, there are now numerous operations finishing and marketing 2,500 to 5,000 cattle annually. 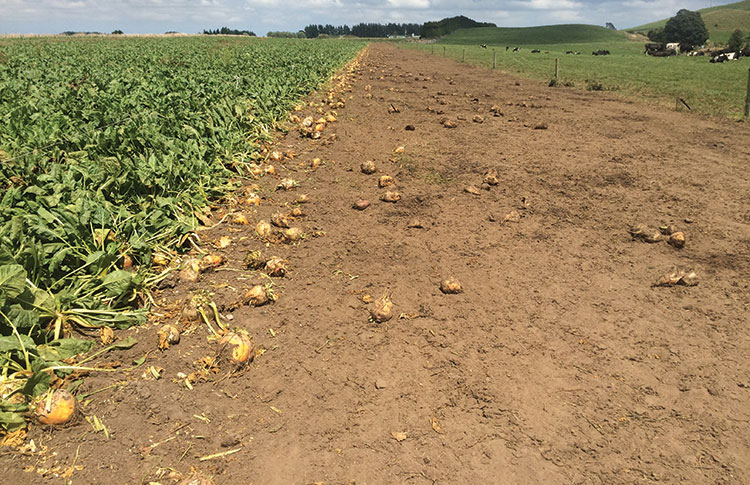 Fodder beets are strip-grazed and used as the primary diet forage resource (about 90% of the ration) for either 130 to 150 days (6- to 7-month-old weaned calves at 600 pounds) or 90 to 110 days (18-month-old cattle at 900 pounds) during autumn and winter. The weaned calves gain about 2.2 pounds per day on the fodder beets and then are grazed in spring on pastures for 90 days to a slaughter weight of 1,200 to 1,300 pounds at 14 to 16 months. The older cattle are finished on the beets at 1,300 pounds or more for the late winter/early spring market; this is when there is a premium price for good beef.

The carcass characteristics of beet-grazed cattle are the result of the high-energy, low-carotene content of the plant and the accelerated slaughter age. The carcass to liveweight yields are 56% to 58%, well above the typical 52% seen in traditional pasture systems. Fat covering and marbling are strong with white fat.

Only about 40% of New Zealand steers typically grade as elite category one, but greater than 70% of beet-grazed steers do so and almost 100% from experienced operations. These crop attributes have pushed farmer adoption since its early development.

Fodder beets, which are also called mangels, are an older cousin of the sugar beet. Its development as a grazed crop in New Zealand has led to very different agronomic practices because of a higher nitrogen content, greater total dry matter yield, and especially enhanced leaf yields. All of these characteristics have helped bolster grazing success.

Sown in spring, it is a biennial crop that can be grazed from autumn until the following spring. Current New Zealand yields are greater than 15 tons of dry matter per acre, producing a feed of suitable protein content (11% to 13%) and cereal grain feed energy content for about $60 per ton of dry matter. This is about one quarter of the price of cereal grain in New Zealand and represents an opportunity to achieve comparable energy intakes and liveweight gains to cereal grain feeding on an all-forage system.

With higher nitrogen rates compared to sugar beet crops, bulb nitrogen and phosphorus content is higher. This enables the crop to grow more leaves, which drives liveweight gains. Split fertilizer applications with late-season nitrogen and potassium also hold leaf quality into the colder months. Planting row width is narrow and the cattle harvest the bulbs themselves, so plant population is relatively high, offering a greater leaf mass and earlier canopy closure to reduce herbicide use.

Not for all regions

The fodder beet grazing systems operate most effectively in landscapes with relatively dry, firm autumn and winter soils and a growing season with water and warmth suitable for good yields.

I have been asked if U.S. beef grazing sectors can also use beets. While not all harsh Northern and Midwest winters will suit beet grazing, both the Northwest and the Southeast have suitable growing and grazing climates with limitations to forage finishing that appear similar to New Zealand. There is no obvious reason why this system could not be developed in these U.S. grazing regions to provide similar seasonal feed resources and be used as it is in New Zealand.

This article appeared in the February 2020 issue of Hay & Forage Grower on page 26.

It’s forage that drives the supplement program Next

Be an intentional pasture manager Previous