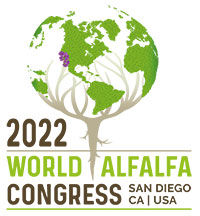 “Profitable Alfalfa Production Sustains the Environment” is the theme organizers from multiple nations have chosen for the 2022 World Alfalfa Congress, to be held on 14-17 November 2022 in San Diego, CA USA. The event will focus on a myriad of alfalfa-related topics to feature the economic, agronomic, and environmental benefits alfalfa offers, as well as the critical role it plays in global food production.

Alfalfa (sometimes called Lucerne or, more affectionately, the “Queen of Forages”) is one of the most important and sustainable forage crops in the world and the fourth most valuable field crop in the United States. Alfalfa is a crucial part of the agricultural landscape, as it is grown on over 16 million acres in the US and is important in many other countries. World trade in alfalfa hay has increased in recent years, with a strong interest in Asia, Europe, North Africa, and the Middle East.

“It’s important to recognize the tremendous contribution alfalfa makes to food production, on- farm profitability, as well as its role to enhance soil health and the environment,” says Dan Putnam, UC Davis Forage Specialist, and Program Chair. “With its ability to sequester carbon and return nutrients to the soil, alfalfa is poised to play an increasingly important role in the move to ‘climate-smart’ agriculture.”

The program features a one-day workshop on irrigation and pest management training, followed by two days of 40+ speakers on subjects touching on something for everyone, including forage quality, economics, exports, crop production, equipment, and genetics. The World Alfalfa Congress will also feature poster sessions with over 80 posters. The final day wraps up with a tour of the Imperial Valley of California, one of the most productive agricultural regions in the world and one which is rich in the production of alfalfa hay and seed.

Sign up to participate today in this can’t miss meeting before Early Bird Rates go up on October 1, 2022. “We have nearly 50 exhibitors and nearly 300 people registered, and over 130 of those have registered for the tour,” said Nicole Helms, Executive Director of the California Alfalfa & Forage Association (CAFA), who manages the registration process. “The tour is filling up fast, and we have limited space available; we encourage folks to register now before the tour sells out,” Helms said.

The Congress is being organized by an international committee from around the globe, though hosted by the American contingent. “We have a number of attendees from Europe, the Middle East, China, and South America,” said Helms. This meeting follows the first World Alfalfa Congress (Bengbu China, 2015) and the second World Alfalfa Congress (Cordoba Argentina, 2018).

“This meeting gives us a chance to enrich our knowledge of this important crop,” said Dennis Hancock, Director of the USDA-ARS Dairy Forage Research Center at Madison, WI, and a Congress co-organizer. “This is a great opportunity to exchange experiences and scientific findings from around the world and to engage with farmers and practitioners.”

The Congress targets farmers, scientists, consultants, CCAs and PCAs, and industry members, as well as the general public interested in this important crop. Continuing Education Units (CEU) will be available for the Western US; if your state is not represented in the Western US and you would like to receive CEUs, please contact Nicole Helms by September 16, 2022.

“If your company is involved in the alfalfa industry, you won’t want to miss this terrific opportunity to promote your products and support your industry. A handful of sponsorships and exhibitor opportunities remain but act quickly,” said Beth Nelson, key organizer and president of the National Alfalfa and Forage Alliance (NAFA). We would like to thank and recognize those companies that have already taken action to get involved in the 2022 World Alfalfa Congress: