Alfalfa harvests are considerably ahead of schedule this year in many areas. Spring was quite warm allowing growers to start first cutting early, and many growers are well on their way with second cutting. Some fields are 10 days or more ahead of schedule for a “normal” year. This is partly due to the weather, but also many growers are cutting alfalfa at very immature growth stages to ensure top dairy-quality hay in response to market conditions (low price and a sluggish market for mature, lower quality hay).

Alfalfa weevil populations where incredibly high and the hatch extremely long, resulting in damage under the windrow affecting regrowth for second cutting in some areas. Late-June and early-July weather has been unseasonably mild so far without the sweltering heat we experienced last year. This has resulted in good yields of cool-season perennial grasses like orchardgrass and tall fescue.

Many parts of South Dakota are experiencing warm and dry conditions. The northeast and western region (Black Hills) of the state are lacking moisture going into the middle of the growing season. A large portion of the Black Hills growing area is experiencing moderate to severe drought. Many producers across the region are concerned about their forage production and market value this year. Farmers and ranchers in western South Dakota are struggling with getting their first cutting of alfalfa, which may have a significant impact on hay production in the region.

Reports of alfalfa weevil larvae causing serious defoliation in the crop have been observed in eastern South Dakota. Throughout the growing season, alfalfa weevils can be detrimental pests, so scouting should continue after the first and second cutting. This can prevent serious yield and quality losses if done in a timely manner. It is also beneficial to scout for potato leafhoppers, especially entering into the third cutting. Although the majority of commercial alfalfa varieties are resistant to potato leafhoppers, it is always a good idea to scout and monitor populations after the second cutting.

Michigan is tinder dry in most of the state. The central area and eastern side are experiencing the most severe conditions. Reports of “half a crop” are coming in for second- and third-cutting alfalfa as a result of very spotty showers appearing on radar maps. However, most producers are getting excellent quality dry hay. One producer indicated that alfalfa and grass quality for his first-cutting dry hay is the best he’s had in over 15 years.

Potato leafhopper damage in alfalfa is beginning to be reported in many parts of the state due to the dry, hot conditions. Producers have indicated that they will closely monitor the infestations for possible control after cutting.

Both corn and soybeans are showing signs of drought stress, resulting in shorter plant heights and a lack of canopy coverage. 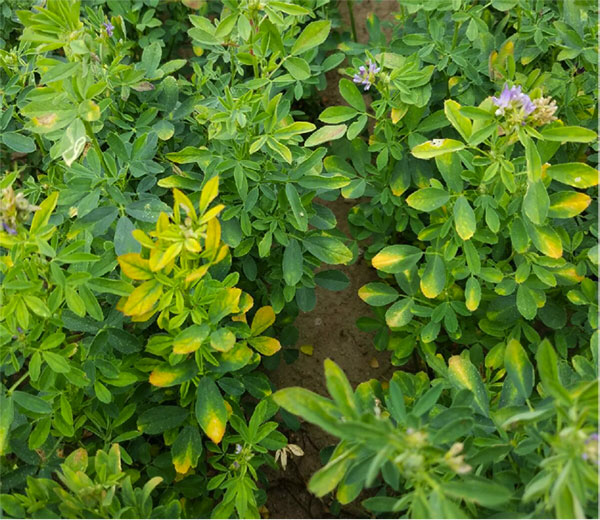 Alfalfa hay acres surprisingly up in the West Previous