This item has been supplied by a forage marketer and has not been edited, verified or endorsed by Hay & Forage Grower.
For over 40 years, Krone has been building the highest-quality equipment—and gaining the trust—of North American farmers. It began with the Krone disc mowers, which farmers quickly realized could be trusted to deliver a level of quality cutting they had not experienced before.

“These new disc mowers combine the durability and reliability of our trusted line of current disc mowers, while adding new enhancements that our customers have asked for,” said Jody McRee, Krone Sales Operation Manager. “Building on the reputation of our trusted AM and EasyCut mowers as being ‘bullet proof machines,’ these new models are just as reliable, while raising the bar for improved productive cutting in the field.”

What are hay and forage growers saying about these new Krone disc mowers?

We talked with Alan and Warren Flake, who run a family cattle and haying operation outside Philadelphia, Mississippi. The Flake brothers had a chance to run a new Krone ActiveMow R disc mower last fall. 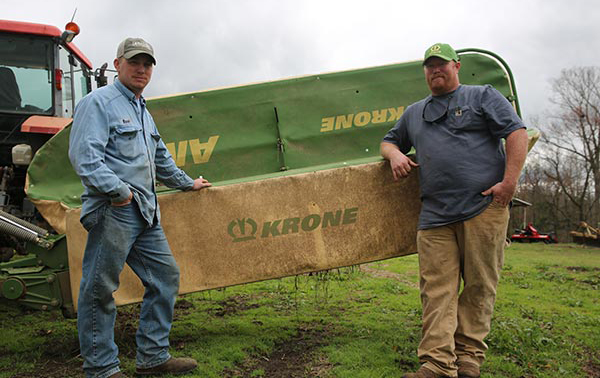 Warren and Alan Flake run a new Krone ActiveMow® on their cattle and hay operation in Philadelphia, Mississippi.

About Krone Quick-Change blades, which simplifies changing blades: “We really like the simplicity. It’s a lot easier to change the blades. And there are no tools required other than the lever that came with the mower,” says Alan.

About Krone’s exclusive No-Inner-Shoe design: “The Krone mower doesn’t have as much drag on the tractor, improving fuel efficiency and it cuts better, laying the hay out better so it can dry quicker,” says Alan.

About the exclusive Krone direct drive system, which delivers reliable power to the SmartCut cutterbar, using NO belts: Alan says, “Krone mowers are easy to maintain, and last a very long time. It has very good wear components, so we know we’ll get a lot of service out of this mower.”

Why should growers buy a Krone disc mower? Says Warren: “This new Krone disc mower is heavier built, it’s quicker and the blades last longer. It floats better, less drag on your tractor, and turns quicker. It really doesn’t give you any reason to go anywhere else.”

To select the right mower for you, check out Krone’s interactive disc mower selection tool.

To make it easy for hay and forage growers to pick the right Krone mower, Krone has created an online, interactive disc mower selection tool. This selection tool, available at krone-northamerica.com/discmowers, makes it quick and easy for you to match the right Krone disc mower—from Krone’s full line of disc mowers—to your specific operation and needs. Or to see this new generation of disc mowers in person, visit your Krone hay and forage equipment dealer today.

Krone was founded in Spelle, Germany in 1906 and established Krone North America in Memphis, Tennessee in 1973. The company employs more than 4,500 associates globally, including 160 in the United States. Krone’s cutting edge hay-and-forage products are sold through a network of more than 400 dealers across the United States, Canada, Mexico and Puerto Rico. Still owned and operated by the Krone family, the company’s product line includes high-capacity mower conditioners, disc mowers, rotary tedders and rakes, round balers, large square balers and a full range of self-propelled forage harvesters. Krone equipment is built on customer trust, delivering on the needs of its customers and guided by their input. Since Krone is first to market with the newest technology and efficiencies, Krone equipment is the first choice of North American hay-and-forage producers. For more information, visit krone-na.com.

Fox-Marrs Named President and CEO of JCB North America Next