To graze or not to graze high-nitrate forages? 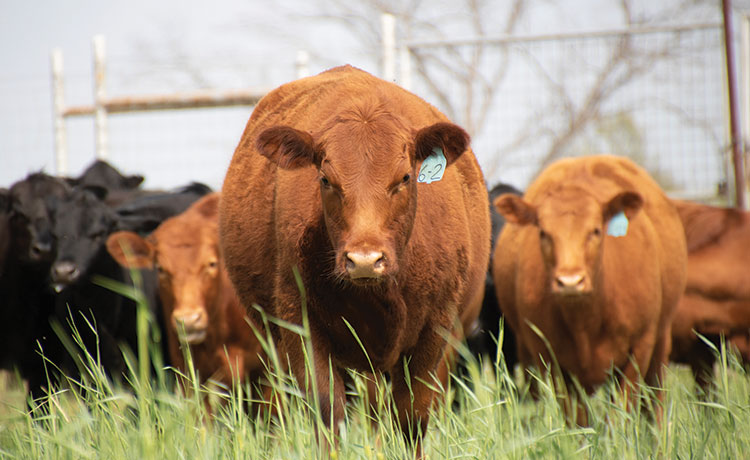 Over the past few years, we have seen many instances where cattle grazed annual forages that, when tested for nitrates, were considered toxic, and yet the cattle had no adverse health effects. Digging into past research on nitrate toxicity resulted in some very enlightening findings.

Grazing fresh forages may be lower risk than current recommendations for several reasons.

Fresh forages release nitrates into the rumen at a slower rate than dry forages. In 20 minutes, 80 percent of the nitrates in hay were released into water, but only 30 percent of the nitrates in fresh forage were released. The slower release rate allows rumen microbes that convert toxic nitrite to ammonia to better keep up with nitrate inflow. In fact, current recommendations are mostly based on drenching animals with a known amount of nitrate salts, essentially making the nitrate immediately available.

Grazing cattle often have a slower rate of dry matter intake when eating fresh, pasture forages; again, this means that the microbes can better keep pace with the nitrate inflow.

Higher dietary energy enhances the rate of detoxification. Cattle grazing immature forages can have lower risk than mature forages with the same amount of nitrate. Previous research found that feeding a couple pounds of corn to cattle when using mature, high-nitrate forages can lower the risk of poisoning.

The capacity of the microbial population in the rumen to detoxify nitrite is greater as they are exposed to more nitrate. Nitrate concentrations tend to be highest in the bottom of the stem and lowest in the leaf. If given the opportunity, cattle will generally select leaf material first and work their way down the plant, slowly increasing their nitrate exposure over the grazing period. Therefore, the microbial population in the rumen of grazing cattle may have time to “adapt” to higher nitrate concentrations by the time the animal consumes the stem and lower portions of the plant.

Even when the potential for nitrate toxicity exists, a planned grazing strategy can be used to lower the risks and reduce cattle losses. We recommend the following approaches:

Know the nitrate content: Test annual forages for nitrates prior to grazing to know how much risk is involved when grazing those forages. Sampling at ground level tells you the worst-case scenario.

Consider grain supplementation: This will supply energy for rumen microbes to convert nitrate into bacterial protein and help minimize the accumulation of the intermediate nitrite form. Grain feeding may be of limited benefit for high-quality cover crops but is a good idea when grazing more mature forages.

Gradual adaptation: Do not strip graze high-nitrate forages; allow cattle to be selective. Losses from nitrate toxicity are more likely in cattle not adapted to nitrate. The bacteria in the rumen capable of converting the toxic nitrite to ammonia will increase in numbers when nitrate is available to them.

Adapted animals can be safely fed higher levels of nitrate than unadapted animals. To adapt the cattle, start by grazing the lowest nitrate fields and then work up to the highest. Be sure to graze higher nitrate fields lightly to allow animals to selectively graze the plant parts that are lower in nitrate concentration.

Ultimately, the decision to graze high-nitrate fields is a judgment call and a question of how much risk one is willing to take.

This article appeared in the April/May 2019 issue of Hay & Forage Grower on page 18.

Weed and brush control: myths and mistakes Next

I can’t wait to see if this works Previous