By Scott Flynn
The author is a field scientist for Corteva Agriscience. He’s based in Lee’s Summit, Mo. 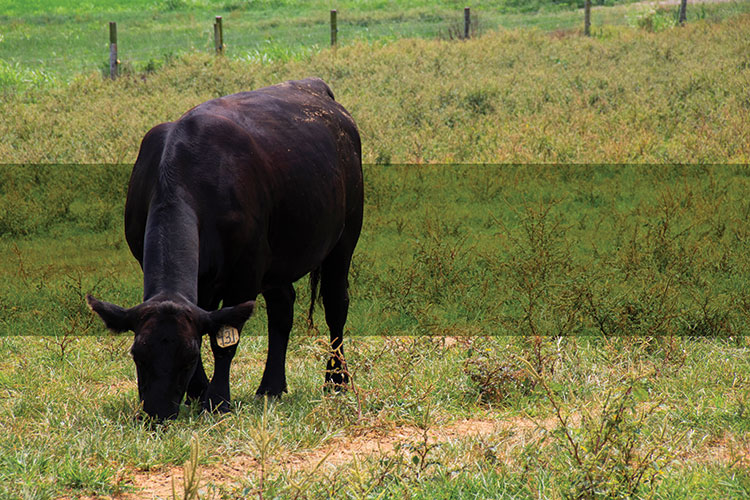 Don’t allow weeds and brush to limit the production potential of your pastures.

Weed and brush encroachment into pastures and hayfields can lower the ability to meet nutritional needs of most livestock operations. Over time, most producers eventually reduce animal numbers or supplement herds to compensate for forage loss. Meanwhile, a shortened grazing season and a need for more hay is realized as pastures decline. I often tell producers looking for more grazing acres that the cheapest pasture acres they will ever buy are the ones they gain when weeds and brush are controlled.

Most producers recognize the negative impacts of weeds on forage production and seek to control these invaders. However, several of the methods used for control lack effectiveness. After years of working to solve many of the pasture weed and brush issues that producers face, my colleagues and I have noted a few questionable beliefs and practices that continue to be employed.

“Mowing is a cheap way to control weeds,” is one often heard statement. Factoring in time, along with fuel, maintenance, depreciation, and storage of equipment, most ag economists will place a minimum cost of $15 per acre on mowing. That’s really not cheap, especially when the results may only last a few weeks.

It’s not that mowing can’t control weeds; it’s that the number of mowings and the timeliness of each mowing are critical for long-term control. Effective programs require mowing two to three times each season over two or more years, preventing seed production and exhausting plant energy reserves. If we use the $15 per acre minimum, we’ve spent $60 to $90 per acre for weed control.

In addition to cost, there are other issues with mowing. First, mowing also removes desired forage. Each inch of forage that is cut may remove 75 to 400 pounds of grazable dry matter per acre, depending on the forage species and density. While mowing forage stands that have slowed or stopped growing can create new, high-quality growth, mowing repeatedly over the season to suppress weeds reduces available forage. Second, plant debris from mowing leaves a dense cover that can smother desirable forages and create bare areas for weeds to invade. 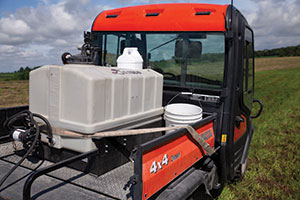 Herbicides must be used in conjunction with sound grazing management practices and adequate soil fertility.
“Shred trees and brush, then just use herbicide on the saplings that come back.” This may be one of the biggest mistakes made when trying to control woody plants. Once you mow/shred pastures infested with woody species, you’ve committed yourself to several years of treating woody plant resprouts or emerging saplings.

The problem is, while you remove the above-ground growth, there is little effect on the root system that once supported this woody plant. The task now is to get enough herbicide into resprouts and small saplings to kill the disproportionally large roots. It’s much like using a funnel upside down to pour oil in your vehicle. The correct quantity is being used, but it doesn’t all end up where you need it.

If possible, foliar- or basal-treat trees and brush and allow them to stand for at least 60 days during the growing season before cutting. This will give the herbicide time to move throughout all parts of the plant. For foliar treatments, make sure leaves of target brush have fully expanded to maximize exposure to the herbicide. Treating leaves that are not fully expanded often will not allow sufficient transport of herbicide to the root system and result in poor control.

“My cows eat annual ragweed, so why would I want to kill it?” Annual ragweed can be found in all of the lower 48 states. Cattle gladly consume annual ragweed during the early part of the grazing season. Some cattlemen will even say that they don’t want to control ragweed because it contributes to early season grazing. But there is a fundamental problem with this line of thinking, especially for producers who graze cool-season grass pastures.

Annual ragweed is usually being grazed during a time of year when grasses are in abundance. But as the heat of summer approaches, ragweed begins to mature and the palatability declines. Now the once tasty plant is stemmy and unpalatable, competing with desired forages when they are needed the most. In many cases, the early season benefit of ragweed isn’t worth the loss of desired forage incurred during the summer.

“Weeds have higher crude protein than most forages and should be grazed.” Yes, many weeds can have high crude protein levels and appear to be quality-competitive with other forage grasses and legumes. As plants mature, they usually become more stemmy and higher in structural carbohydrates, which reduce digestibility and nutrient availability. The outcome is a reduction in available energy and palatability. For example, early vegetative growth of Canada thistle may have a crude protein content that exceeds 25 percent, but once plants have matured those levels may drop below 10 percent.

Even if the quality analysis of weeds look spectacular, it is completely meaningless if the animals choose not to graze them. Because crude protein is a rough calculation based on the amount of nitrogen in the plant (percent plant nitrogen times 6.25 equals percent crude protein), we could make the argument that ungrazed weeds are shifting soil nutrients, particularly nitrogen and water that would otherwise be available for growth and quality of desirable forages.

We also have to address the issue of why animals choose not to eat certain weeds. Not all plants in the pasture are edible, and the case for grazing them ignores the presence of poisonous plants or those that can cause serious physical damage to the animal. Carolina horsenettle, for example, can be toxic if too much is grazed. Even if grazed under that limit, the horsenettle spines irritate the mouth and esophagus, creating discomfort and reducing forage intake and performance.

While livestock can safely graze some weeds, the practice of grazing others is risky and a bit inconsiderate of the animals we care for. In short, it takes more than nutritive value to justify grazing.

“Herbicides are the only way to keep weeds at bay.” No, they’re not. Herbicides are a great way to shift production back to our desired forage plants and improve our ability to meet livestock nutritional requirements in a low-cost manner. It’s not uncommon to see enhanced forage production of 1 to 1.5 pounds for every pound of weeds controlled. The problem is this doesn’t last forever when animals and adverse environmental conditions are involved.

Proper integration of many practices, including stocking rate, grazing rotation and duration, and the rate and timing of fertilizer and herbicide applications, are critical for holding weeds at bay. Keeping a desirable forage base that is dense and competitive helps hold out these invaders and extends weed control. Going back to a grazing system that encourages heavy patch grazing and little to no rest will result in a reinfestation within a year or less.

If you have ever taken a short course on grazing management, there are some basics that you hopefully learned about keeping forage productive and abundant. The boiled-down version is this: Don’t graze too close, and don’t come back too soon.

Animals grazing forage species too low and too frequently reduces plant carbohydrate reserves and slows regrowth. With some species, grazing too close removes the growing point and slows or even stops forage regrowth. Coming back to graze forages too quickly after regrowth further exhausts the plant’s energy reserves.

Management that considers and corrects past deficiencies can create a forage system that is much more resilient and resistant to weed infestations, prolonging weed control and building a more competitive and productive forage base. Practices such as fertilizing, burning, and reseeding can also help make stands much more competitive and further complement good grazing practices.

Feeding hay for better soils Next

To graze or not to graze high-nitrate forages? Previous