By Mike Trammell
The author is a senior plant breeder at the Noble Research Institute. 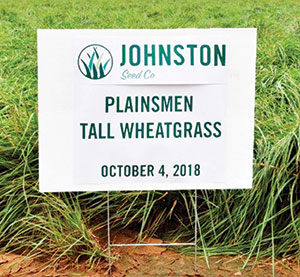 Plainsmen tall wheatgrass offers improved persistence and higher fall yields.
The Southern Great Plains can provide an abundance of forage for putting weight on stocker cattle. However, problems can arise during April and May and again from September to November when the region does not produce enough quality forage for livestock to achieve good weight gains (Figure 1). These forage gaps can wreak havoc on livestock producers’ planning and bottom lines, often forcing them to resort to costly feed supplements so their cattle can continue to gain weight.

One of the major goals of the Noble Research Institute has been to develop perennial cool-season forages that could fill these forage gaps from autumn through spring in the Southern Great Plains. Having no forage gap would mean that more cattle could be economically grazed or that grazing livestock could be retained longer.

Once improved varieties are successfully created, their performance is analyzed through extensive evaluations, such as livestock grazing trials, to assess their economic impact and safety and to develop crop management practices that capitalize on the new cultivars’ value-added traits.

For the majority of the last 20 years, perennial grass breeding efforts at the Noble Research Institute have been centered on developing cultivars of tall fescue to fill forage gaps when bermudagrass is dormant or to replace or complement the planting of winter annuals such as winter wheat or cereal rye. These efforts have been successful with the development and release of Texoma MaxQ II in 2008 and Chisholm summer-dormant tall fescue in 2016.

Why not tall wheatgrass?

In our initial search for gap fillers for the Southern Great Plains, we tested some cool-season grasses not as commonly used in the region but often used as forage elsewhere. One of these cool-season grasses was tall wheatgrass, which is more commonly used as forage for grazing livestock in the Northern Great Plains and the intermountain regions of the western U.S.

Tall wheatgrass is a cool-season perennial bunchgrass that is useful for both hay and pasture. It can grow as tall as 10 feet in the right conditions but averages 3 to 4 feet in height. It is adapted to a wide range of soil types and climates but is often recommended for regions with at least 12 to 14 inches of rainfall or sites with high water tables. It is very winterhardy and can grow at elevations up to 6,000 feet. It is also well adapted to saline-alkaline-type soils, where few other species will survive, and its yields are unsurpassed under these conditions. Tall wheatgrass can also be established in soils with a pH as high as 8.

Tall wheatgrass, because of its late maturity (early to mid-July in the Southern Great Plains), provides a long grazing period when used for pasture. At first glance, this seems like the perfect fit to fill forage gaps and extend the grazing season. However, one issue with tall wheatgrass has always been its low palatability and the coarseness of its leaves, especially late in the growing season. To avoid this issue, plants should be grazed heavily to keep them in a vegetative state. However, this heavy grazing can lead to poor stand life over time.

As part of a larger effort to develop perennial cool-season grasses for the Southern Great Plains, the Noble Research Institute began work in 1997 to improve the persistence and yields of tall wheatgrass. Recently the Noble Research Institute released a new tall wheatgrass cultivar called Plainsmen. Plainsmen was selected from the publicly released tall wheatgrass cultivar Jose, which was developed by the Agricultural Experiment Station of New Mexico State University and the USDA Soil Conservation Service (now the Natural Resources Conservation Service) in 1965 for its drought and saline-alkaline tolerance.

Plainsmen was released for its improved persistence under grazing and its higher forage yields, especially in the fall. After three years of intensive grazing at Vernon, Texas, stands of Plainsmen were 75 percent greater than those of Jose, and under dryland conditions at Iowa Park, Texas, Plainsmen produced 45 percent more fall forage over three years than Jose (Table 1). This increase in fall forage when the leaves are not as coarse can be highly desirable to grazing livestock.

Plainsmen has excellent seedling vigor but, like most wheatgrasses, can be slow to establish. Seed can be clean-tilled or no-tilled into a firm, weed-free seed bed at a rate of 10 to 15 pounds of pure live seed (PLS) per acre. To ensure good establishment, haying and grazing should be deferred until the second growing season when plants are at least 8 inches tall.

This grass is also beneficial as a perennial ground cover, which includes controlling soil erosion and water runoff, limiting water evaporation during summer, and boosting soil health by improving the overall physical and chemical properties of the soil. Tall wheatgrass also offers excellent cover for wildlife, and livestock can use it for protection during calving or lambing season.