There’s nothing trite about the bite 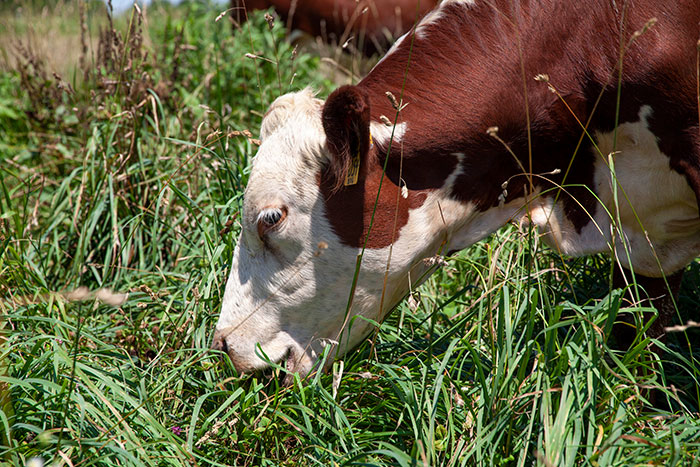 A lot goes into that first part of the equation — adequate soil fertility for sure.

But there’s also the challenge of keeping pastures within a linear, rapid growth phase by not over- or undergrazing such that plants quit growing or are growing extremely slow. This means not grazing pastures too short and doing your best to initiate grazing before or immediately after flowering and heading.

Once pasture productivity potential is optimized, it then becomes a question of getting animals to consume the forage. The end game of grazing livestock, be it for weight gain, milk, or fiber, is a function of dry matter feed intake, and it needs to be high-quality feed.

Those brave and persistent souls who make their living by studying the interactions of pasture forage and livestock performance will often assess forage intake by observing grazing animals and measuring the amount of forage consumed per bite taken, how many bites are taken per unit of time, and how much time is spent grazing. These three fundamental factors are then multiplied together to yield total forage intake, and the answer will have a lot to do with how livestock perform or, conversely, don’t perform.

Dennis Hancock, University of Georgia Extension forage specialist, often discusses how certain situations will impact bite size, the amount taken per bite, and grazing (eating) time. His assessment goes something like this:

When pastures are short or overgrazed, there is less forage mass per bite, more bites per minute, and the minutes spent grazing probably will go up for a period of time. Hancock notes, however, that at some point the animals will “wear down” as they try to graze short pastures. There’s always a limit as to how long an animal will graze.

Undergrazed or tall pastures result in the amount of forage per bite going up, but the number of bites per minute declines. The time spent grazing will stay the same or slightly drop as gut fill occurs more quickly.

Logically, the amount of forage eaten per bite declines if the mouth (muzzle) size is small. This has the overall effect of less than optimum forage intake.

The animal is ill or uncomfortable:

When an animal is stressed, such as by heat, its grazing time is drastically reduced. Most of its time is spent lying down or standing under a shade tree.

Though grazing minutes are purposely restricted, mass per bite and bites per minute may actually go up, especially if they enter the pasture after not eating for a period of time.

Grazing time is reduced, and the animal may not bite at the same rate.

The animal stays full longer as forage stays in the rumen for an extended period. The animal becomes a less aggressive grazer and both the number of bites and the minutes spent grazing decline.

When pasture forage quality is exceptionally high, both the number of bites and the minutes spent grazing are enhanced.

There are significant differences in the grazing habits of different livestock species. Cattle will spend up to eight hours per day grazing, most of which occurs at dawn, late afternoon, and at dusk. Their bite rate is relatively constant at 48 to 54 bites per minute but can range from 30 to 90.

The grazing time for cattle is also genetically influenced. In one grazing study, identical twins grazed almost exactly the same amount of time, but the differences between twin pairs differed by up to 40 percent. Hancock notes that the findings of such a study implies that good grazers can be selected for.

Though a bite of pasture forage may seem insignificant at first glance, for the livestock producer who grazes cattle, it is actually the foundational animal activity.