A case for no-till

By James Rogers, Scott Robertson
Rogers is a forage systems associate professor and Robertson is a senior research associate at the Noble Research Institute, Ardmore, Okla. 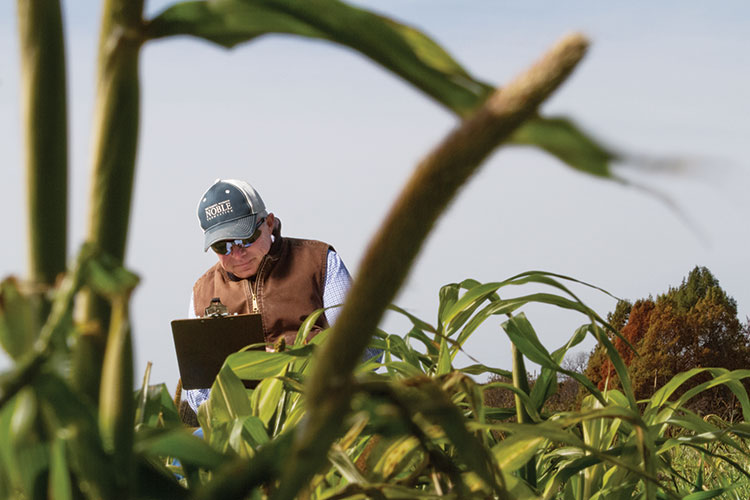 No-till planting methods have been in existence for decades and while this method of establishing crops has grown in acceptance, there is still a lot of tillage being used. Often when contemplating the switch from till to no-till production practices, reasoning is focused on production and the positive or negative impact no-till may have on production.

Production is important and should play a big role in considering the change, but there are other reasons that might be overlooked that make no-till appealing. Here are advantages to no-till production from the perspective of a Southern Plains forage producer.

Getting an annual forage crop into the ground in a timely manner impacts biomass production, grazing days, and workflow. We currently have a wheat pasture grazing study where we are comparing the treatment effect of till versus no-till. In half of our treatment area, we are double-cropping a summer cover crop while the other half is summer fallowed. This allows us to compare wheat pasture production using till or no-till following summer fallow and till or no-till following a summer cover crop.

In general, our no-till soils are firmer, and we are able to come into these areas much sooner with equipment following a rainfall event compared to the tilled paddocks. Our seedbed preparation is easier and requires less time as we apply a burndown herbicide. With no-till, we only need three pieces of equipment: a tractor, sprayer, and no-till drill.

Fall planting dates for wheat have varied very little between till and no-till due to less rainfall during our September planting window that can delay field operations. When we do see a difference in the fall, it favors no-till. In spring, we see a big difference for planting summer cover crops following wheat. No-till planting dates for summer cover crops have ranged from 15 to 37 days earlier than till during the three years of the study.

Obviously you need to have soil moisture for crops to germinate and produce. In the wheat pasture study, we are measuring the treatment effects of till or no-till and summer cover crops on soil moisture. To do this, we have soil moisture sensors deployed at depths of 3 inches, 10 inches, and 24 inches in each treatment replication.

Figure 1 is the three-year average soil moisture of till and no-till soils at the three depths at the end of summer prior to the establishment of wheat winter pasture. These paddocks would have been summer fallowed either by tilling or chemically. In Figure 1, note that at each soil depth, no-till soils have a higher moisture content following the summer months. In the Southern Plains, this is an advantage and provides no-till soils with more resiliency compared to tilled soils.

When we compare till and no-till following a summer cover crop (Figure 2), the soil moisture story appears to have changed, but has it really? From previously, recall that the planting date for no-till cover crops was almost one month earlier than tilled cover crops.

Soil temperature also impacts microbial activity. Soil microbial activity slows at soil temperatures above 85°F. If we look at the average of our data from May to August over three years, tilled summer fallow soils average 2°F warmer than other treatments. No-till soils averaged 1.6°F cooler than tilled soils. It’s interesting to note that when a summer cover crop is added, even tilled cover crop soils are cooler by almost 1°F than tilled-only soils.

Tilled, bare soils are vulnerable to wind and water erosion. As a producer, this is a cost to you. When soil moves from your field to a neighbor’s field or anywhere else, that is a loss of production, fertilizer, herbicide, soil health, sustainability, and property value. A problem has been quantifying that loss. In our study, we see soil move, especially during big rainfall events, which seem to be becoming more common.

Recently, we have been using drones equipped with a camera that creates a 3D image using photo telemetry to help us quantify soil loss. In areas where we are experiencing soil movement, the drones are flown and the eroded areas are measured in three dimensions. Then, we calculate the volume of the eroded area to come up with the amount of soil it would take to fill the area back up level with the surrounding field. An example of this imagery is shown in Figure 3.

In Figure 3, the purple-colored areas indicate where soil has moved. In one site, we calculated that a volume of 8 tons of soil had been displaced. In our no-till areas, we have very little soil movement. In tillage paddocks with a cover crop, our soil loss is very little due to ground cover the majority of the year by double cropping wheat and summer cover crops.

There are downsides to no-till. We have to rely on herbicides for weed control, and weed resistance can be an issue without good herbicide management. Another issue is that good no-till equipment is expensive; in some crops, there may be a yield drag for a period of time.

No-till benefits are mostly positive and of the reasons provided here for adopting no-till production practices, reducing soil erosion is the biggest. Soil losses can never be regained in a lifetime.

This article appeared in the August/September 2019 issue of Hay & Forage Grower on pages 30 and 31.

Locoweed is a problem on many fronts Next