In a basic view, the ensiling process consists of the conversion of simple sugars to organic acids — specifically, lactic acid — under anaerobic conditions. However, the exposure of silage to air during feedout allows spoilage yeasts to become metabolically active, utilizing residual sugars and lactic acid to start the process of aerobic deterioration.

In reality, the majority of the readily spoiled material consists of high-quality nutrients, so silage with a high degree of deterioration not only leaves less overall tonnage to be fed, but also the remaining feed has lower nutritive quality. Additionally, the spoiled feed contains detrimental microorganisms that may produce toxins.

The term aerobic stability refers to the amount of time that a silage remains cool and stable after being exposed to air. When looking at options to enhance the aerobic stability of silages, a popular alternative is to use a microbial inoculant containing Lactobacillus buchneri, applied at a minimum of 400,000 colony forming-units (CFU) per gram of fresh forage.

This lactic acid bacterium was revolutionary in the silage world when it was launched since it possesses a unique metabolic feature that was noticed when first isolated: the production of moderate amounts of acetic acid during the anaerobic storage phase. Acetic acid is a potent antifungal compound that inhibits the development of spoilage yeasts, leading to improvements not only in silage but also total mixed ration (TMR) stability.

Two is better than one

There is an extensive and growing body of peer-reviewed, independent research supporting the effects of L. buchneri in a wide range of forage crops highlighting the benefits observed during feedout. Although we have seen increased value and stability of silage treated with L. buchneri, there are some features that still could be improved; for instance, reducing the storage time needed to achieve the full benefits in aerobic stability. A minimum of 60 days is currently recommended.

Recently, there has been a substantial amount of research conducted on the effects of a newly-isolated lactic acid bacterium Lactobacillus hilgardii on forage preservation, particularly aerobic stability. In addition to comparing this novel strain to L. buchneri, researchers have found a remarkably positive synergistic effect when combining these two lactic acid bacteria, improving aerobic stability of silages made from different forage crops that were stored for timeframes as short as 10 and 15 days (Figure 1). Moreover, during normal lengths of ensiling (two to six months), it was observed that silages treated with the L. hilgardii and L. buchneri combination were more stable than those treated only with L. buchneri. 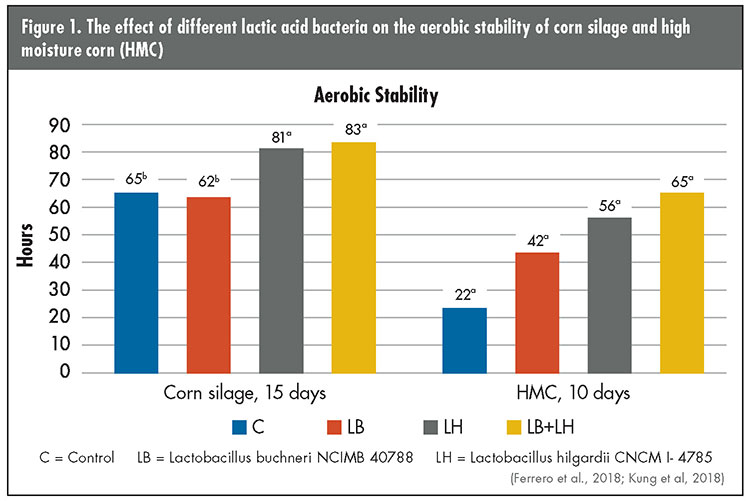 Currently, L. buchneri has also been commercially approved in Canada to preserve high moisture hay when applied at 1.2 million colony forming units per gram (CFU/g); this is a three-fold increase compared to the regular dose. Baling at higher moisture levels is a management decision due to unpredictable weather, but it also tends to reduce the extent of leaf losses, which leads to significant reductions in protein and mineral contents of hay.

A future alternative that is being developed is based on the combination of a scientifically selected strain of homolactic bacterium with a complimentary enzyme formulation. In preliminary research trials, the inoculated hay was more stable (less molding and heating than negative control and other additives) than the negative control (not inoculated), and also improved neutral detergent fiber (NDF) digestibility and a faster rate of NDF digestion. Thus, this new hay microbial additive has considerable potential to preserve and even improve the nutritive value of forages by enhancing fiber digestion, especially when the weather conditions are not favorable to baling dry hay.

As these new technologies continue to be researched and tested, remember that there are current products in the market that will continue to improve the overall quality of your feed, stabilize aerobic stability, and reduce spoilage. Also, using a research-proven microbial inoculant that meets your needs is important, but pay attention to all phases of ensiling!

Harvest the forage crop at an adequate stage of maturity and moisture level, establish the desired length of cut and degree of kernel processing, pack it tight, and seal it fast with proper covering and weights. And always remember to work safely.

This article appeared in the November 2019 issue of Hay & Forage Grower on page 16.