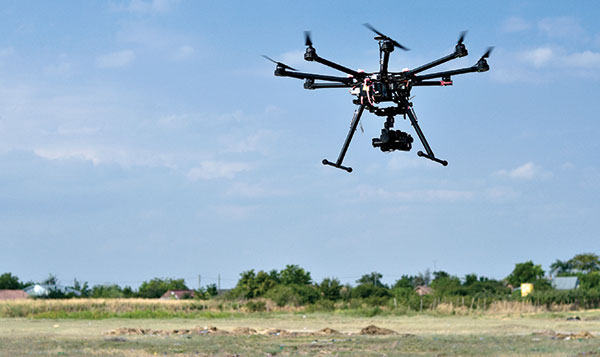 Alfalfa growers would not be happy to see a field riddled with large diseased areas as in the accompanying image. But, who would have ever imagined that a military surveillance tool — an unmanned aerial vehicle, more commonly known as a drone — could also provide disease surveillance in agricultural fields?

Alfalfa stands in the southwestern United States can become infected with a soil-borne fungal pathogen called Phymatotrichopsis omnivora. The fungus causes Phymatotrichopsis root rot, commonly referred to as cotton root rot or Texas root rot. More than 2,000 dicotyledonous plants are susceptible to this fungal disease including important agronomic crops such as cotton, alfalfa and pecans. In alfalfa, the fungus attacks roots, causing vascular discoloration and lesions, which in turn results in the formation of numerous diseased areas that are circular to irregular in shape. 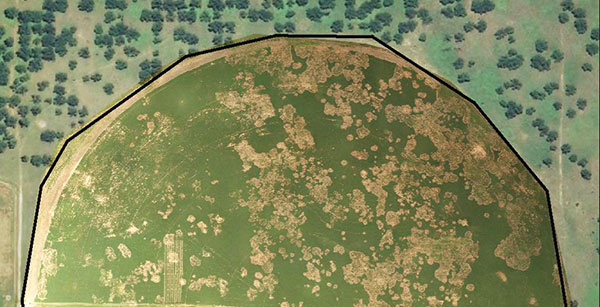 Currently, there are no known alfalfa cultivars with resistance to the disease, and limited management options may force alfalfa growers to give up on alfalfa production. Flutriafol, the active ingredient of the fungicide Topguard, is used to control this fungal disease in cotton. However, it has yet to be determined whether or not applying the fungicide to a perennial crop, such as alfalfa, will be effective.

The field in the picture shows the disease progression on a three-year-old alfalfa stand. The stand remained in production for an additional year, but the disease pressure increased and the stand was removed at the end of the 2015 growing season. The questions that growers keep asking are: How can I reduce the disease spread? When is the stand no longer profitable and ready for replanting?

Researchers at The Samuel Roberts Noble Foundation in Ardmore, Okla., and with USDA’s Southern Plains Range Research Station are working to provide answers to these questions. We are currently testing the feasibility of using drones as a monitoring tool for identifying the disease and tracking its progression at several Noble Foundation research farms in southern Oklahoma.

Currently, it’s possible to acquire images with pixels that cover just a few square inches on the ground. Drones are especially useful for these applications by making it easy and relatively inexpensive to repeatedly monitor diseased zones in the field, which allows us to see how these areas change over time.

Phymatotrichopsis root rot disease progression in the alfalfa field monitored from ground. The arrow represents the disease spread from June 2015 (marked by whiskers) through October 2015.

While this technology gives us the ability to get a good overview of the field and locate potential problem areas, growers should still determine the cause before implementing management practices. The unhealthy plants could be due to disease, some kind of stress or a combination of both, and a field inspection is still the best method to confirm what is seen from the air.

Initial research results showed the disease spread measured using drone-acquired images agree with ground-based observations, wherein the monitored diseased areas had extended 110 inches over the course of a year. Efforts are also geared toward using this information to make site-specific fungicide recommendations. More research is in progress to capture changes that occur in a plant before the disease symptoms are present, so stay tuned.

This article appeared in the February 2016 issue of Hay & Forage Grower on page 22.

Managing with and against alfalfa stem nematode Next

What does fall dormancy of alfalfa really mean? Previous