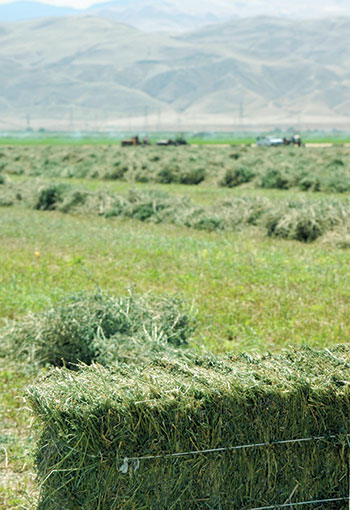 Strong foreign demand coupled with weaker domestic sales has put hay export totals in a good place during the first two months of 2016. This occurred in spite of a strong U.S. dollar.

Researchers at the University of California–Davis recently published a summary of the export situation on UC-Extension’s Alfalfa & Forage News blog. They reported that hay exports in January and February were up 25 to 35 percent from the same months last year.

The strength of the current hay export situation can largely be attributed to China, which imported a record 1.13 million tons in 2015. Total exports to China have increased fivefold since 2010 with most of the hay being alfalfa (82 percent) that is destined for Chinese dairies. The situation for other leading export countries is as follows:

South Korea: A major buyer of grass hays (about 89 percent of their total), Korean imports grew by 17 percent for all hay and 13 percent for alfalfa from 2014 to 2015.

Japan: Though still the largest market for hay exports, Japan’s purchases have declined 21 percent below what they were in 2006. The country imports 61 percent grass hay.

United Arab Emirates: Exports to the UAE declined 24 percent from 2014 to 2015, though 10 years ago their import total was near zero. The rise of the UAE as an export destination coincides with the kingdom’s limit on domestic alfalfa production in an effort to conserve water. There was a trend for higher exports to UAE during the end of 2015 and beginning of 2016.

Saudi Arabia: Water issues in Saudi Arabia have also led to a government-imposed reduction on alfalfa and wheat production in the country. This has brought Saudi Arabia into the fold as an emerging export market. From 2014 to 2015, exports of alfalfa hay rose from 21 to 73 metric tons. The extent of future exports is still somewhat uncertain. Saudi companies recently have purchased land in the U.S. and other countries for hay production that will be exported back to the country. Other countries are also exporting hay to Saudi Arabia, some of which are better positioned than the U.S.

Only about 4 percent of U.S. alfalfa production and 3 percent of grass hay production is exported; however, those percentages rise to 12.6 percent for alfalfa and 45 percent for grass hay when only the seven western states are considered. The percentages are even higher in certain areas of the West such as the Columbia Basin in Washington/Oregon and the southern valleys of California.

Though domestic use of hay still accounts for the majority of use, export markets remain important as a means to move inventory during periods of low hay prices. Like domestic dairies, exporters are primarily interested in high-quality forage, which influences the premium being paid for top-end product.