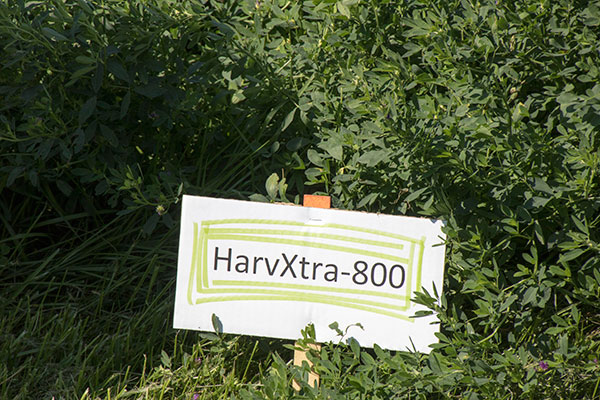 Alfalfa enhanced with the transgenic, reduced-lignin trait being marketed as HarvXtra was made available in limited supplies for spring 2016 planting. In 2017, at least 10 seed marketers will offer HarvXtra varieties in their variety lineups.

Though this current year saw a number of new seedings established with HarvXtra seed, there were a few select alfalfa growers who had the opportunity to plant the traited seed in 2015. This gave them the opportunity to manage and harvest first-production year fields in 2016. Recently, I talked to two of the early adopters to get their first impressions and see how they planned to manage the crop.

“We found HarvXtra yielded as well as our conventional varieties and standability wasn’t a big problem,” said Donnie Martin, a Chambersburg, Pa., dairy farmer who milks 200 cows on his 800-acre farm.

Martin seeded 14 acres of HarvXtra alfalfa in 2015 and followed that up with 23 more acres in 2016. The traited alfalfa is stored in a separate bunker from his conventional fields. He plans to seed more acres to HarvXtra in 2017.

Mike Brunmeier, a Newton, Wis., dairy producer, was another of the HarvXtra class of 2015. He split a 35-acre field between the reduced-lignin and a conventional variety. Another 50 acres were seeded to HarvXtra in 2016 on his 425-cow dairy. Brunmeier annually harvests nearly 350 acres of alfalfa while farming a total of 700 acres.

Both Martin and Brunmeier cut their 2015-seeded stands at the same time as their conventional alfalfa fields in 2016.

When asked about harvest strategy, Martin stated, “At first the idea of eliminating one cutting per year sounded appealing. For now we’re keeping everything on our normal five-cut, 28-day cutting schedule. We’ll see if that strategy changes in the future when all the fields are reduced lignin.”

Brunmeier said that he would also continue with his normal cutting regime. “Initially, skipping a cut seemed like a good approach, but I think we’ll continue to use it as an insurance policy against bad weather or take the higher quality with our normal cutting schedule.”

Both early adopters seemed pleased with their first year of harvesting and feeding the traited alfalfa. The limited quantities of feed from the initial seeding year were fed out on both farms by substituting the HarvXtra alfalfa for their conventional alfalfa. It was fed until it was gone and then the cows went back to conventional varieties.

Brunmeier related a similar story, but had his 2015 HarvXtra crop layered in an upright silo. He used plastic markers as the feed was being ensiled so he could tell when they were into the reduced-lignin feed.

“The bulk tank milk pounds went up when we got into the HarvXtra and dropped when we got out of it,” Brunmeier said of his 2015 short-duration feeding experience.

Based on several comparisons of his HarvXtra and conventional fields, Brunmeier was getting a 9 to 20 percent bump in NDF digestibility.

Brunmeier got firsthand experience in 2016 on what happens when first cutting is delayed by persistent rain. “We were about 10 days late making first cut. In fact, the field was flowering,” he said. “The HarvXtra came back at 130 RFQ (relative forage quality). I was disappointed, but then I saw the results of a conventional variety that we cut a day later and it had a RFQ of 88.”

Like Martin, Brunmeier didn’t notice that lodging was any better or any worse with the reduced-lignin variety compared to his conventional alfalfa.

HarvXtra comes stacked with the Roundup Ready trait. Both dairy producers felt the added technology fees were worth the investment when considering it is spread out over the stand life and harvested tons; further, they felt the additional milk production made it a worthwhile investment. Each stated that their goal was to seed and harvest 100 percent of the traited, reduced-lignin alfalfa in the future.

It’s too early to surmise if everyone who tries HarvXtra-traited varieties will have the same experiences as these two dairy producers. Next year, there will be many more first-production year fields harvested and fed and we’ll know a lot more than we do today. Further, multiple university trials are currently being conducted that will provide needed information.

As was the case with Roundup Ready varieties when they hit the market, we know that there will be differences in agronomic performance among the various HarvXtra-traited varieties that are ultimately marketed. It’s also true that future generations of HarvXtra varieties will be better than today’s initial offerings.

Based on the limited independent research and farm experience to date, what we do know is that HarvXtra delivers in terms of comparative forage quality — a 10 to 15 percent reduction in lignin and improved NDF digestibility. How most farmers ultimately decide to manage the trait remains to be seen.

Is an alfalfa futures contract in your future? Previous