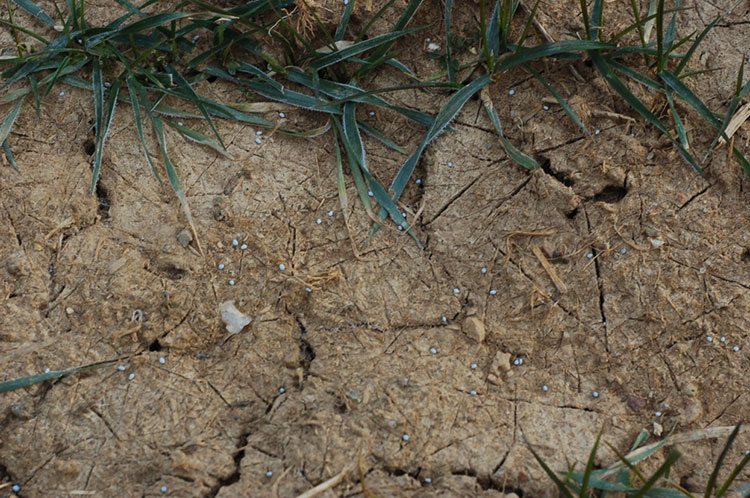 Frost-seeding is one form of over-seeding, in which you can use legumes to economically and quickly thicken a pasture or a perennial hayfield in late winter. Though no-till drilling has more guarantee of success, frost seeding is an easy operation while you have time in the off season, and if managed correctly and timed properly, has good likelihood of success. Spraying, tillage, and lost grazing time does not factor into the costs as it typically does with a pasture reseeding. Clover eventually contributes to grass yield in a pasture by fixing nitrogen (if it is at least 30 percent of the stand), and many legumes can help offset the summer slump that grasses experience (as well as boost the nutritional value of the forage). Red clover has the potential to increase forage yields by 30%, and protein levels by 3-5%. It is more agronomically adaptable, and more palatable as a feed than alfalfa. Plus it’s more reliably a fast starter than alfalfa and germinates more consistently in cool temperatures.

There are two scenarios in which frost-seeding is appropriate:

a) A pasture or hayfield is thinning and more legumes are desired. There is plenty of exposed soil and the existing stand was ideally shocked back with a close grazing or mowing in the late fall (down to about 2 inches). Shocking the stand removes both the thatch that acts as a barrier to the soil surface, and depletes the root energy reserves that help with prompt regrowth.

b) A field with a fall-planted small grain (grown for grain, not forage), in which a legume cover crop and/or hay crop is desired immediately following the grain crop. A later-planted small grain that has not canopied and shows exposed soil between the rows is ideal.

In either case, you are establishing a crop in an existing crop so you need to make sure:

1. There is little competition from the existing stand and plenty of exposed soil (free from both residues and existing stand). In a pasture or hayfield scenario, if some bare ground is exposed but you are unsure if it’s enough, you can open up the stand a little bit with a chain drag, light vertical tillage, an aerator, or a light disking. If you’ve chosen to suppress the existing stand with overgrazing, turning the area into a sacrifice lot can make sense. To reduce competition from the existing grasses, avoid fertilizing with nitrogen at the time of frost seeding or at spring green up. Even a thin grass stand will become surprisingly competitive with the establishing seedlings once they start greening up. Bunch grasses like orchardgrass often leave more exposed soil than sod-forming species such as bluegrass.

2. Weather conditions are right: ground is frozen solid in the morning to drive or walk over while broadcasting, and thaws in the afternoon. The expansion and contraction of these daily temperature fluctuations, as well as eventual spring rains, causes “honeycomb” openings that works seed into the ground and creates the seed to soil contact necessary for germination. Clay and loam soils tend to experience more of this shrinking and swelling than sandy soils. This makes sense, since clay types hold more moisture, the component in soil responsible for expansion with freezing. Avoid frost seeding onto a thick layer of snow, since rapid snowmelt can wash away seeds.

3. Soil conditions are hospitable to new seedlings, including drainage, pH, and nutrient content. However, soils with a high N content, such as well-manured pastures, are not as ideal, as the extra fertility will cause the grass to become overly competitive. If your soil test shows a need for more nutrients (other than N) you can apply these in late April or early May.

4. The added species are appropriate. Red clover is often recommended for frost seeding because of its small round seed size, excellent seedling vigor and shade tolerance, allowing it to thrive for a time under the canopy of grass or small grain. It tolerates a range of conditions, including pH, fertility, drainage, and drought. White clover is acceptable as well, though red clover is ideal for grazing or haylage-only systems as it provides better yields. King’s AgriSeeds’ clover blend works very nicely in a pasture or small grain setting, and establishes greater diversity.

Alfalfas and grasses are often not as successfully frost-seeded, because the seed is larger and doesn’t work through as easily into the soil surface. If you do use grasses with other species, keep in mind that because of varying size and density, each species will have a different reach when broadcast. Additionally, if you decide to try alfalfa, don’t seed it into existing alfalfa (because of autotoxicity concerns). Grasses that have worked occasionally for frost seeding are the small seeded ryegrass or hulled orchard grass.

Some clover species are also not appropriate for pastures and/or this early-season time frame. Mammoth Red Clover, for example, doesn’t fit in a perennial pasture or hayfield that going to be cut or grazed on a regular basis. If seeded in the fall, Mammoth will give us one big cutting the second year (after it overwinters). If seeded in the spring, it will give us one big cutting later in the season of the first year.

This could potentially be frost seeded for a "one time cut scenario" if it were the only legume seeded in a small grain, where the clover would be harvested after the fall grain harvest. It may also work better planted with spring oats then left to grow after oat grain harvest for one big cut later in the year. But it doesn't fit in well with other perennial clovers and grasses that are getting grazed or cut on approximately a 25-30 day basis.

Crimson clover is also not as suitable, as it is a winter annual (not a perennial for multiple cuts or grazings) and does best when fall planted and vernalized. (The seed is also too large for optimal frost seeding.)

5. Legumes are properly inoculated with the correct strain of Rhizobium bacteria, for optimal nitrogen fixation.

6. The broadcast seeder is correctly calibrated. Red clover should be spun on at 3-4 lbs/A if frost-seeded every year, and 6-8 lbs/A if every other year or a first-time seeding. White or ladino clovers go in at 1-2 lbs/A, and are longer lasting, so they won’t need an annual reseeding

7. Post-seeding management is sound. Treat the new seeding as you would any new and fragile stand. Your newly seeded clover won’t yield substantially until early summer (it might take even longer to take off if you get an exceptionally dry spring). If you frost-seeded a hayfield, take a timely first cutting to open up the stand for the clover to take off. Keep harvest height above 3 inches. In a pasture, closely managed rotational grazing is the best thing for letting sunlight through to the new seedling.

In the small grain scenario, a few weeks after grain harvest, the clover hay can be cut as “stubble hay,” incorporating some of the small grain straw to add effective fiber to the rich clover. Alternatively, the clover can be left as a cover crop over the summer for nitrogen credits and sprayed or plowed under for a late summer planting, or left over winter for a spring planting the following year.

Keep in mind –if you are frost-seeding solely because of poor grass or legume growth, you will need to determine why this is happening before putting down more seeds. Test for soil nutrient deficiencies and pH, since these will need to be corrected before any seeding can have success.