Producers within the Fescue Belt struggle with depressed performance of their cattle. The fungus produced by an endophyte in Kentucky 31 fescue costs the industry an estimated $1 billion annually. Interseeding clovers boosts pasture quality and can dilute the impact of grazing KY-31. The two current recommended methods of establishing legumes, such as clover, into permanent pasture are no-till drilling or broadcasting.

Unfortunately, it can be costly to rent a no-till drill or large-scale broadcaster. Additionally, difficult topography can make it impossible to get large equipment over pastures. Some producers have turned to a method of seeding that is utilized in nature: feeding clover seed to cattle. By placing seed in a concentrate supplement or loose mineral, the hope is that it passes through the animal and establishes in pasture. Some producers have even suggested that coated seed (covered with inoculant and limestone) established better than uncoated seed.

This method of establishment is often seen in nature, particularly in the case of weeds and trees. Producers observed this dispersal method and have mimicked it in an attempt to easily establish desirable species. Although this practice has been used by farmers for many generations, its efficacy had not been studied in the field. Researchers from North Carolina State University attending an Amazing Grazing workshop were inspired by the innovation of the producers who were insistent that it worked, so the practice was investigated to determine if feeding seed to cattle was a viable option to establishing clover by frost seeding (broadcasting midwinter or spring). 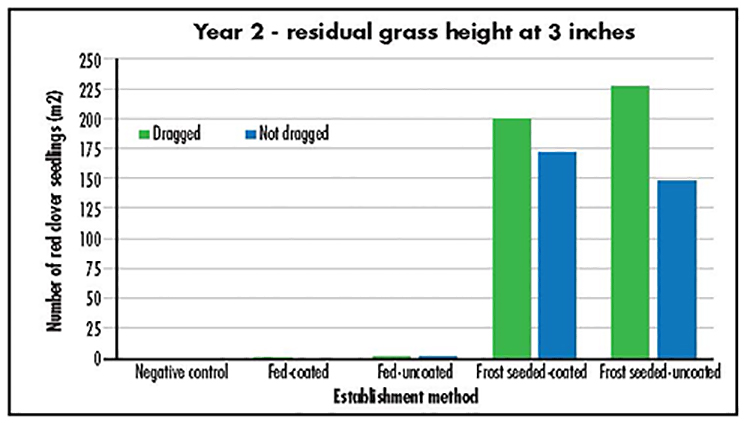 When evaluating the seed-feeding method, it became clear that there were several factors that had potential to reduce seed viability. Contact with loose mineral, passage through the ruminant digestive system, as well as the competition with feces after passage were just a few constraints identified. Each of these factors was studied individually to quantify its impact on seed viability, along with a “big picture” study that determined what results producers should expect in full-scale pastures from this method of seeding.

It was suspected that contact with the mineral would reduce seed viability over time due to the high salt content. Germination of the seeds was measured after 2, 7, 14, 28, and 56 days of contact. After 14 days, coated seeds had a significant reduction in viability to only 70 percent viable and all seeds died after 28 days of contact, whereas uncoated seeds remained completely viable until 28 days of contact. It is suspected that the coating, which holds moisture, negatively impacted the seeds in contact with mineral. By holding moisture close to the seed, which likely contained salts from the mineral, it decreased the time needed for the salts to kill the seed.

The ruminant digestive tract is a very intense system that contains microorganisms capable of digesting fiber, rapid changes in pH, high temperatures, the grinding pressure of ruminal contractions, and repeated opportunity for chewing during rumination. To study the impact of passage through the digestive system on seed viability, fecal samples were taken from cattle consuming mineral containing either coated or uncoated seeds.

That small percentage of seed that survived passage through the ruminant digestive system had yet another barrier to face after passage: competition with fecal pats and established grasses in the pasture. The impact of feces on seed germination and establishment was tested in a small plot study. This study sought to measure the impact of competition after passage alone; therefore, seeds were not fed to cattle prior to being added to feces. This gave us the chance to observe how seeds performed in a best-case scenario.

We found that the ability of seeds to establish in fecal pats was dependent on the dragging of the feces. Dragging is a common practice utilized by producers to spread feces throughout the pasture, primarily to reduce fouling and to distribute nutrients more evenly. This method was also successful to enhance seedling establishment. Without dragging, few seeds were able to establish. This shows just how much an undisturbed fecal pat can interfere with establishment of the seeds that survive passage.

After combining all of these factors, the overall efficacy of establishment of red clover after feeding seeds was compared to frost seeding. Cattle grazed across 16 acres and were consuming seed mixed in with the mineral, which we called the “fed” pastures. When the soil was freezing at night and thawed during the day, plots were frost seeded with red clover. 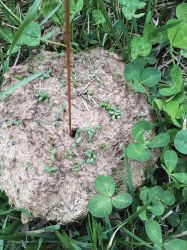 Red clover seedlings emerge from a cow patty two weeks after being consumed. Two weeks later, the seedlings struggled to live.
The number of red clover seedlings per square foot that established in the frost-seeded treatments was about 20 for both coated and uncoated seeds. However, in the fed pastures, less than one clover seedling per square foot was established. The reduced viability after passage through the ruminant digestive tract along with the competition of fecal pats and their uneven distribution all reduce the success of this approach.

Producers who are looking to interseed clover should utilize frost seeding and not depend on the less effective seed-feeding technique.

Frost seeding can be easily done in late winter or early spring. Ideal conditions for broadcasting are when soil temperatures are freezing at night and thawing during the day. Using 2 to 3 pounds of white clover or 8 to 10 pounds of red clover, broadcast the seeds across closely grazed or mowed pastures. The target height of the pasture should be about 1.5 inches.

Our study showed that if the residual height of the grasses is higher than 3 inches, dragging the pasture after broadcasting the seed will improve seed to soil contact and, therefore, improve clover seed germination and establishment (see graph). When frost seeding, be sure to inoculate clover seed, particularly if seeding into soils that have been recently logged, have been in corn production for more than 10 years, or have not had legumes for a decade or more. 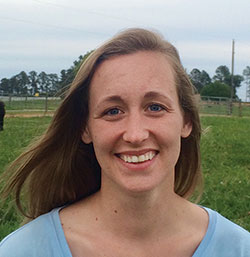 This article appeared in the January 2017 issue of Hay & Forage Grower on page 14.

Use a simple approach if grazing cover crops Next

Grazing with an ecological focus Previous