All-hay and alfalfa January hay price averages were slightly lower in USDA’s most recent Agricultural Prices report released last week. The all-hay price was $124 per ton, down $2 per ton from the previous month and $10 lower than January 2016. Hay other than alfalfa dropped $1 per ton from $120 to $119 per ton, $5 per ton below January 2016.

The month-to-month alfalfa price dropped by $1 in January to $128 per ton, which is $13 per ton less than one year ago. It’s also the lowest average monthly price since January 2011 when alfalfa hay averaged $121 per ton. 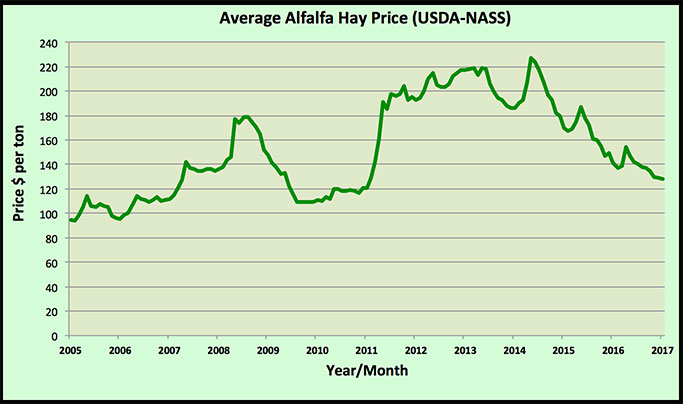 After leading as a price gainer last month, New York posted the largest January price decline of minus $25 per ton. Ohio followed with a price swing of minus $20. Texas and Wisconsin also lost ground with price declines of over $10 per ton.

North Dakota and Oregon had the largest price gain at plus $15 per ton for each state. California posted a price $10 per ton higher than December.

For 2017, the U.S. average alfalfa hay price will start the year $13 per ton lower than January 2016 and $42 per ton behind January 2015. Though livestock producers might welcome further reductions, another year of falling prices will most surely drive commercial hay producers to seek alternative, higher revenue crop enterprises where other options exist. Stay tuned. 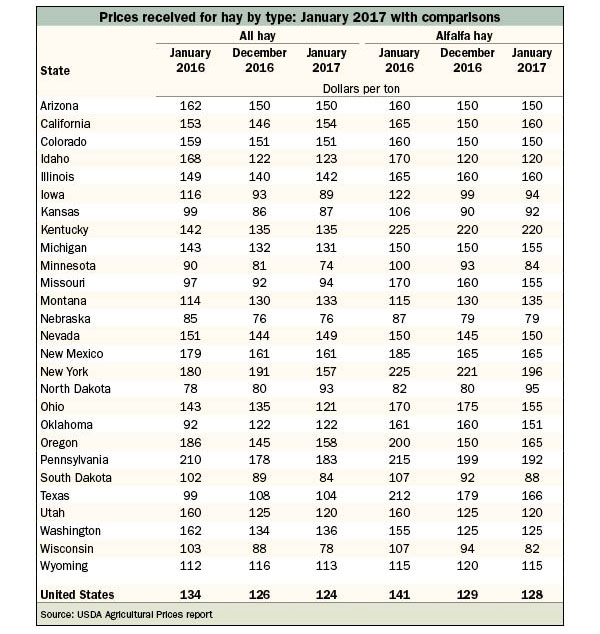