When frost and grazing don’t mix 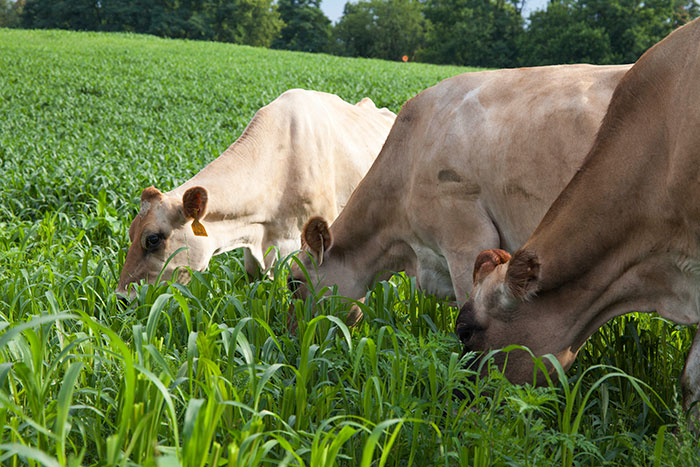 A relatively mild fall in the Midwest looks like it may turn more normal with near or freezing temperatures during the stretch run of October.

“As cold weather approaches, livestock producers need to keep in mind that several forage species can be extremely toxic soon after a frost because they contain compounds called cyanogenic glucosides,” says Mark Sulc, in a recent Ohio Beef Cattle Letter. Sulc, a forage specialist with Ohio State University Extension, notes that these compounds can be quickly converted to prussic acid (hydrogen cyanide) in freeze-damaged plant tissues.

Plants in the sorghum family are of greatest concern for prussic acid poisoning, especially those growing in soils with high nitrogen levels or where phosphorus or potassium are deficient.

“After frost damage, cyanide levels will likely be higher in fresh forage as compared with silage or hay,” Sulc says. “This is because cyanide is a gas and dissipates as the forage is wilted and dried for making silage or dry hay,” he adds.

Cyanide levels elevate in frost-damaged tissue but are especially high in young, rapidly growing plants and tillers. Sulc notes that the new growth of sorghum species following a nonkilling frost is dangerously high in cyanide. Indiangrass, a perennial warm-season species, is also a threat if plants less than 8 inches tall are grazed.

Animals can die within minutes if they consume forage with high concentrations of prussic acid, a compound that interferes with oxygen transfer in the blood.

The forage specialist offers this list of recommendations for producers who need to manage their sorghum species around a frost:

1. Do not graze on nights when frost is likely. High levels of toxic compounds are produced within hours after a frost, even if it was a light frost.

2. Do not graze after a killing frost until plants are dry, which usually takes five to seven days.

3. After a nonkilling frost, do not allow animals to graze for two weeks because the plants usually contain high concentrations of toxic compounds.

4. New growth may appear at the base of the plant after a nonkilling frost. If this occurs, wait for a killing freeze, then delay another 10 to 14 days before grazing the new growth.

5. Don’t allow hungry or stressed animals to graze young growth of species with prussic acid potential. To reduce the risk, feed ground cereal grains to animals before turning them out to graze.

6. Use heavy stocking rates (four to six head of cattle per acre) and rotationally graze to reduce the risk of animals selectively grazing the more toxic leaves.

7. Never graze immature growth or short regrowth following a harvest or grazing (at any time of the year). Graze or greenchop sudangrass only after it is 15 to 18 inches tall. Sorghum-sudangrass should be 24 to 30 inches tall before grazing.

8. Do not graze wilted plants or plants with young tillers.

Finally, Sulc also notes that forage legumes such as alfalfa and clovers have a higher risk of causing bloat when grazed one or two days after a hard frost. He suggests waiting a few days after a killing frost before grazing pure legume stands. Feeding dry hay along with legume-rich pasture is also effective.

Another strategy that Sulc offers is to cut a high-risk legume pasture and then let the animals consume the dried forage in the swath.

There’s a reason for yellow winter pastures Next