By Ann Behling
The author is an agricultural writer based in Northfield, Minn.

Andy Stock believes many farmers could do a better job of planning the long-term future of their businesses.

“Take time to carefully plan and openly communicate your estate plans to your heirs,” Stock said. “Surround yourself with good people, such as a wise accountant, lawyer, and financial adviser, to help guide you through the process, and tell the next generation what your intentions are for passing the business down.”

Stock, the owner of Stock Hay & Grain, was fortunate that, before his parents died unexpectedly in 2006, they laid out a plan that enabled their children to keep the farm in the family. Andy was 27 years old then and farming with his dad. Wayne and Sharmon Stock were murdered in their home on Easter Sunday that year.

The homicides of the well-liked and prosperous couple shocked the small community of Murdock, Neb., 40 miles southwest of Omaha. Two Wisconsin teenagers pleaded guilty to killing the couple and were given life sentences. 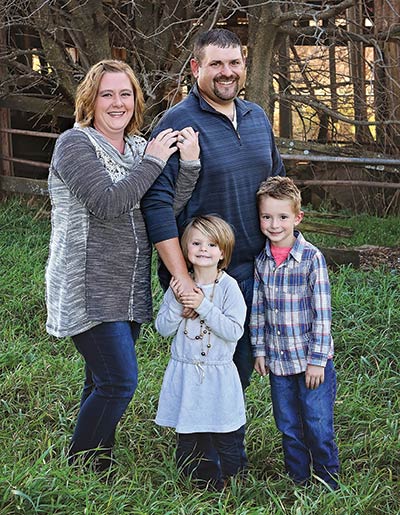 “Take time to openly communicate your estate plans to heirs,” advised Andy Stock. Pictured here are Cassy (wife) and Andy along with their children Hailey and Elliott.

Of his parents, Stock said, “We enjoyed each other’s company, and I admired them very much. I enjoyed working with my dad on the farm, and his goal was always to teach me something.”

He remembered a time in his early 20s when he and his dad were doing paperwork and he wanted to hurry up and get the bookkeeping tasks done so he could go out with his friends. “Dad looked at me and said, ‘You’re going to sit here and learn this because someday I’m not going to be around to help you.’”

Stock recalled his dad as an excellent mentor and a patient man. “I know of some operations where the dads don’t want to give up control of anything to the next generation, even though their adult children might be in their 40s or 50s,” he said.

Fortunately, that wasn’t the case for Stock and his dad. “In my early to mid-20s, my dad told me I needed to make some decisions, including some tough ones. He gave me a few pieces of ground to farm and said, ‘I’ll be here to help, but you’re going to learn how to manage and make decisions.’ Looking back, that was a huge benefit that a lot of young farmers don’t get.”

Ironically, a few months before his dad’s death, Stock asked his dad if he had a transition plan in place. The younger Stock was prompted to ask the question because of a weekend seminar he had recently attended through the Nebraska LEAD Program. Offered by the University of Nebraska-Lincoln, the two-year program teaches Nebraskans to advocate for agriculture through seminars on policy, marketing, economics, and technology.

At that time, the elder Stock said he had a will but added that he should look at updating it. “That was the last time we talked about it,” Stock recalled. “A few months later, he was gone.”

After the tragedy, Andy, along with his sister, Tammy Vance, and brother, Steve, were committed to continuing their parents’ legacy of farming. Then, as now, the farm consists of 1,300 acres of nonirrigated alfalfa, alfalfa-grass mixtures, corn, and soybeans. The acres, which are a combination of owned and rented, are split evenly between the two-row crops and forages.

Following the instructions of their parents’ will, which was written when Andy was 5 years old, all assets were put into a trust and were to be divided evenly between the three siblings once Andy turned 30 years old. Control of the farm was given to a local attorney and banker, whom the elder Stocks trusted very much.

“At first I thought that arrangement was going to be awful,” he recalled. “But in hindsight, it was perfect because it took a lot of the business decisions that needed to be made off my shoulders. I was the operator, and they ran the business. The way my parents set things up also gave me time to grieve. My mom and dad had a plan, and it worked the way it was designed to work.”

Stock also credited a very supportive family, network of friends, and the community for helping him to make it through those first few years. “My brother-in-law, John Vance, was a tremendous help. He worked for the phone company at night and then came out and helped me during the day and on weekends. Several men in the community became mentors to me. In those early days, I asked a lot of questions.”

After the trust expired, Andy and his siblings were free to do as they wished with the farm. With the support of his brother and sister, Stock and his wife, Cassy, were committed to owning and operating it. The young couple also knew it was a great place to raise their son, Elliott, and daughter, Hailey.

“Not farming was never an option for us, and we were going to do our best to make it work,” Stock said. “My siblings gave us full control and told us to manage it the way we wanted to.”

Over time, the Stock children negotiated a price for the farmland, buildings, and machinery via several meetings. They hired a consultant to aid the negotiations and to keep things amicable.

Stock’s brother and sister requested a fair price for the business, but not 100 percent of market value. “There’s no way I would be farming if that’s what they had asked for,” he said. “Thankfully, my brother and sister were willing to participate and work with me. The continuation of the farm and my parents’ legacy was more important to them than money. I’m grateful for the opportunity they’ve given me.”

Another benefit of those friendly negotiations: “Our relationships have remained excellent, and we happily gather for holiday meals and other celebrations.”

Healthy crop prices from 2006 to 2015 helped Stock, too. “Things might look a whole lot different if I’d bought the farm within the past two years,” he noted.

Stock puts up dairy-quality hay in 3- by 4- by 8-foot bales and ships it to customers in Indiana, Ohio, Mississippi, and Wisconsin. Much of it is delivered to customers as needed. He shoots for a relative feed value (RFV) of 150 to 200, depending on which customer it’s going to.

“A lot of the dairy producers I work with don’t require quite as high of test numbers as they used to, and they don’t request relative forage quality (RFQ) numbers,” Stock said.

Some of his dairy clients also buy his lower-quality hay for dry cows and heifers. The balance is sold in round bales to local beef producers.

He usually takes his first cutting around May 10 and cuts four more times at about 24-day intervals. “I don’t go by the calendar as much as I do crop conditions,” Stock explained. “If I’ve got buds coming on at 20 days, I’ll cut. Sometimes it takes 30 days to get to bud stage.”

His yields average 5 tons per acre, and repeat customers buy around 90 percent of his production each year. “Just about everything I produce is already sold as it’s coming off the field,” Stock said.

In 2017, a long-time customer called Stock to tell him he had just sold his dairy herd and retired. “Fortunately, I had other customers to call on — some who had only bought a load or two in the past — and I was able to move more hay to them.”

The alfalfa producer keeps detailed records and knows on a weekly basis which customer(s) need hay. “I try to make purchasing it as easy as I can for them,” Stock said.

He also likes to share his experiences with others regarding estate planning. “A lot of people don’t want to talk about it, and older farmers put it off and put it off. But it is so important to have a plan and to communicate your wishes to the next generation.”

Stock recommends securing good advisers whom you trust. “My dad surrounded himself with a lot of good people to work with. I still work with most of them today.”

This article appeared in the February 2018 issue of Hay & Forage Grower on pages 14 and 15.