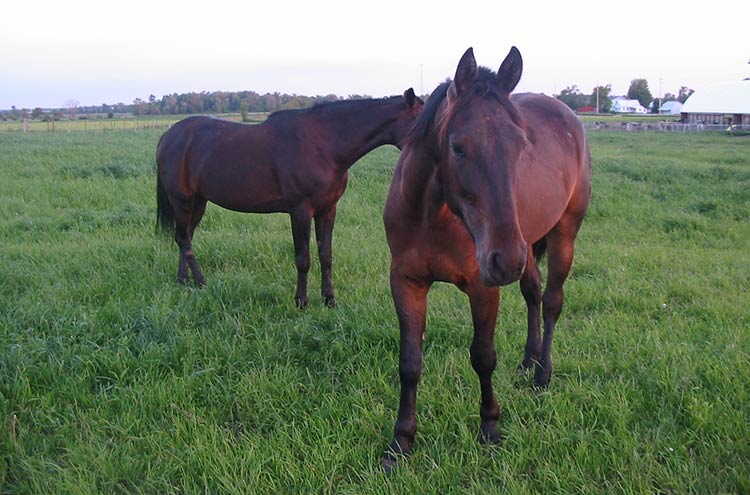 Horses have different digestive systems and nutritional needs than high-producing ruminants like sheep or cattle, which gives them some unique sensitivities to various forage issues. Horses and other livestock tend to avoid plants that don’t agree with them because they find them unpalatable, unless they lack other feed options (such as in an overgrazed pasture). Another general rule is that forages that cause problems for other livestock are likely to cause problems in horses, as well. It’s great to give horses access to a variety of high energy, protein-rich forages in the form of pasture and hay, especially if they are performance horses. High performance horses really do need the high quality forage you would feed to your production animals, while a horse that is not being worked should be given lower quality feed to avoid problems with weight, blood sugar, etc. Pasture mixes formulated for horses are often designed for lower energy levels.
There are a few forage situations that you continually have to watch out for, regardless of the type of horse you are working with.
Nitrates: High nitrate concentrations in forages can be toxic to animals, and are often found in young, rapidly growing plants, those that have had more N fertilization than they need, and plants that are stressed, for example by a drought. All grasses can accumulate nitrates, including millet, which is generally considered a safe option for summer horse pasture since it lacks prussic acid, so testing for nitrates in grass-based feed is recommended. Watch out for nitrate accumulators in the weed family as well, including lambsquarter, redroot pigweed, curly dock, and johnsongrass (a weed in the sorghum family that should never be grazed by horses). Since these plants are luxury consumers of nitrogen, uptaking more than they can covert to protein leaves the byproduct nitrate in the tissues. Nitrate in the plant is converted to nitrite in the animal’s digestive tract, which is absorbed into blood and may convert hemoglobin into methemoglobin. This prevents the release of oxygen to the tissues, causing breathing problems and anxiety in the animal.
Ruminant animals such as cattle and sheep are several times more susceptible to nitrate poisoning than horses, since the rumen is responsible for converting nitrate to nitrite. This same reaction takes place in the horse’s cecum (hindgut) but to a lesser extent.
Symptoms of nitrate poisoning in horses include difficulty breathing, bluish-colored mucus membranes, weakness, tremors, and death. Horses can also present symptoms of a chronic, subacute condition that may be more difficult for the vet to resolve, including anxiety, work intolerance, depression, muscle issues or poor appetite. The maximum acceptable level of nitrates for adult horses is 0.5%. The N:S ratio should be no greater than 10:1. It’s a good idea to test any hay or haylage that returns a protein content greater than 12 percent, and any feed to be fed to pregnant mares.
One antidote to nitrate poisoning is iodized salt. The best thing you can do to prevent high plant nitrates is avoid overfertilizing – stick to an amount equal to 1 lb of N/day of growth, and avoid fertilizing during or after a drought. A high application of N, P, and K without balancing other minerals and sulfur can give you a high forage yield but a toxic level of nitrates. Test your forages. A high protein level in feeds can indicate nitrate toxicity; so can a high ratio between N and S.
Sorghums: The sorghum family includes sudangrass, sorghum-sudan, johnsongrass, hybrid forage sorghums, and grain sorghum, and all of these contain cyanogenic glycosides, but the concentration varies among species and varieties. Avoid feeding horses crops from the sorghum family in all circumstances. In the green growth stage, these crops can cause cystitis syndrome, a urinary tract disease. This is a risk not only after a frost, but remains an ever-present threat for horses, and is associated with the low levels of cyanide/prussic acid in the plant tissue. Mares fed sorghum crops can abort, and foals can be born with contracted tendons. In the event of consumption after a frost, the high levels of prussic acid can cause muscle weakness, urinary tract failure, neural degeneration, and death.
Endophyte-infected fescue: This goes without saying for many producers, but stay away from toxic fescue for all livestock. Effects will include fescue foot, summer slump and fat necrosis. In mares, the symptoms to watch out for include reproductive loss, abortion, agalactia (lack of milk), and prolonged gestation. Ergovaline, the toxic alkaloid in the endophyte, has a vasoconstrictive effect on blood vessels, with negative consequences for many bodily systems. Endophyte-free tall fescue is fine to feed horses.
Clovers: Clover can be a vital part of the horse diet, providing energy, protein and fiber. They can cause health problems for horses, but many of these problems stem from molds that infect improperly dried clover hay. The health effects of these molds can include slobbers, photosensitivity, and bleeding. In very wet years or high-humidity conditions, it’s a good idea to keep horses out of clover-rich pastures. You can increase air movement of these stands with mowing, thinning clover, and improving drainage. Prime conditions for molds include temperatures above 80 degrees F and humidity above 60%. The primary culprits include Rhizoctonia leguminicola, a rust-colored fungus on the upper side of the leaf that causes slobber in horses, and Cymodothea trifolii, black blotches on the underside of clover leaves close to the ground, which causes photosensitivity in the horse.
Less common, white and yellow sweetclover can be present in older hay fields and along roads. Sweetclovers harvested for hay can develop unknown molds that convert naturally occurring cumarol in sweetclover to dicumerol, a blood-thinning agent. Horses may develop bleeding problems if moldy sweetclover hay is a large part of their diet over several days. Crimping sweetclover hay at cutting can aid drying and help reduce molding.

Alsike Clover – Alsike clover is often seen as a go-to legume option for poorly drained, heavy, or acidic soils. It is toxic to horses, however, and should not make up more than 5% of the feed. Toxins in alsike clover include salicylic acid and glucosides. Poisoning also likely results from a fungus hosted by the clover that creates a mycotoxin and accumulates this toxin under certain growing conditions. Photosensitivity and liver damage are the major dangers to horses. “Big liver syndrome” can be a long-term consequence of alsike consumption.
Alfalfas and Blister Beetle Infestation- Blister beetle infestation is usually associated with alfalfa hay. The beetles contain cantharidin, a toxin that irritates the lining of the horse’s digestive tract. No level of consumption is considered safe, and the striped male beetles are the most toxic. Blister beetle infestations are mostly confined to southeastern states.
Molds – Horses are extremely susceptible to molds and fungal toxins. Most problems with horses are a result of feeding hay laden with dust and molds. Hay that was baled at high moistures (greater than 20 percent) is at higher risk for these molds. This can be a particular problem during the first cutting, a time when rain is frequent and optimal drying conditions are harder to come by. Be aware that red clover that is not bred for hairlessness is among the most difficult hay species to dry properly.

Wild poisonous plants – Poisonous weeds can sneak up in pastures, and it’s important to know how to identify them. Ornamental shrubs and nightshade are among the most common in the Northeast. Most of these aren’t palatable, however, and horses will avoid them if given a choice. Sound pasture management can help eradicate most weeds, including problem plants – clipping, using the right stocking rate, and rotating pastures on time, before they get overgrazed. Soil testing and balancing fertility helps get the balance of plants right, too.