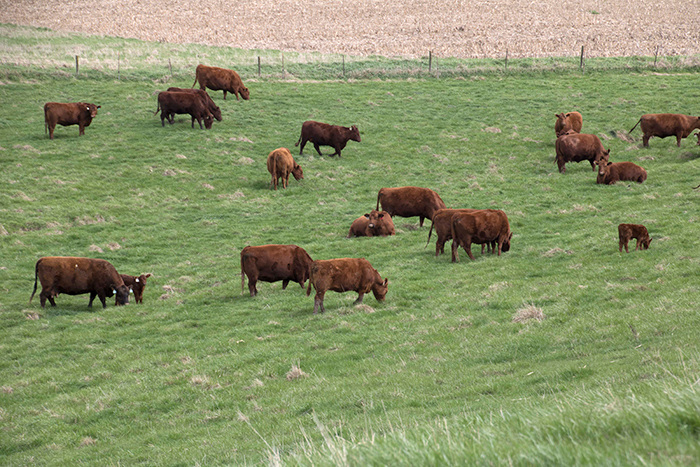 “Springtime brings the growth of new spring grasses, but it also offers a higher risk for grass tetany,” says Lew Strickland, extension veterinarian with the University of Tennessee (UT).

In a recent post on UT’s Beef and Forage Center’s website, Strickland explains that grass tetany is a disorder in cattle when the level of magnesium in the cerebrospinal fluid, which surrounds the brain and spinal cord, decreases below a critical level.

Simply put, this malady is caused when the blood’s magnesium drops before the magnesium in the cerebrospinal fluid. This can be caused in a number of ways, but tetany is always due to low magnesium levels. Strickland notes that in cows with calves and late in pregnancy, these low magnesium levels often accompany low blood calcium levels. He explains that in these cases, the muscles cannot function correctly, causing the cow to suffocate and die.

A range of factors determine susceptibility, including grazing on acid soils, high-potassium soils, or soils recently treated with potassium fertilizers. Additionally, Strickland says that feeding cattle on grass-dominant pastures or on early spring growth contribute to the disorder. Environmental effects such as sudden temperature variations and exposure to the elements also come into play. The veterinarian notes that older cows with calves are most sensitive.

He notes that anything that reduces the legume component of pastures will also raise the risk for grass tetany. This might include spraying broadleaf weeds, which sets back species such as clovers.

Heavy doses of nitrogen or potassium to the soil reduces the plant’s ability to take up magnesium. Further, any stresses that reduce forage intake, such as poor weather, can also predispose animals to grass tetany.

“Cows can store only very small amounts of magnesium in their bones and soft tissues. They lose magnesium in milk, urine, and digestive secretions. Unless replaced, grass tetany will result,” Strickland says.

What to look for
Cases of grass tetany are characterized by foaming at the mouth and nose; this is followed by muscular spasms and death. Strickland says that in most cases, producers aren’t even aware that there is a problem until they find dead cattle, surrounded by the obvious markings of a struggle.

Often ignored, early signs include twitching of the face and ears, a stiff gait, and weary appearance, Strickland says. The next stage comes with more apparent signs and less of a chance for recovery. These cattle are excitable, often wild, bellowing, refuse to be driven, and staggering, appearing blind.

“The animal may die within minutes of being seen staggering, especially if it is driven or stressed in any way,” Strickland says. “The cow soon goes down on its side, with its legs outstretched, stiff, and thrashing backward and forward. If the animal is down, any disturbance (especially if it is touched) may start leg paddling.”

These symptoms come from a variety of factors. In addition to time of calving, stress plays a major role. Sudden changes in feed or feed quality, lowering of temperature, exposure to the elements, and transport close to calving are common stressors, Strickland explains.

“As explained earlier, grass tetany may not always arise from a simple deficiency of magnesium. Straight magnesium supplements are therefore sometimes ineffective as a sole treatment,” Strickland says.

He explains that veterinarians typically inject calcium and magnesium intravenously, followed by a subcutaneous injection of magnesium. When injecting into the vein, caution must be taken with the dosage and speed of injection to prevent killing the cow.

Grass tetany is a very real concern in grass-dominated, spring pastures if cattle are under stress. Keep a close eye out for the warning signs, and institute mitigation strategies as needed.