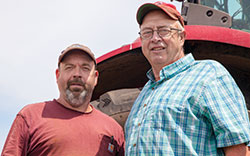 Tom Molitor (left) is in charge of the crops, while brother Joe oversees the herd at Molitor Organic Dairy near St. Cloud, Minn.
Like stepping into a perfect picture, the herd of Holsteins grazed peacefully out on the pasture. A stone-based barn stood as the farmstead centerpiece. Rows of bales and baleage complemented the landscape.

But pasture isn’t the only focus on this organic dairy. There is also a large amount of attention paid to stored forages that must be used during Minnesota’s long winters. Forage quality is paramount for holding production during the nongrazing months that begin in October for the milking cows and November for the heifers and last until May.

Keeping a watchful eye over the cows is Joe Molitor.

Joe, along with his brother Tom, runs the operation. It’s always been a farm with a strong emphasis on family. Tom and his wife, Mary, have two sons and two daughters that are 17 to 22 years in age. Joe has eight daughters, ranging in age from 15 to 32. In addition to weather whims, milk price fluctuations, and the usual array of everyday farm challenges, this family has endured and adjusted to the loss of Joe’s wife, Shirley, to a car accident in 2010.

Joe’s youngest two daughters are still on the farm and help with chores. Another daughter, Hannah, serves as herdsman. Tom’s children are also involved in the operation and help
out wherever they can, especially with fieldwork. They also get some extra help at milking time from area high school students.

The Molitor family first homesteaded the farm near St. Cloud, Minn., in 1929 with some chickens, hogs, and just nine cows. In the 1960s, their father, Donald, and uncle, Clifford, took over the family farm and grew the milking herd to 50.

In 1981, Joe and Tom took over the then 100-cow herd. They purchased 200 more cows and started to explore the idea of utilizing pastures as a main source of forage.

By 1990, the brothers had transitioned all their heifers to a grazing-based diet.

Joe and Tom’s father retired in 1994, and the farm started to expand shortly after. With the expansion in the late 1990s came the transition of moving their herd onto pasture and becoming a low-input, grazing-based operation.

In 2003, the Molitor’s started the transition to organic. “We were already grazing so it wasn’t too difficult to make the switch,” explained Joe. The likelihood of improved soil health supported this change; the idea of doing something unique and the higher milk price also motivated the brothers.

The transition didn’t occur without struggles. Having to feed organic-priced feed while getting conventional milk checks was a major challenge.

After the three-year transition, the first load of organic milk shipped in 2006 to Horizon Organic, which was owned by WhiteWave Foods at the time. After the acquisition of WhiteWave Foods by Danone, the Molitors continued to ship to the newly minted DanoneWave.

A little bit of everything

According to Joe, the farm’s pastures consist of “a little bit of everything.” The pastures, which used to be pure orchardgrass and clover, now feature orchardgrass, meadow fescue, bluegrass, and intermittent white clover with reed canarygrass in the low areas.

Most of the pasture is permanent but some new seeding also occurs. “We do a little bit of frost seeding every year,” Joe explained. On winter pastures or in muddy conditions, red and white clover is seeded; otherwise, annual ryegrass is the seed of choice.

This past year, the Molitors faced the challenge of having their orchardgrass winterkill. “It’s only occurred two times in 30 years,” Joe said. He also noted that keeping enough legume component in the pasture remains a challenge.

To combat the erratic rainfall and sandy loam soil, the Molitors installed pivot irrigators in two of their pastures in 2008.

The farm consists of 1,220 total acres. Pastures take up 700 acres with 500 of those being rented. The Molitors also maintain 300 acres of alfalfa that is mostly harvested as baleage and 220 acres of corn for silage each year.

In order to be certified organic, the cows’ diet needs to be at least 30 percent pasture based. This has been a challenge for the Molitors due to the restriction of being landlocked. “We do not own some of the surrounding land around buildings,” Joe explained. “We can’t cross the county roads to the south either,” he added.

To mitigate this limitation, cows are fed 70 percent of their ration during the eight hours per day that they are “home” to be milked. It comes in the form of a total mixed ration (TMR). The Molitors utilize a TMR of alfalfa baleage, corn silage, and cracked corn to meet nutritional needs. Essentially, the TMR is 90 percent forage.

Since all of the corn they raise is harvested for silage, with two thirds stored in upright silos and the other third in bags, the Molitors purchase all of their cracked corn. But, each load must meet certain standards. “Each load is tested for the presence of GMO (genetically modified organisms),” Joe noted.

Over this past year, 7 pounds of cracked corn were incorporated in the diet during the summer, while only 4 pounds are used in the winter to balance the high energy hay and corn silage they feed.

Just like any operation, but perhaps more challenging in an organic system, the battle with weeds is an annual occurrence. In their corn, the Molitors use a combination of practices to keep weeds at bay. To start, they don’t plant until the last week in May. “This gives corn time to outrun the weeds,” Joe explained.

Corn is planted in 8-inch twin rows using 38-inch centers. Shortly after planting, weeds are burned once using a row crop burner. A rotary hoe and cultivator are also used to combat weeds.

Also, a crop rotation system is utilized to maintain soil fertility and keep weeds at bay. The rotation starts with the first year of seeded alfalfa followed by two full production years. Over the next two years, corn is planted with cover crops used in between planting and harvest.

Weed pressure in their pastures isn’t much of a problem for the Molitors thanks to clipping and grazing management. However, their challenge is keeping adequate soil potassium levels in an organic system.

Thanks to a dry spring, the Molitors have often been able to make “baleage in a day.” The alfalfa is cut, tedded, raked, and baled all in one day. High-quality baleage is an important component of the cow ration along with pasture forage.

Another unique aspect about this organic operation is how they manage their hay.

The Molitors don’t condition their hay for a specific reason. “We lay the hay out using the full width of the cut,” Joe shared. “We feel the sugar content of the hay is improved and plants continue to photosynthesize for a longer duration because the stems are not crushed; hay knows it’s dead when it’s conditioned. We also achieve higher protein because there’s no conditioner leaf loss.”

This past spring, the Molitors were able to make “hay in a day” thanks to a dry spring. “Normally for first cut it takes more than one day because of the heavy crop. This year, there’s less forage because of how dry we were,” Joe explained.

The Molitors cut their hay early in the morning, and they start tedding after the dew evaporates. Later in the afternoon, the hay is raked and then baled about an hour later. “Usually, we harvest our baleage at about 50 percent moisture,” Joe stated.

For dry hay, the Molitor’s use a forage conditioner. “It’s too tough to get it dry otherwise,” Joe said.

With Tom at the helm of all things related to crops, Joe at the forefront of managing the herd, and their children having filled every role in between, it’s without a doubt that this farm is a family affair. Though that’s an important component of the operation’s values, it doesn’t guarantee financial success.

“We have to feed good forage and lots of it,” Joe reflected. “That’s what keeps this farm operating at a profitable level.”

This article appeared in the August/September 2018 issue of Hay & Forage Grower on pages 6 to 8.

These Bales make bales Next

He’s one of only two Previous