Over two-thirds of all agricultural land in the U.S. is grasslands, with a large economic value as well as many ecosystem benefits. Forage crop systems enjoyed maximum popularity in the middle of the 20th century after the Dust Bowl era, with pastures and hayfields recognized for their soil conservation benefits. In those times, the land-grant college system provided significant funding, infrastructure, and support for a relatively large number of forage crop scientists, but that’s no longer the case.

As the U.S. population transitioned from rural to urban/suburban, federal and state support for agricultural research declined. The precipitous decline in support for forage crop research is strongly correlated with the power of commodity organizations and the perception of the commodity by the agricultural community and the public.

Forage crops generally lack any commodity status and are perceived to be the least relevant when cuts to university research, extension programs, and faculty are mandated. This problem is most striking in the Northern and Western states. 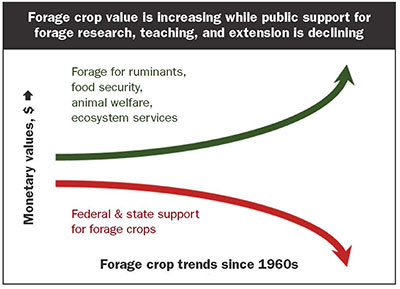 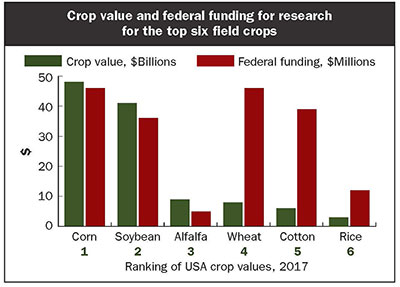 Although forage crops promote clean air and water, and reduce flooding and erosion, the public is unaware of the value of the forage commodity. Perennial forages grown on land not suited for row crops contribute greatly to domestic food security. Grasslands have an economic value estimated at over $45 billion annually. Forage crops can provide 50 to 100 percent of the total feed requirements of ruminants and serve as one of the primary resources that allow effective nutrient management planning.

The website of the USDA Economic Research Service highlights economically important U.S. crops and was updated May 8, 2018 (www.ers.usda.gov/topics/crops/). The list of “crops” includes: corn, soybeans, wheat, cotton, rice, vegetables and pulses, fruit and tree nuts, and sugar and sweeteners. The first five crops listed here are often considered the “big five” in the country. Alfalfa and other forages are not considered economically important and are not mentioned.

USDA’s National Agricultural Statistics Service (NASS) recently released 2017 field crop values, showing that alfalfa is now the third most valuable field crop produced in the U.S. (see graph). It is also clear from the figure that research funding for alfalfa is pitiful compared to other crops.

Valuable in other ways

Increasingly, farmers are under the microscope for their environmental stewardship. Ecosystem services are the benefits that people obtain from natural and agro-ecosystems. These include air and water quality, soil conservation, carbon sequestration, nutrient and energy cycling, and species biodiversity. The stability and resilience of an ecosystem is related to biodiversity, particularly as climate fluctuations become more common.

Grasslands contribute to the biodiversity and beneficial functioning of rural ecosystems. Nitrogen fixation by forage legumes alleviates some of the environmental costs of nitrogen fertilizer production, transport, and application. Perennial forages make tremendous contributions to soil health, but are rarely credited for it. Increased use of perennial forages provide pollen and nectar for pollinators, and improves wildlife habitat, which can positively impact tourism, hunting, and taxpayer appreciation of natural ecosystems.

Grasslands safeguard watersheds while providing scenic beauty and public goods and services. Perennial forages reduce the problem of nutrient accumulation in water bodies, which causes eutrophication, degradation of water quality, and fish kills. The New York City watershed in upstate New York provides drinking water for approximately 9 million people in the New York City area. This is the largest unfiltered drinking water supply in the United States. This high-quality water does not require treatment, in large part due to the strategically placed perennial forage crops grown on farms in the watershed.

Continuing with the example of New York State, forages are the most valuable crop, approaching $1 billion in value. In 2017, the National Agricultural Statistical Service reported that the total dollar value of forage crops for New York State was 50 percent higher than the combined value of all vegetable and fruit crops. Yet there are more than 10 times the number of fruit and vegetable crop scientists at New York’s land-grant university than there are forage scientists.

Commodity promoters of vegetable and fruit crops make the case that these crops have many value-added qualities. If we assigned a modest per-acre value to the ecosystem services provided by the massive forage acreage it would dwarf the added value of all other crops.

Forage and pasture systems provide great value to society and to agriculture, but reduced faculty appointments dedicated to the study of forages have resulted in fewer forage courses and reduced development of future forage scientists. As the current pool of trained forage crop faculty and crop consultants ages and retires, the agronomic industry will lose most of its expertise in forages.

The success of the land-grant college system in boosting agricultural productivity led to a rapid decline in rural populations; traditional land-grant programs have gradually become a casualty of their own success. Federal support for land-grant colleges has declined substantially during the past 40 years, forcing states to provide much of that support. In the growing urban states, particularly in the northern U.S., competition from urban programs has claimed more tax revenues.

Policy makers and stakeholders have lost touch with agricultural research and are less willing to support it. In witness of this fact, the urban public is much more willing to support crops that directly end up on their dinner plates, without considering the forages represented by meat and milk products.

In 2008, the National Institute of Food and Agriculture (NIFA) was formed within the USDA to integrate scientific disciplines and to integrate research, education, and extension activities. A very tiny fraction of NIFA’s research and education budget has been dedicated specifically to forage and grasslands. The disturbing decline in support seen in the U.S. is in contrast to policies in Canada, Europe, Australia, and New Zealand, all of which maintain strong support for forages.

Forage crops have always provided an excellent return on investment. Ironically, while their value is increasing, the investment in them is dwindling. Forage crops are a major renewable natural resource with significant ecosystem services benefits, but they receive little recognition among university and government administrators. Forage crops are not seen as a commodity, and therefore will continue to lack commodity support.

We must identify legislative champions for forage crops who will advance the importance of bolstered state and federal funding for this irreplaceable foundation of animal agricultural systems. Such champions could effectively use forage crops as a prime example to counter the public’s common view that all conventional agriculture is unsustainable. Forage crops will survive this lack of appreciation, but forage crop extension, teaching, and research faculty at universities may become extinct.

This article appeared in the August/September 2018 issue of Hay & Forage Grower on pages 18 and 19.

Another “must do” for best baleage Next

Fiber digestibility is more than a lab measure Previous