Waiting to go up in smoke

Taking time and effort to prevent hay fires has never made more sense. 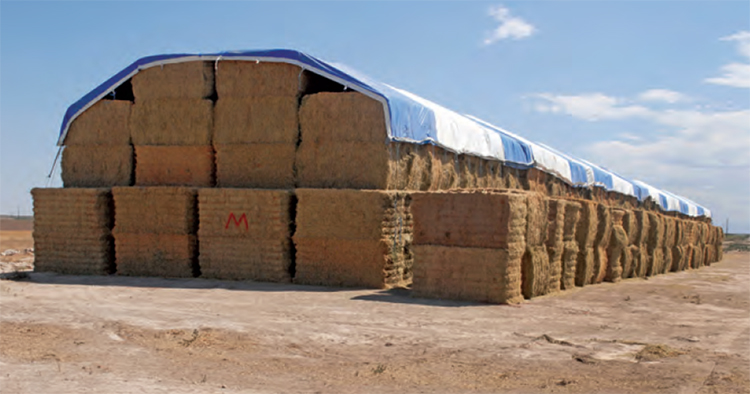 Many bales of expensive hay in big stacks is a recipe for financial disaster that is present to some degree on every dairy in the West.

But it is a risk that doesn’t have to exist, says University of Idaho extension forage specialist Glenn Shewmaker, who has 11 strategies for dairies to reduce the risk of hay fires. They don’t center around buying expensive equipment, but making time to take samples frequently, keeping records and learning what to look for.

In recent years, the price of top quality milk cow hay has often been more than $300 per ton. Any price remotely close to that means a fire, no matter how small or how quickly it is put out, will cause thousands of dollars of losses. Tens or even hundreds of thousands is much more likely, however, and not just because of hay that is destroyed outright. Cattle often refuse to eat nearby bales that are heat and smoke-damaged, which is a loss that is difficult to quantify.

Ironically, it is water in the form of plant moisture that is the key to preventing many hay fires. That’s why adequate drying time for cut alfalfa in the field and proper moisture content at baling are so crucial.

Shewmaker explains that heat is generated in hay bales when microbial growth uses carbohydrates as an energy source. Plant and microbial respiration convert carbohydrates and oxygen into carbon dioxide, water and heat, which results in both weight loss (dry matter yield) and increased bale temperature.

He says large square-ended bales are susceptible to greater storage losses and risk of spontaneous heating than small square-ended bales formed at the same moisture, mainly because of reduced surface area per unit of forage dry matter, or greater density in the bale. Water is one of the end products of microbial respiration, so the higher the moisture content of hay the higher the microbial respiration and subsequent moisture production in hay after baling.

“With moisture levels that are considered to be safe for the specific forage and bale type, bales will “sweat” and heat gradually from several degrees above ambient air temperature initially, to about 140ºF after 3 to 7 days of storage,” says Shewmaker. “Hay will gradually cool back to ambient air temperature within 21 to 28 days after baling. The longer it takes, the more damage is done to hay and the more likely a fire may result.”

Hay fires from spontaneous heating usually occur within six weeks after baling, but may also occur in cured hay when external moisture is added or when more oxygen is allowed inside the stack.

If the moisture level of hay at baling is greater than what is recommended for storage, Shewmaker advises checking the moisture and temperature at least twice per day for abnormal heating.

“If hay temperature reaches 130ºF you could be on the way to a hay fire, so close attention needs to occur,” he warns. “The best option is to arrange for someone to feed those bales as soon as possible. They could also be placed to allow increased air circulation and cooling.

“If hay is stacked tightly or in a barn and the temperature climbs to 150ºF or greater, call the fire department and be prepared to inject water to cool any hot spots before moving the hay. Don’t move the hay without fire suppression equipment if it is smoking, if you can see charred centers in bales, or if you can smell a strong odor. If additional oxygen reaches areas near high-temperature hay it can burst into flames.”

Shewmaker says hay producers, brokers and buyers need to avoid situations that raise the risk of hay fires and take necessary precautions. The following are 11 strategies to minimize the potential of heat-damaged hay and spontaneous heating:

1. Record day(s) of cutting and drying conditions in a journal.

2. Monitor hay moisture before raking, tedding and baling. Use a tactile (feel) method to evaluate hay moisture. If a single-probe electronic meter is used, use a windrow sampling tool appropriate to simulate the bale density that electronic moisture probes are designed to operate.

3. Record the day of raking, tedding and inversion, as well as baling and drying conditions.

4. Test the first three bales from a field with a hand-held electronic moisture probe in two places on each side or ends of the bale (a total of 12 readings) and note the low, high and average. If average moisture is below the maximum for the type of bale and forage, continue baling.

5. Observe the baler moisture meter if available and/or the bale pressure indicator. When anything changes, get out and retest more bales as in strategy No. 4.

6. Record the date, time, weather conditions and moisture average and range at baling in your journal.

7. Mark any bales with higher moisture than desired and notify the person stacking the hay to separate them from dry bales with space between bales to facilitate air movement and drying. Try to feed those bales as soon as possible. Do not store any bales with moisture over the recommended level for that bale type in a large stack or hay shed.

8. Review and comply with your insurance carrier’s requirements for fire insurance coverage.

9. If moisture is marginal, stack large bales in a single column with no more than 500 tons per stack. Under these circumstances, allow at least 100 feet of separation to the nearest adjacent stack. Lay out the stack so it can be quickly broken apart with a loader. Avoid mixing different lots of hay because of marketing and hay fire issues. If bale moisture is marginal, monitor moisture and temperature in the stack at about 20 random or systematic locations.

11. Protect stored hay from external weather and water by elevating the base and having adequate rain gutters to direct the flow of water away from the stack.

Optimize your hay storage Next