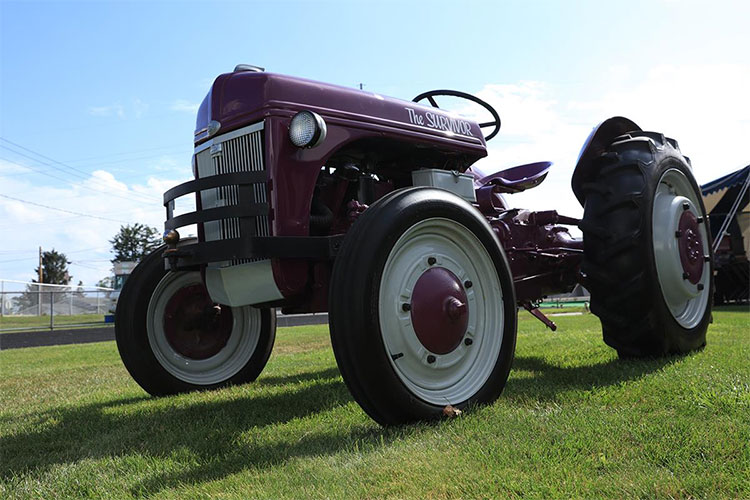 New Holland ended its two-year-long Survivor Tractor campaign the way it began: with an auction raising awareness and money for cancer research. A fully restored 1939 tractor, the Survivor Tractor was auctioned off for $8,000 to Mr. Joseph “Bubby” Knott, original tractor owner, on Sat., Nov. 10, at the Mecum Auctions Iowa Premier 2018 in Davenport, Iowa. Each owner of the tractor commits to donating 100 percent of the funds to various charities supporting cancer awareness and research efforts.

As a symbol of strength in the face of adversity, the Survivor Tractor, has been the anchor of a two-year effort to share survivor stories, and increase attention and funds towards the fight against cancer. This year, the fight against cancer became more personal for the New Holland community after one of its employees lost his battle to cancer.

“We always intended to donate the money raised through the New Holland Survivor Tractor efforts to the American Cancer Society”, said Bret Lieberman, Vice President of New Holland North America. “What we didn’t realize was how closely this cause would hit close to home around the timing of the auction. Our New Holland family recently lost one of our own through a brave fight with lymphoma. His name was Tony Resh. We wish for the money raised during the past year to be accepted by the American Cancer Society in honor and remembrance of him: our colleague and friend, and an incredible man, husband and father.”

Since its purchase in November 2016, a sale which resulted in a thirty-two thousand-dollar donation to the Ann B. Barshinger Cancer Institute at Lancaster General Hospital in Lancaster, Pa, thanks in part to a donation match from the owners of Wolgemuth Auction, Survivor tractor has traveled across the United States and been on display in numerous tradeshows and New Holland dealerships. The tractor has been the cornerstone of dealer open house events as a symbol of hope for communities celebrating friends and family who are survivors and supporters of the fight against cancer.

During the campaign, New Holland raised more than $100,000 with all funds being donated to the American Cancer Society and localized support organizations identified through participating New Holland dealers. Through photos, videos and stories online using the tag #SurvivorTractor, New Holland was honored to build a campaign which raised awareness and connected communities through the fight against cancer and the celebration of survivors.

New Holland is a brand of CNH Industrial N.V., a World leader in Capital Goods listed on the New York Stock Exchange (NYSE: CNHI) and on the Mercato Telematico Azionario of the Borsa Italiana (MI: CNHI). More information about CNH Industrial can be found online at www.cnhindustrial.com