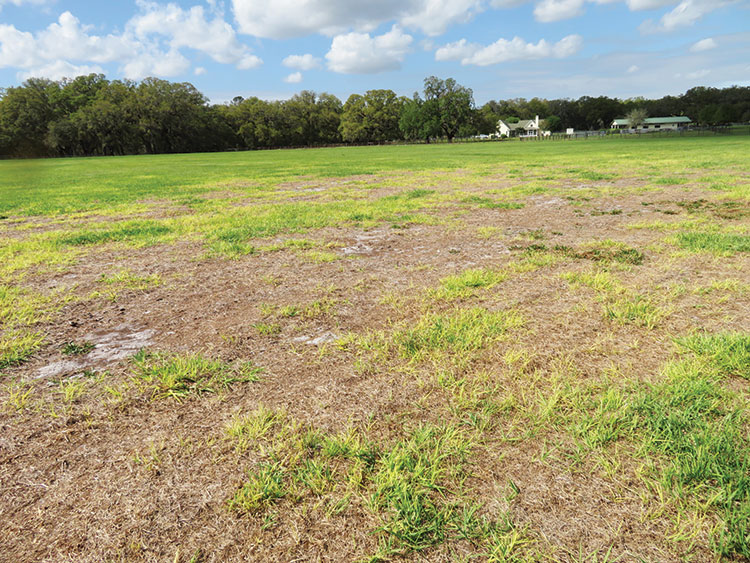 Several years ago, numerous reports surfaced of bahiagrass pasture decline. Bahiagrass is a hardy perennial that is used on approximately 2.5 million acres in Florida. It is very popular in low-input systems because it tolerates low soil fertility, poorly or excessively drained soils, and less than optimal grazing management. It also has relatively few significant pests. Thus, when producers complain about bahiagrass stand loss, it gets our attention.

Before we try to understand the current situation, let’s step back in time to the late 1980s and early 1990s. One of our extension colleagues at the time indicated that “existing recommendations for phosphorus (P2O5) and potassium (K2O) fertilization for bahiagrass may be too high.” This statement might cause you to wonder whether the science behind the P2O5 and K2O recommendations was correct.

Actually, the underlying science turned out not to be the problem. Instead, producers were no longer applying the recommended amount of increasingly expensive nitrogen fertilizer, but they had not lowered the amounts of P2O5 and K2O accordingly. In Florida’s sandy soils, nitrogen is nearly always the most limiting nutrient for grass growth. If less nitrogen is applied, plant growth slows and less P2O5 and K2O are needed by the plant.

As it became clear that producers were not applying recommended nitrogen fertilizer levels, researchers and extension specialists put their heads together and developed a sliding scale for bahiagrass pasture fertilization. It included low, moderate, and high-nitrogen options for the producer to choose from, with recommendations for P2O5 and K2O depending on the amount of nitrogen applied.

If a producer chose to apply the low nitrogen option (about 50 pounds of nitrogen per acre per year), the new recommendation was to apply no P2O5 and K2O in the first year. However, it was recommended that P2O5 and K2O be applied according to soil tests every third or fourth year to avoid excessive depletion of those nutrients. Producers were enthusiastic about reducing fertilizer cost by not applying P2O5 and K2O, and the practice was widely adopted.

If we fast-forward about 20 years to 2013, producers were expressing concern about the decline of perennial grass pastures, especially bahiagrass. A task force was appointed. They found that all affected pastures were at least 10 years old and 77 percent were greater than 15 years old, 62 percent had a soil pH below the target of 5.5 for bahiagrass, 62 percent had soil potassium classified as low, and 77 percent had low soil levels of either phosphorus (P) or potassium (K). They also ruled out grazing management and a disease or an insect pest as the primary source of the problem.

Based on the work of the task force, we felt that pasture decline was at least partially due to long-term, inadequate liming and the lack of P2O5 and K2O fertilization. Before we could feel sufficiently confident with that conclusion, we needed more data. On-farm research was done at four ranches in different areas of the state. The four ranches were identified during the work of the task force as having problem pastures, which had been heavily grazed year-round.

When we started the studies, the average soil pH was 4.94, and the average soil Mehlich-3 P and K levels were 13 and 21 parts per million, which were considered low by soil test. We evaluated eight treatments in replicated experiments at the ranches.

All of the treatment areas received 50 pounds of nitrogen per acre in March of each year because that is the typical producer practice. Each pasture was managed by the producer, with the exception of applying the lime and fertilizer.

The experimental ranch data corresponded well with the task force information. Liming and addition of K2O had the greatest impact on bahiagrass performance. Forage yield improved with liming in four of eight of the site-year combinations tested, and yield increased with K2O application in six of the site years (see table).

The one site-year when an observed yield response to P2O5 occurred was the only one when bahiagrass plant tissue phosphorus concentration (0.13 percent) in the zero P2O5 treatment was less than the minimum recommended level of 0.15 percent. This tells us at least two things. First, it gives us greater confidence in 0.15 percent as a minimum tissue-phosphorus level under these conditions. But it also provides strong evidence that a low soil-test phosphorus value, like those observed at these ranches, is often not a good predictor of a plant response to P2O5 application.

Why is this latter observation true?

Below the soil layer sampled for testing (6-inch depth) there is a hard pan where phosphorus may accumulate. Bahiagrass roots penetrate well below the 6-inch surface and can access the deeper phosphorus. So, although soil-test phosphorus accurately describes the condition of the surface soil, it does not describe the entire rooting zone. This is why plant tissue testing for phosphorus is now recommended for bahiagrass in these types of soil.

Based on our results, we conclude that failure to lime and provide key nutrients, particularly K2O, reduced performance of low-input bahiagrass pastures. Over a long period of time this led to pasture decline.

How could this happen?

Producers know that they need to fertilize. Remember, our recommendation to producers choosing to apply less nitrogen was to apply no P2O5 or K2O in the first year, but they were to apply P2O5 or K2O according to soil tests every third or fourth year to avoid excessive depletion. It seems likely that producers saw no immediate impact of eliminating P2O5 and K2O applications from their fertilizer program. As a result, they tested their soils less frequently, if at all, and declining soil pH went unnoticed, as did lowering levels of potassium.

Because bahiagrass is so tolerant of poor soil conditions, it did fine for a long time, more than two decades it seems. But eventually even bahiagrass plants became weakened to the point they could no longer survive, and pastures began to decline.

As we circle back to where we started, pasture grass decline is a current problem in Florida. The solution, however, is decades-old technology. Soil and tissue testing needs to occur approximately every three years, with lime, P2O5 (based on plant tissue concentration), and K2O (based on soil test) applied as needed to avoid low pH and excessive depletion of these nutrients. This is a simple, widely understood concept, but we all need reminders now and again, even about the most basic management practices.

The author wishes to acknowledge contributions to this article from Joe Vendramini and Maria Silveira, forage management specialist and soil scientist, respectively, at the Range Cattle Research and Education Center of the University of Florida.

This article appeared in the February 2019 issue of Hay & Forage Grower on pages 24 and 25.

Nitrogen considerations for winter pasture Next

Forage to feed to fertilizer Previous