Is it time to think about a larger square baler?

By Kevin J. Shinners
The author is a professor of agricultural engineering with the University of Wisconsin-Madison. 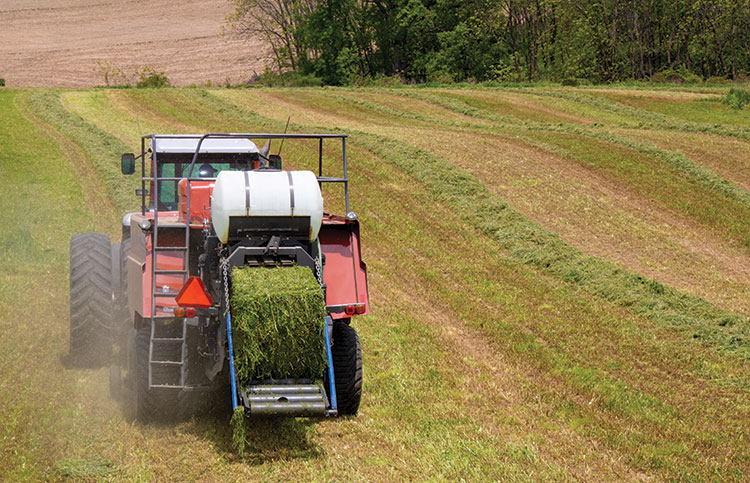 The costs associated with feeding or bedding with large square bales will just begin when the bale hits the ground. In fact, the combined downstream costs of gathering, handling, transporting, storing, and feeding those bales can easily exceed baling costs. To reduce total costs for a given annual tonnage, producers must reduce the number of bales handled.

The North American equipment industry identifies large square balers by the approximate bale width and height. Common nominal bale sizes (in feet) are 3x3, 3x4, and 4x4. Moving up from the smaller 3x3 to the larger 3x4 bale size can reduce the number of bales needed by a third without requiring extensive changes to the rest of the bale system.

To help producers compare costs of these two bale sizes, an extensive economic analysis was conducted to determine if cost reductions from handling, storing, and feeding a third fewer bales could offset the greater baling costs associated with using the larger baler.

The 4x4 baler was introduced in the late 1970s and remains a popular bale size in the Western commercial hay segment. But this bale size was too large to be handled by many livestock producers at that time, so the 3x3 and 3x4 balers were subsequently developed. At first glance, it would appear that the 3x4 bale is 33 percent larger than the 3x3 (12 versus 9 square feet cross-section, respectively), but a closer look at the actual size of the bales shows that is not quite true.

Manufacturers strategically size the bale dimensions to ensure legal transport height and width requirements can be met. Both bale sizes are usually 34.5 inches high, so the bales can be stacked three high on a trailer that is 5 feet high and not exceed the maximum load height of 13.5 feet.

Although legal transport width is 102 inches, bale width is set so three 3x3 or two 3x4 bales sitting across the trailer will occupy about 96 inches, which gives 6 inches of freeboard should the stack lean slightly. To meet this requirement, the 3x3 is 31.5 inches wide while the 3x4 is 47 inches wide, so the 3x4 is actually 50 percent wider and subsequently has 50 percent greater weight per bale. For a given annual tonnage, the number of bales needed is reduced by a third because two 3x4 bales have the same weight as three 3x3 bales. 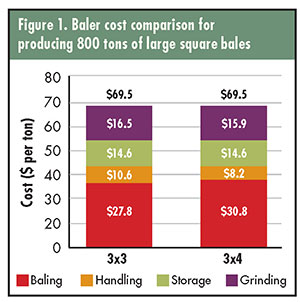 An extensive spreadsheet model was created to estimate the costs of baling, handling, storing, and processing bales of hay and crop residues. The analysis involved dozens of assumptions, and space does not allow inclusion here. But it is important to note that the costs of baling include the fixed costs of depreciation and interest, so the greater cost of the 3x4 balers is already rolled into the costs shown in Figure 1.

A producer baling 800 tons per year would produce roughly 1,600 3x3 bales or 1,050 3x4 bales. For this size of producer, the cost of making 3x4 bales was $3 more per ton than with the 3x3 bales. Baling costs were greater because the 3x4 baler was about 20 percent more expensive and requires a larger, more expensive tractor, which consumes more fuel. But the combined cost savings from having to handle, store, and process 550 fewer bales per year essentially offset the greater cost of baling with the 3x4 baler.

When more tons are baled per year, the fixed ownership costs of baling can be diluted across more bales, which rapidly helps drive down the fixed costs associated with baling. Figure 2 shows that the cost of owning and operating a large square baler may be prohibitive when annual tonnage is small. Using a round baler or a custom baling service are likely better options when only a few hundred tons are made annually. 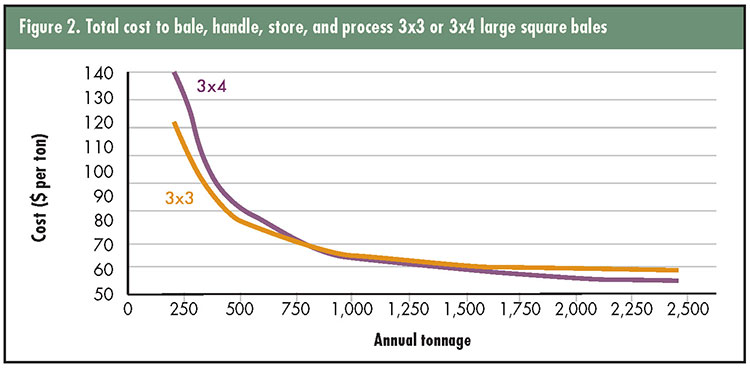 This analysis shows that the 3x4 bale size becomes more economical than the 3x3 bale size at roughly 800 tons per year — that’s about 1,600 3x3 bales per year. Although the differences in cost per ton are not great as more bales are made each year, Figure 3 shows that the total cost savings grow substantially with the greater annual tonnage. Of course, the crossover point where the 3x4 is more economical than the 3x3 will be different for every operation. But this analysis does show that the move to the 3x4 bale size could be advantageous for many operations. 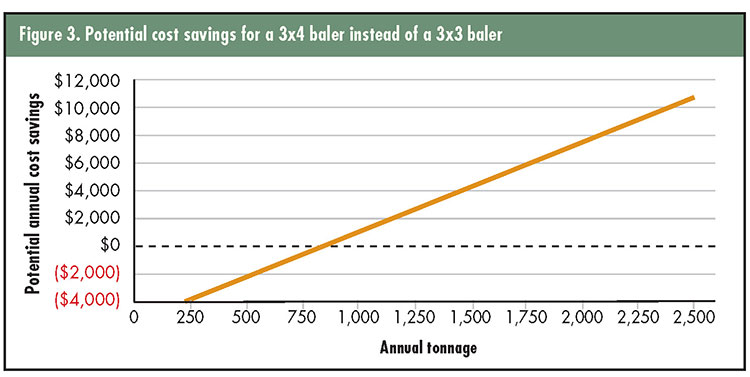 Thus far, costs have been presented in terms of dollars per ton, but producers and custom balers may be more familiar with charges on a dollars per bale basis. A review of the custom rate guides for Wisconsin and Iowa show that custom baling operations charge about $10 per bale to make 3x3 bales.

The 3x4 bale is 50 percent larger than the 3x3, so should the charge for making 3x4 bales simply be 1.5 times greater, or $15 per bale? This might not be the best choice because the 3x4 has greater baling costs than the 3x3. Baling costs will differ depending on the annual number of tons produced, but at 800 tons per year, that difference was about 10 percent.

To account for the greater baling costs, a baling charge of at least $15.50 per bale would be appropriate. Customers may balk at paying $15.50 rather than $10 per bale, but they will need to be educated that each 3x4 bale weighs 50 percent more than a 3x3 bale, and as a result they will experience the substantial benefit from having to handle a third fewer bales.

More to think about

The economics of different bale size is important, but other factors should be considered when contemplating a change from the 3x3 to the 3x4 bale size, including:

The 3x3 large square baler was introduced more than 30 years ago to meet the needs of smaller livestock producers. As operations become larger with more than adequate equipment to handle the bigger 3x4 bale, it may be time to consider the potential economic benefits of the 3x4 bale size.

This article appeared in the April/May 2019 issue of Hay & Forage Grower on pages 6 and 7. Not a subscriber? Click to get the print magazine.

Get paid for custom work: a lawyer’s tips Next