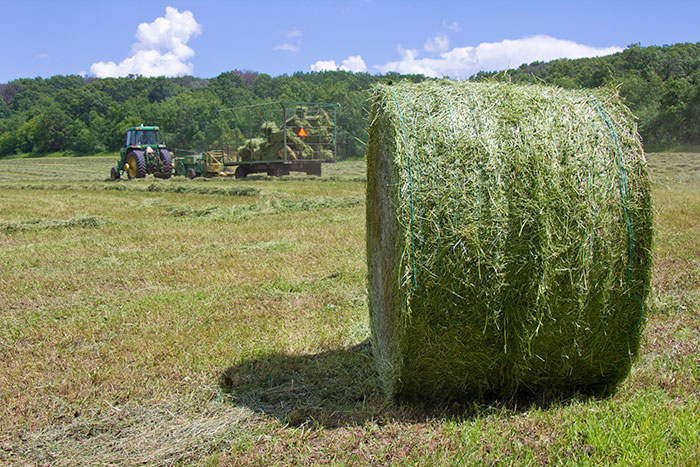 Nobody wants to bale hay that is higher in moisture than it should be, but all haymakers have done it.

Moisture offers an in-bale environment where microbes and fungi remain active, which both creates heat and ultimately lowers forage quality. In a worst-case scenario, spontaneous combustion can occur.

“Even heat that doesn’t get to the level of combustion can start to cause issues with hay,” notes Ben Beckman, an extension educator with the University of Nebraska. “Hay is not protected from oxygen like anaerobic, fermented feedstuffs such as silage or haylage. High temperatures, moisture, and oxygen allow aerobic bacteria to multiply, using plant protein and sugars for growth and producing carbon dioxide, water, and heat. Temperatures can rise high enough to kickoff a process called the Maillard reaction,” he adds.

The Maillard reaction is not a unique process to wet hay. It often is used to do such things as sear a steak or to brown bread when cooking or baking.

Moisture acts as the catalyst for the Maillard reaction, which begins at around 170°F. Proteins (amino acids) and sugars undergo a series of chemical reactions and form what is known as a Maillard polymer.

The resulting hay is sweet and tobacco-smelling with a golden, caramel color. “Cows love it,” Beckman notes. “Just like I can’t turn down a perfectly seared steak, the result of the Maillard reaction in hay is a treat for cows.”

The problem is that the caramelized hay has little to no nutritional value. The Maillard chemical reactions tie up proteins and a standard crude protein analysis won’t reflect the loss in nutritional value. It will overestimate the available forage protein.

“If you suspect bales have had caramelization occur, be sure to test for heat damaged protein (HDP) or acid detergent insoluble crude protein (ADICP),” Beckman advises. “These tests will show how much unavailable protein content there is due to the Maillard reaction and feed rations can be adjusted accordingly. At some labs, this test will also be shown with the adjusted crude protein content,” he adds.

Finally, Beckman notes that the same conditions that favor the Maillard reaction also are conducive to mold formation. Though not always toxic, mold can reduce palatability.