By Melissa Beck
The author is a freelance writer based in Stillwater, Okla. 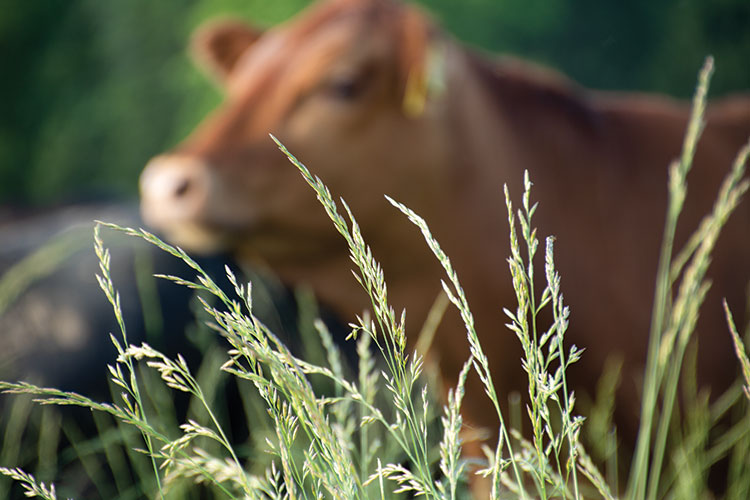 What if pasture grass was poisoning your cattle?

That is exactly the case with toxic tall fescue. Some producers go to great lengths to try to mitigate the negative impacts of toxic tall fescue. Others, like Darrel Franson of southern Missouri, are opting to convert pastures to novel endophyte fescue and eliminate the problem all together.

Franson is often known to ask, “Would you give a kid 3/4 of a teaspoon of arsenic instead of two teaspoons a day? Why feed poison at all?”

Toxic tall fescue is a prolific perennial grass. Its merits were first recognized by Kentucky farmer, William Suiter, in the late 1800s. Fescue has an amazing ability to persist, even under less than desirable environmental conditions, and can produce up to 3,000 pounds forage dry matter per acre in the fall. It is winterhardy, insect and nematode resistant, and grows well in marginal soils. It’s no surprise that fescue gained popularity with producers in the 1940s and 1950s. Today, toxic tall fescue is grown on almost 40 million acres of pasture in the U.S.

It wasn’t until the late 1970s that researchers in Georgia were finally able to identify an endophyte (fungus) in the plant that produced ergot alkaloids.

Fescue toxicosis, the resulting syndrome to livestock from exposure to ergot alkaloids, is responsible for up to $1 billion in production losses annually to the livestock industry. These losses occur from depressed weight gains, elevated body temperature, rapid respiration, up to 45% lower milk production, and poor reproductive performance. Physical symptoms such as hoof, tail, and ear loss also occur.

Fescue can be toxic because there is a symbiotic relationship between the endophyte and the plant, and when scientists removed the endophyte, the toxicity problem was eliminated; however, the endophyte-free fescue plants lacked hardiness and persistence, two desirable traits that toxic fescue was known for.

Joe Bouton at the University of Georgia, and Gary Latch, Ag-Research Limited of New Zealand, worked together to develop the first novel endophyte tall fescue. The first seeds were released in 2000. Novel endophyte tall fescue does not produce the toxic alkaloids that negatively impact livestock, but maintain the benefits of persistence and overall vigor associated with the symbiosis of the endophyte-plant relationship.

“Even after focused management and grazing, I recognized that toxic fescue was costing me gains,” Franson said. “I’m a numbers guy; I do the math. I know what calves will gain on cool-season grasses if it’s not poisonous, and my gains were well below expectations.”

In addition to reduced gains, the Show-Me State farmer wasn’t getting the desired conception rate in his cows.

For Franson, the cost of converting toxic pastures penciled out, even on his rented ground. He noted, “I’ve got records that prove it. When the neighbor said I could go ahead and kill his toxic fescue on 16 acres of grass I rent from him, I went ahead and spent $3,200 to do it. I’ll have that investment back in under two years.”

There is a partnership of industry, government, producers, university, and other professionals called the Alliance for Grassland Renewal, which has a mission of replacing toxic tall fescue with nontoxic endophyte fescue. They help producers through education, seed quality control, incentives, and promotion.

One option the Alliance for Grasslands Renewal recommends is to eliminate toxic fescue in 25% of pastures as a start. This enables producers to remove cattle off of toxic tall fescue at key times during the year. This conservative approach helps ensure the new pastures are established and the ranch will have grass in the interim. This approach also allows producers to spread the cost of converting the pastures over a longer period of time.

A recommended method for converting pastures from toxic tall fescue to novel endophyte fescue is “spray-smother-spray,” which involves killing the fescue in the spring with herbicide, planting a summer smother crop (a warm-season annual), and spraying any residual toxic fescue that comes back in the fall.

Another approach is double spraying without a smother crop, a method popular in the southern areas of the Fescue Belt. Producers are encouraged to be conservative when converting pastures, just in case weather conditions aren’t conducive to establishing pastures, thereby avoiding a loss of the entire forage base.

Ample research indicates the expense of converting pastures could be recouped in returns from animal performance. Based on a four-year study in Arkansas investigating the effects of toxic tall fescue on the cow-calf herd and ways to mitigate it, John Jennings, an extension forage specialist at the University of Arkansas, said, “Converting 25% of the pastures to novel endophyte fescue improved calving rates from 44% to 80%.”

A three-year research project conducted by Stacey Gunter and others from the University of Arkansas showed that novel endophyte tall fescue produced net returns of $89 per acre and would require four years for a new planting of novel endophyte fescue to break even.

The Alliance for Grassland Renewal is hosting one-day schools in seven locations across the Southeast. Topics will include how to transition from toxic to nontoxic fescue, the economics of pasture renewal, forage establishment, and first-year management of novel endophyte fescue.

This article appeared in the February 2020 issue of Hay & Forage Grower on page 20 and 21.

Mind your metrics Next