Appraising forages with dollars and sense

By Alex Tebbe, Bill Weiss
Tebbe is a graduate research assistant and Weiss is a professor of dairy nutrition with The Ohio State University, The Ohio Agricultural Research and Development Center, Wooster, Ohio 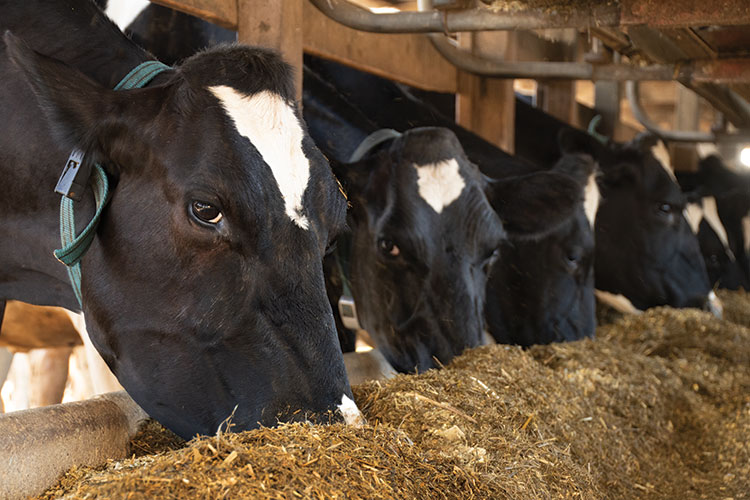 Whether you are in the business of growing and selling forages or feeding cattle, correctly assigning the economic value of forages can impact profitability. Forages obtain their economic value when fed to animals, and a forage appraisal system should reflect the ability of that forage to support growth and milk production.

That ability is a function of the nutrient composition of the forage and its effect on feed intake. Relative feed value (RFV) and relative forage quality (RFQ) are often used to appraise forages; however, they put no value on protein, they consider fiber only as a negative factor (higher fiber equals lower RFV and RFQ), and they are not good when comparing across forage classes (for example, alfalfa, grasses, or corn silage).

Lab results usually include crude protein (CP); however, not all CP is created equal. Most ruminant nutritionists balance diets for metabolizable protein (MP) rather than CP. The concentration of MP depends on the digestibility of the rumen undegradable (or bypass) protein and on the proportion of rumen degradable and undegradable protein in a feed.

The problem with using MP is that it is calculated for diets and not individual feeds. Labs usually do not provide an MP concentration. However, if we assume that the forage will be fed in a balanced diet and has typical rumen degradability, then its MP equals CP times 0.56. If alfalfa hay had 22% CP, it will have approximately 12.3% MP. The CP in other common feed ingredients have different conversion factors to MP. Because feed evaluation software uses several different feeds, MP, rather than CP, must be used.

Most dairy nutritionists use neutral detergent fiber (NDF) in ration formulation. The NDF from all feeds provide energy, but NDF from forages is needed for rumen health, which translates into better animal health and improved milkfat production. For this reason, NDF from forages is worth more than NDF from other feeds such as distillers grains. By dividing NDF into two fractions, effective and non-effective NDF (eNDF and neNDF), we can give more value to the NDF that promotes rumen health. The NDF from forage can be considered 100% eNDF.

What are nutrients worth?

Routine lab analyses provide nutrient composition data, but we need to translate those numbers into dollar values. Software programs are available to compare feed prices based on nutrient composition. Sesame, which was developed at The Ohio State University, estimates the dollar value of nutrients (Table 1) using a statistical method that relates prices of a host of different feeds to their nutrient concentrations. These values are also available from various sources such as Buckeye Dairy News (dairy.osu.edu).

The calculated prices are specific to a given market and may not reflect historical or future prices. Note that estimates for nutrients are not absolute and include a plus/minus term (Table 1). The plus/minus terms mean that those four nutrients alone are not the only factors affecting feed prices. The uncertainties associated with nutrient prices need to be reflected in the calculated total value of feeds.

As an example, let’s say we have a truckload of alfalfa hay sold in the Midwest that is 85% dry matter (DM). Its nutrient composition on a DM basis is 0.62 Mcal of NEL per pound, 40% NDF, and 23% CP. Because alfalfa is a forage, eNDF equals 40% and neNDF equals zero. First, we convert CP to MP by multiplying by 0.56 so that MP equals 12.9%. Second, we calculate how many nutrients are in a ton of hay.

Nutrient intake by cows profoundly influences productivity, and forage quality has a major effect on intake. Unfortunately, the nutrients discussed above do not adequately account for differences in potential intakes among forages. For forages, the best single lab assay to estimate differences in intake is in vitro NDF digestibility (IVNDFD).

Within a forage class (for example, legume or corn silage), a 1% unit increase in IVNDFD on average boosts intake by 0.26 pounds per day and milk yield by 0.47 pounds per day. This is based on Michigan State University research from Masahito Oba and Michael Allen, which was published in the Journal of Dairy Science in 1999.

Since intake and milk are associated with change in IVNDFD, a base IVNDFD value is needed. The base values used here are the mean IVNDFD for alfalfa, grass, and corn silage from a publicly available feed library; in this case, it comes from DairyOne Laboratory, Ithaca, N.Y. It does not matter if you use a 30- or 48- hour incubation, but the incubation time must be consistent within a comparison.

To calculate the quality adjustment, the difference between IVNDFD of the forage sample and base value (Table 2) is calculated: IVNDFD (sample) minus IVNDFD (base). The value is then multiplied by 0.26 to estimate change in intake and 0.47 to estimate change in milk yield. The dollar value of “forage quality” depends on the milk price and diet cost (Table 3).

The cost of diet varies depending on the production level of the herd and the ingredient costs, but in most cases, it will range between 8 to 12 cents per pound of DM. If available, actual farm-derived feed costs should be used, but if not, we suggest using 10 cents per pound. If the corn price is more than 10% or 20% above the historical price, use 12 cents, and if corn grain is 10% or 20% less than historical average, use 8 cents per pound. The studies summarized by Oba and Allen had an average forage inclusion rate of 31 pounds, so that value was used in our calculations (Table 3).

As an example, let’s assume alfalfa hay has a 48- hour IVNDFD of 54%. We will also assume a milk price of 19 cents per pound and a diet cost of 8 cents per pound of dry matter.

That value is added (or subtracted) from the nutrient value calculated as described above. Therefore, alfalfa hay in our example has a total value of $232 per ton ($205 plus $27).

The value calculated using this method has uncertainty associated with it, and the nutrient value should actually be considered as a range. A good benchmark for this range is plus or minus 12.5% of the calculated value.

In the example above for $232 per ton alfalfa, a reasonable range is $203 to $261 per ton. Prices at the low end of the range would be considered a bargain for the buyer, and prices at the high end would be overpriced. Prices near the calculated value of $232 per ton would be considered the break-even price. Using this method gives growers an idea of what improved nutrient quality is worth, offering buyers the ability to make more informed purchasing decisions.

This article appeared in the February 2020 issue of Hay & Forage Grower on page 31 and 32.