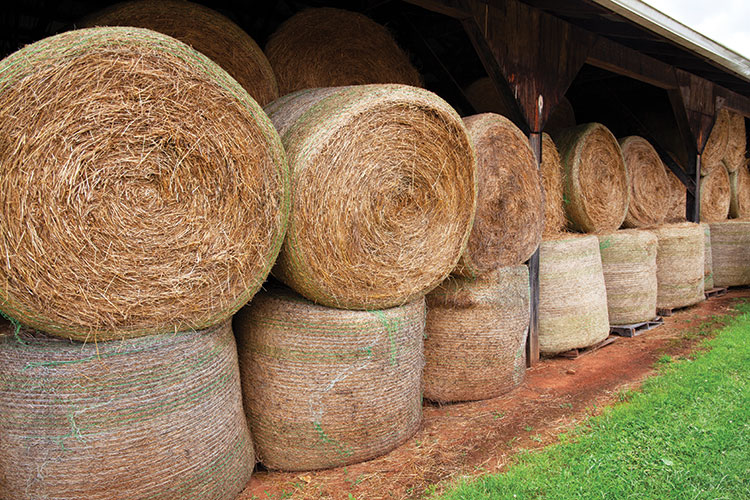 The next time you drop a round bale into the ring feeder, think about the investment that you’ve made in that bale. You’ll probably consider the costs of land, stand establishment, fertilizer, machinery, and handling. However, we often overlook “shrinkage” and quality losses that occur during outdoor storage.

These losses occur for a simple reason — water has entered the bale and wasn’t able to leave through evaporation, resulting in spoilage. The deeper water penetrates the bale, and the longer that water stays in the bale, the greater the expected losses. Fortunately, round bales have characteristics that limit storage losses.

The round shape of a dense, well-made bale with a good outer thatch will help shed precipitation and limit spoilage inside the bale. Grasses with broad, flat leaves form a very good thatch, which help these bales shed water better than alfalfa bales. Modern balers are all capable of making great bales that can conserve value if good outdoor storage practices are followed.

Understanding the impact that bale storage practices have on water infiltration into bales was the subject of a 2019 study conducted in southeastern South Dakota. Specifically, the work considered alfalfa bales that were stored indoors or directly on the ground. The bales experienced 20 inches of precipitation from February 1 to July 31, but there was just a 0.06 inch of rain the week before bales were sampled. At removal, an electronic moisture probe was used to estimate the moisture at 50 locations throughout the bale. Data was collected at a depth of about 8 inches from both vertical faces of the bale. This data was used to generate spatial maps of moisture within the bale, and these have been included in this summary. 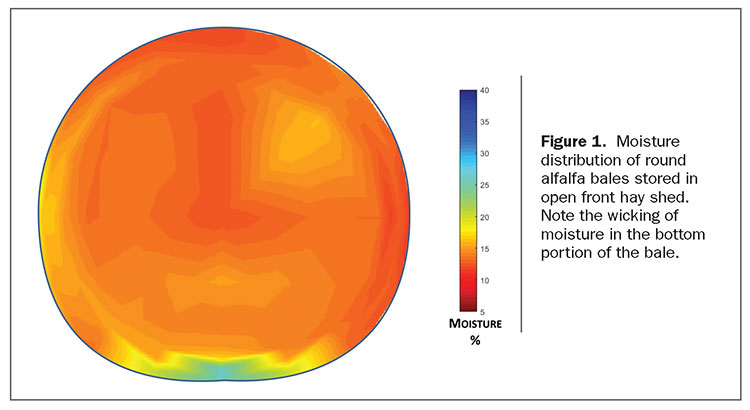 Although bales stored indoors can also be subject to losses if the environment isn’t managed, these bales generally conserve their value very well. Figure 1 represents moisture distribution within a bale stored in an open front hay shed. Although the bottom of these bales wicked moisture from the dirt floor, the vast majority (98%) of the sampling area in the bale was less than 20% moisture. 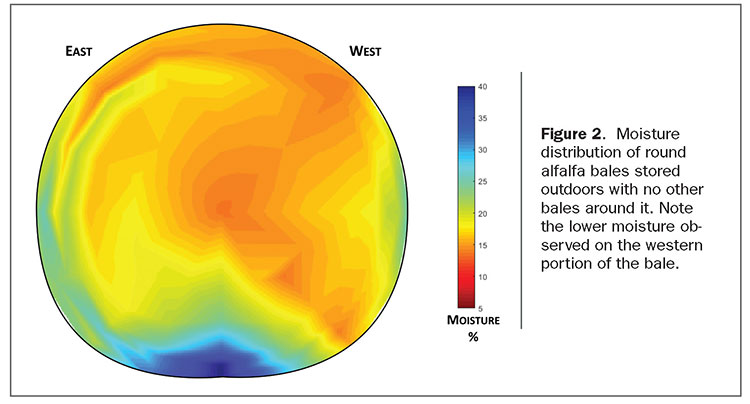 Indoor storage isn’t the only place that the bale environment can be managed. In Figure 2, spoilage might be relatively limited when bales were stored outside with no other bales directly in contact with each other. This might be similar to rowed bales with a large gap between the bales in the row and between the rows. Since air movement was not restricted by any neighboring bales, these bales could dry out after precipitation. Consequently, only about 15% of the sampled area was above 22% moisture.

It is common for producers to row bales with the bales butted tightly together. No matter how tightly these bales are pushed together, it is still possible for water to drain between the vertical faces of the bales. Additionally, this practice limits air movement and sunlight on these surfaces. Consequently, it is more difficult for these bales to dry after rainfall. 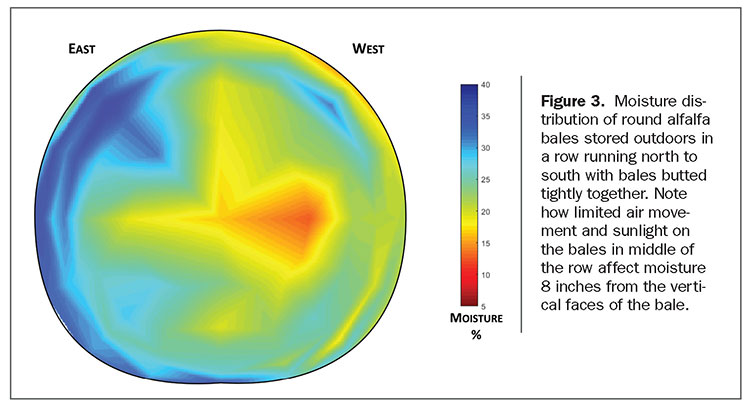 In Figure 3, we see that about 66% of the sampling area of these bales was above 22% moisture. This result might show the value of leaving a space between bales, although in regions with high snowfall, this practice can lead to snowpack between bales. Note that the moisture is less on the west side of the bale because the higher afternoon temperature promotes drying of that side.

When rowing bales, the common recommendation is to leave a space of 3 to 4 feet between rows to allow the bottom quarter of the bales to dry. If this space is not left between the rows, water runs down into the “gutter” formed by the touching bales. 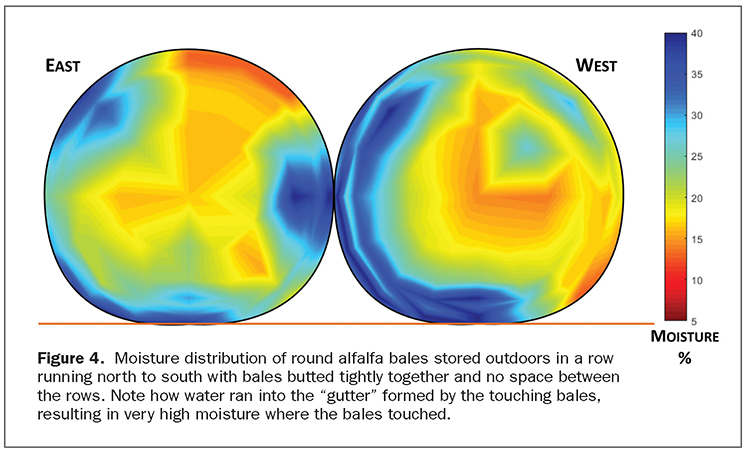 Figure 4 shows that moisture can be very high where the bales touch. Note how the top left-hand quarters of both bales are relatively dry because the afternoon sun dries these areas. The sun cannot dry the bottom quarter of these bales, so more than 20% of the sampled area of the right-hand bale was greater than 30% moisture, raising concerns about spoilage in this area. 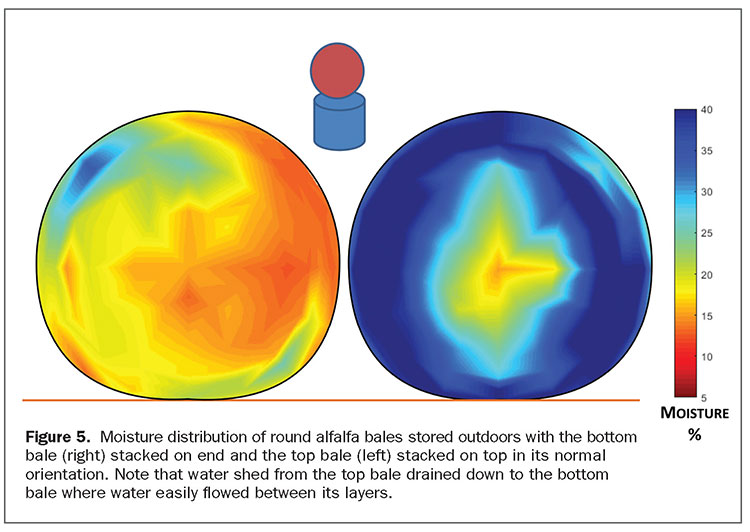 Producers often like to stack bales because it reduces storage space. Unless these bales are also covered, this practice may lead to poorly conserved hay. Figure 5 shows a common practice of stacking bales in a “mushroom” manner — the bottom bale placed on end and then a bale stacked on top in its normal orientation. The top bale was open to the atmosphere on all sides, so it was very dry throughout — about 90% was less than 22% moisture.

Unfortunately, the water shed from the top bale drained down to the bottom bale. Rain and snow can also collect on the exposed flat top surface. Since this bale was placed on end, water could easily flow down between its layers, and in this case, over 45% of this bale was greater than 35% moisture. As a result, there was extensive spoilage and mold observed in these bottom bales when measurements were taken. Outdoor storage of bales placed on end negates all the storage advantages of making a round bale. 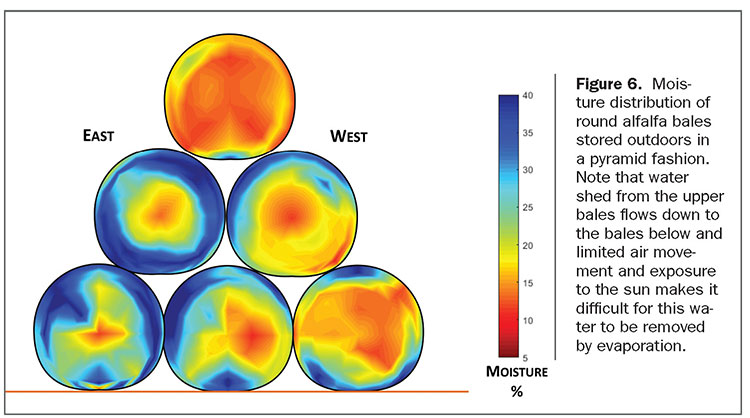 Another common space-saving practice is to build a “pyramid” of bales. Figure 6 shows that although this storage method is very space efficient, water shed from the upper bales flows down to the bales below. Since the lower bales will have limited air movement and exposure to the sun, water drained from bales above cannot readily be evaporated.

Over 35% of the sampled area was above 30% moisture on the two bales on the east side of the pyramid. In any storage scheme where bales are stacked, the lower bales will lose integrity as they spoil. These softer bales will then squat so that the bottom bales have more contact with the soil and the bales above, which often leads to even greater spoilage.

A lot of time and treasure is invested in every round bale you make. Make an effort to conserve this feed resource by following recommendations in the accompanying text box.

This article appeared in the March 2020 issue of Hay & Forage Grower on pages 6 to 8.

Horses are getting fat — hay growers can help Next