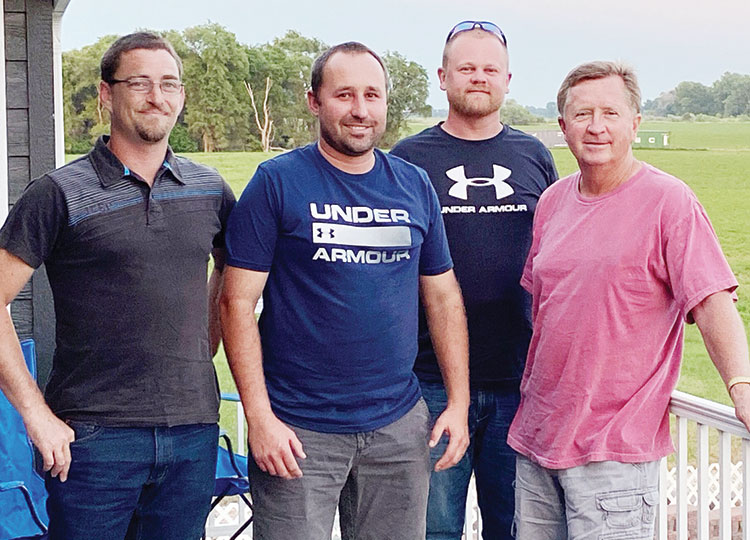 It’s been about 20 years since southeast South Dakota alfalfa producer Mike Brosnan recognized the need to look outside the United States for seasonal workers who could help with hay harvest throughout the summer.

Brosnan’s son-in-law, one of his daughters, and his wife work with him on the farm to grow about 2,500 acres of alfalfa and 5,500 acres of corn, soybeans, and occasionally winter wheat. Each growing season requires extra workers to get the job done.

Over the years, the American workers who responded to Brosnan’s annual “Help Wanted” ads repeatedly moved on to new opportunities, leaving him continually searching for help.

“When I delivered hay to a South Dakota farm one summer, the employee working there had a bit of an accent,” Brosnan said. “When I asked him where he was from, he said South Africa.”

Brosnan visited with the farmer about his satisfaction with bringing workers from South Africa. After learning more about the process to secure workers from that country, Brosnan decided to try securing two hired hands the following year.

“That first year, one of the men who came worked out really well. The other one didn’t,” Brosnan said. “The one who did well, returned each season for another four or five years. During that time, he recommended other men from his area that he knew were looking for work.”

The second year Brosnan brought South Africans to the farm, he hired three men. Typically, the men who come board a flight that begins in Johannesburg, and after some 20 hours of travel, they arrive in Sioux Falls. Generally, Brosnan brings hired help in about April 1. They work on the farm until November. Once the growing season ends, the men return, often to family farms in South Africa, where that country’s growing season is just beginning.

The first few years that he brought in help, Brosnan rented an apartment in his hometown. After a few years, he rented a house in the country for the men who came.

Several years ago, Brosnan built a new shop on his farm that included a four-bedroom apartment so the men he brings over can stay right on the farm. Each bedroom in the apartment has a set of bunk beds, which allows Brosnan to provide housing for as many as six workers. His need for workers fluctuates each year, depending on how many acres of alfalfa are under cultivation and what kind of yields he anticipates.

“That apartment has worked really well for these guys,” Brosnan said. “We also provide them with a vehicle, and they come and go as they need to.”

One reason South African workers are a good match for American farms such as Brosnan’s is that the growing seasons are opposite. Young men who have or want experience working on a farm can spend South Africa’s winter months earning income in the United States.

“Some workers who come here speak English as well as you or I do,” Brosnan said. “Others find it more difficult to communicate.”

Farms in South Africa have fairly modern implements, which helps them quickly learn to operate Brosnan’s haying equipment. That’s not to say that equipment is never damaged due to lack of experience.

“These guys are usually really good at fixing any breakdowns,” Brosnan said. “In South Africa, it’s difficult to find repair materials and really hard to get repair parts in a timely manner. It’s not like here, where we’re 15 minutes from the nearest John Deere shop.”

Brosnan’s workers come to the U.S. through the nation’s H-2A program, which was implemented in 1986 to provide temporary, seasonal farm labor from foreign workers. Typically, the process for securing workers is lengthy, complex, and expensive.

“There are people across the U.S. who help farmers like us complete the paperwork process,” Brosnan said. “We’ve used at least three different companies to do that. Currently, we work with a woman in North Dakota who knows how to complete the process. Her husband brings South African workers to his farm, and she has a contact in South Africa. You have to have a contact there in order to complete the visa process.”

Generally, it’s February when Brosnan determines how many helpers he’ll need for the season. He must submit applications for workers about eight weeks in advance of when he expects to need them.

Most workers who apply to fill the visa requests are 24 or 25 years old. The oldest worker Brosnan brought over was in his early 50s.

In addition to traveling costs, Brosnan and other farmers bringing in temporary workers from South Africa pay U.S. fees and fees in South Africa as part of the visa process. The farmer bringing workers to his operation must provide housing but isn’t required to provide daily meals.

While workers with an H-2A visa are in America, they aren’t allowed to work for anyone except the farmer who completed the visa application. When the season ends, they are required to return to their own country.

“One of our South African workers came back every year for about eight years,” Brosnan said. “Most come back for an average of five years.”

For the most part, workers coming to Brosnan’s farm have not experienced any kind of discrimination or abuse from the outside community. One factor affecting that may be that North and South Dakota are two states where South Africans seeking work want to come, and their presence in the community has become more commonplace.

“I think they like to come here because it isn’t as hot and humid as it is in our Southern states,” Brosnan said. “The climate in South Africa is generally pretty dry. Snow and ice there are very rare, and the guys who come here hate cold weather.”

Brosnan is not at all opposed to hiring American workers. He still runs “Help Wanted” ads every year. Legally, if an American worker applied for a job on his farm, Brosnan would have to hire them.

“Generally, I don’t receive any applications from American workers,” Brosnan said. “The South African workers we’ve brought over differ from some of employees we’ve had in the past in that they are dependable. They always show up on time and hardly complain about anything. They’re here to earn money, and they know how to hustle. There’s always an exception out there, but most of them have a very good work ethic.”

Brosnan doesn’t have any real issues with America’s H-2A visa process, although he believes streamlining it would make the entire process easier.

In the beginning, Brosnan and a handful of other farmers in southeast South Dakota were the only ones bringing in South African workers. Currently, the practice is much more widespread because farmers have had more difficulty securing seasonal workers from the region.

This article appeared in the August/September 2020 issue of Hay & Forage Grower on page 14.

Save the land, make a profit Next

This father-son duo was born to chop Previous