Save the land, make a profit

By C.J. Weddle
The author is the 2020 Hay & Forage Grower summer editorial intern. She currently attends Mississippi State University and is majoring in agricultural education, leadership, and communications. 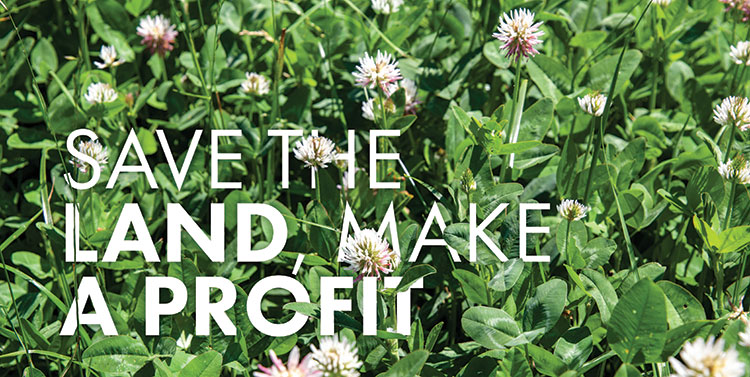 Kura clover in some of Jim Munsch’s paddocks was introduced to his farm during a University of Wisconsin demonstration project.

He wasn't always a farmer. In fact, most of the first half of Jim Munsch’s adult life was pretty far removed from the farm scene, but he has always had a connection with the land and a passion for agriculture.

Helping his mother’s family raise hogs and a few crops on a 220-acre farm near Wabash, Ind., led him to study agricultural engineering at Purdue University. When his family lost the farm to a government flood control project, he decided to stay and pursue a master’s in business. This was followed by a career in the Army where he was stationed in Europe.

When Munsch returned stateside, his travels continued as he worked with an air conditioning company headquartered near La Crosse, Wis. In 1978, Munsch and his wife, Phylis, moved onto a 100-acre farm, near Coon Valley, Wis., and proceeded to build a home.

Today, Munsch farms the original 100 acres along with nearly 100 more acres rented from a couple of neighbors.

“The two goals I had in mind when I started this farm are still the two that drive it today,” Munsch vowed. “One: Save the land. Two: Make a profit.”

The entirety of Munsch’s farm, like much of Coon Valley and western Wisconsin, rests on land that the Natural Resources Conservation Service (NRCS) qualifies as highly erodible with steep slopes, and it is often farmed in 50- to 60-foot wide contour strips to help farmers manage erosion.

“At first, I rented the land out to a neighbor, and after seeing the erosion that happened, it just made me sick,” Munsch said.

His bachelor’s degree in agricultural engineering focused on soil and water conservation. The loss of his land to erosion pushed him to try his own hand at farming. So, he bought a Farmall H, a two-bottom plow, and an old disk, then put the crops in himself.

Following an older conservation plan, Munsch rotated the 40 tillable acres he had at the time with hay, corn, oats as a cover crop, and then back into hay. He was still seeing erosion, was not getting great yields, and couldn’t catch a break with market prices. It made him sick and frustrated.

Something had to change

“In the early 1990s, the managed grazing trend kicked up a notch,” Munsch said. “I knew a couple of strong proponents for managed grazing. I read the books, and I went to as many pasture walks as I could.”

The result of this bootstrap effort is the perennial managed pasture, hayfield, and swing field system Munsch uses today. The swing fields are used for either hay or grazing depending on the time of year and forage availability. He joked, “Like the old pasture guys would say, the first thing we planted was fence posts.”

After he finished the fencing infrastructure, Munsch decided not to plow his fields anymore. All of the hilly pasture and tillable land is now managed pasture. Since 1992, his land has been undisturbed. It does, however, receive an annual frost seeding of several clover species, some of which were established during a demonstration project sponsored by the University of Wisconsin (UW) that Munsch participated in several years ago.

Munsch has kept his land undisturbed since 1992 and annually frost seeds with several clover species.

Munsch was introduced to kura clover as part of the demonstration. While he doesn’t recommend the legume to farmers who need immediate forage, he says that once established, it is very persistent. He confirmed that it does exactly what the UW-Extension agents said it would. “It sleeps; it creeps; and then it leaps,” Munsch said as he pointed out a patch of clover that was en route to the leaping phase.

Munsch also noted that he has planted almost no grass seed on his property; what’s there is from plants reseeding themselves and natural seedbanks of grasses seeded by past owners. Most of his pastures are comprised of cool-season grasses such as orchardgrass, smooth bromegrass, timothy, and native meadow fescue that flourish in this management system.

His journey into managed grazing helped meet his goals. Erosion has all but stopped with good ground cover. Profitability is helped by achieving yields significantly higher than set-stock grazing with virtually no additional input costs. Over time, organic matter has doubled, making the pastures more drought tolerant.

The agricultural engineering degree is not the only one Munsch uses as a farmer and consultant. His master’s in business helps him utilize data to make economic decisions that drive success for him and his clients.

Munsch decided to retire and settle from his corporate traveling lifestyle and farm his own land. He quickly gained financial consulting clients made up of farms and small businesses. While teaching them financial management techniques, the University of Wisconsin implemented a few of his teaching tools as well, leading to a working relationship between Munsch and the Center for Integrated Agriculture Systems (CIAS) that has been active for nearly 20 years.

Another facet of financial management for the farm is being a stickler for sound nutrient management.

“The only nutrients I am shipping off the land are those in the animals sold, and, with no erosion, everything else stays right here,” he said as he motioned to the fields around him. Nutrients are added when he purchases hay, and his legumes provide nitrogen free of charge from the air. Munsch has not applied fertilizer in 30 years.

Even with most of the nutrients staying on the farm, that doesn’t mean they will always be distributed properly. Manure is a great agent for reapplying nutrients to the land; however, cattle are creatures of habit, and his 35-cow herd will sometimes gather in a favorite spot for most of the day, Munsch noted.

This is when farmers need to be clever and creative, he added. Paddock design can greatly affect the behaviors of cattle and the spread of nutrients.

“Having water tanks in every single paddock is not just something cool to do. It’s part of my nutrient management plan,” Munsch remarked.

He went on to explain that cattle are herd animals, and having only one large water tank in or near the barn can lead to lots of problems while grazing.

“First, when one goes, they all go,” noted the spry 81-year-old. “By the time the lead cow has had her drink and is returning to the pasture, the slow cows are just getting to the tank. While most get their fill, some don’t.

“Also, if you have a cow that’s just delivered a calf in the pasture and is still tending to the newborn, she gets left behind when the rest of the herd goes to the distant water point. Then, you have a stressed momma cow that is probably expressing it in milk production, and that’s certainly not what you want,” Munsch asserted.

Finally, the farmer-consultant related that cows spend a large amount of time moving themselves and the nutrients. The activities Munsch wants to see from his cattle are grazing and resting. Hiking back and forth for water expends a lot of energy. The nutrients from the pasture are also being moved to the barn as opposed to being deposited on the paddock they were taken from.

The small water tank in each of Munsch’s paddocks helps eliminate these problems. 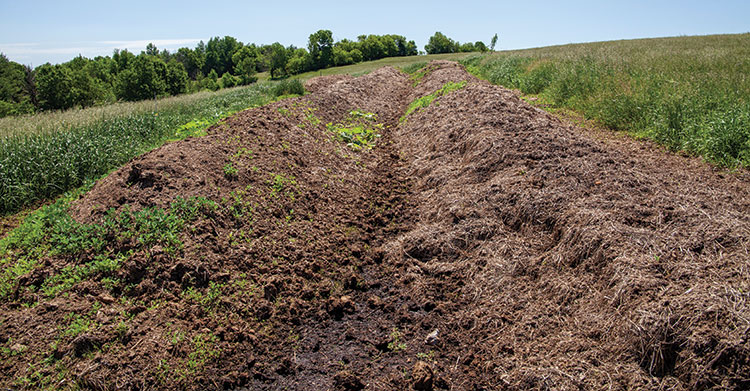 Winter bedding packs are composted and used as fertilizer on hayfields.
Another component to Munsch’s nutrient management plan is composting. Munsch dedicates some rented fields to provide dry hay and baleage for his cattle over winter. Because the cattle spend the worst of the winter months near the buildings and water, these nutrients are not being reapplied to the land they come from.

To remedy this, Munsch creates bedded packs in hardened areas near his buildings and at strategic locations in the winter paddocks. Come springtime, the bedded packs are removed, composted, and later applied to hayfields, returning nutrients to the soil in an available form. 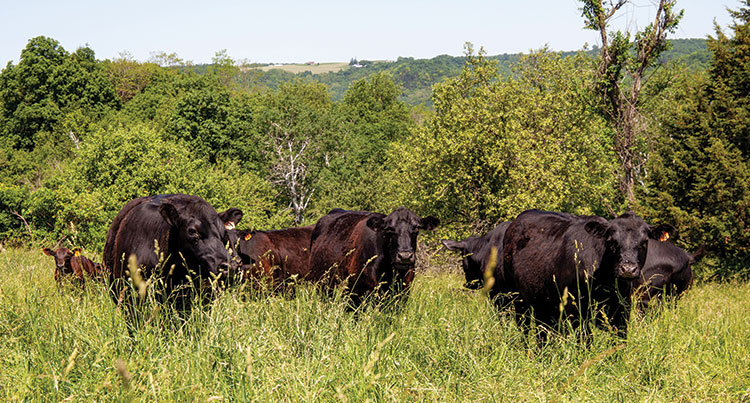 Born during spring out in the paddocks, Munsch’s calves are ready for market within 20 to 23 months.

During his early farming years, Munsch made a connection with a local organic vegetable farmer who also had a community-supported agriculture (CSA) program. The CSA provided Munsch with a new market for his beef.

To comply with this new market, he had his farm certified organic, and Munsch saw an immediate price jump. About 15 years into the partnership, the vegetable farmer started buying farms suited for finishing beef. Consequently, Munsch needed to either become a cow-calf operator and calf supplier, or move on to different opportunities.

“Grass-fed beef became popular, and I decided we would chase that market around 2006 and let my organic certification expire,” said Munsch.

Marketing his beef this way, Munsch sells a few early feeder calves to people finishing grass-fed beef, and the rest are finished on his farm and rented pastures.

Over the course of 20 to 23 months, Munsch’s cattle finish at a live weight of around 1,200 pounds and hang a 650-pound carcass, usually grading low choice.

He sells a quarter of his cattle directly to consumers and recommends facilities to process grass-fed beef. The remaining finished cattle are sold to grass-fed beef co-ops in Wisconsin, which handle all processing and distribution decisions.

“Animal science guys say there are about 20 different things that can make meat tough, and about half of them occur after the animal goes off the farm,” Munsch said. Because of this, he is very selective when recommending processing facilities to his direct-marketing customers.

To earn his approval, processors must have functional handling facilities, well-designed kill floors, and proper aging rooms and storage space. Another important factor includes knowing how to treat animals on the hoof and as a carcass.

If a processor meets all of his requirements, it earns a spot on his recommendation list. He explained that if people have tough meat and aren’t satisfied, it comes back on him as the farmer who raised it – not on the processor.

Like many other agricultural markets, COVID-19 has caused some major changes to Munsch’s normal demand cycle for grass-fed beef; however, unlike some markets, his demand has skyrocketed.

“Right now, people call wanting beef, and I tell them maybe in 10 months when we can find a processing slot,” he explained.

This article appeared in the August/September 2020 issue of Hay & Forage Grower on pages 18 to 20.

He wanted a better way to feed hay Next