Some land is better suited for hay 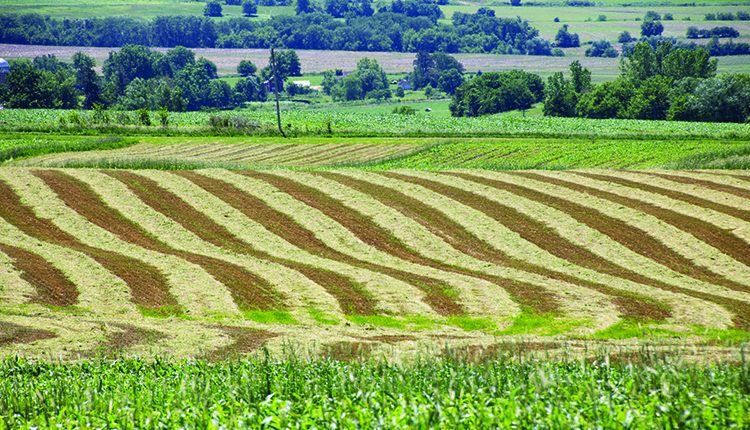 Would your marginal land be more profitable for hay production rather than corn or soybeans?

“It comes down to determining if you have a local hay market or if it’s feasible to truck hay to buyers,” Brown said. “You need to decide what kind of hay to grow and whether or not you have to invest in equipment. Those are a few of the many questions that need consideration.”

In addition to varying weather conditions from year to year, hay producers deal with hay prices that typically decline as winter months come to an end. At that time, dairy farmers are waiting on new crops and beef producers are taking cows back to pasture.

The cost of establishing alfalfa is considerably higher than planting grass mixes. However, seeding is only necessary every four or five years for a well-managed alfalfa. If irrigated fields are an option, harvesting high-quality hay may be more manageable.

Alfalfa produced in a rotation system that includes corn may reduce corn nitrogen needs for up to two years. A healthy alfalfa crop can reduce nitrogen needs for a following corn crop by up to 100% the first year and 50% the second year.

“One disadvantage of hay production is there’s no board of trade futures contracts,” Brown said. “Although you may be able to negotiate a contract with a customer, there’s usually no way to lock in prices the way futures are used to hedge commodity prices.”

The soil will tell you

Brown points to the use of the Corn Suitability Rating (CSR) as a means to help determine whether or not marginal land is better suited for hay production. CSR is an index that rates soil types for potential row-crop productivity. Early concepts for rating productivity were developed by Iowa State University (ISU) scientists back in the 1940s.

A major advance in the science came in 1971 with Thomas Fenton’s ISU publication describing CSR. Fenton, an ISU professor of agronomy, used inherent soil properties (60 to 80 inches deep), average weather, and the potential of different kinds of soil for row-crop production to develop the most sophisticated and complete quantitative soil productivity ratings available in the world.

Since 1971, the knowledge base of soil properties has been significantly enhanced and expanded, making CSR ratings, currently known as CSR2, more robust. An average Iowa CSR rating is 75.2.

“If you have a CSR rating in the 60s or below, using it to produce corn or soybeans may not be the best alternative,” Brown says. “That’s especially true in areas with rolling hills, where you typically have erosion issues. Hay provides much better protection for these types of soil in a rotation where you’re growing row crops.”

Conversion of cropland to hay production may require a two- or three-year planning period. Prior to transitioning to hay production, Brown advises reviewing past applications of herbicides to ensure that carryover doesn’t hamper establishment of a new hayfield.

Currently, the cost of establishing a hay crop is approximately $380 per acre, with seeding requiring about $150 per acre. Part of the planning equation includes estimating the cost of haying equipment.

“It’s possible to hire a custom forage crew for harvesting,” Brown said. “Before making these kinds of changes, it’s advisable to look at the farm operation as a whole and compare alternative uses for each field before finalizing a plan.”

This article appeared in the November 2020 issue of Hay & Forage Grower on page 21.